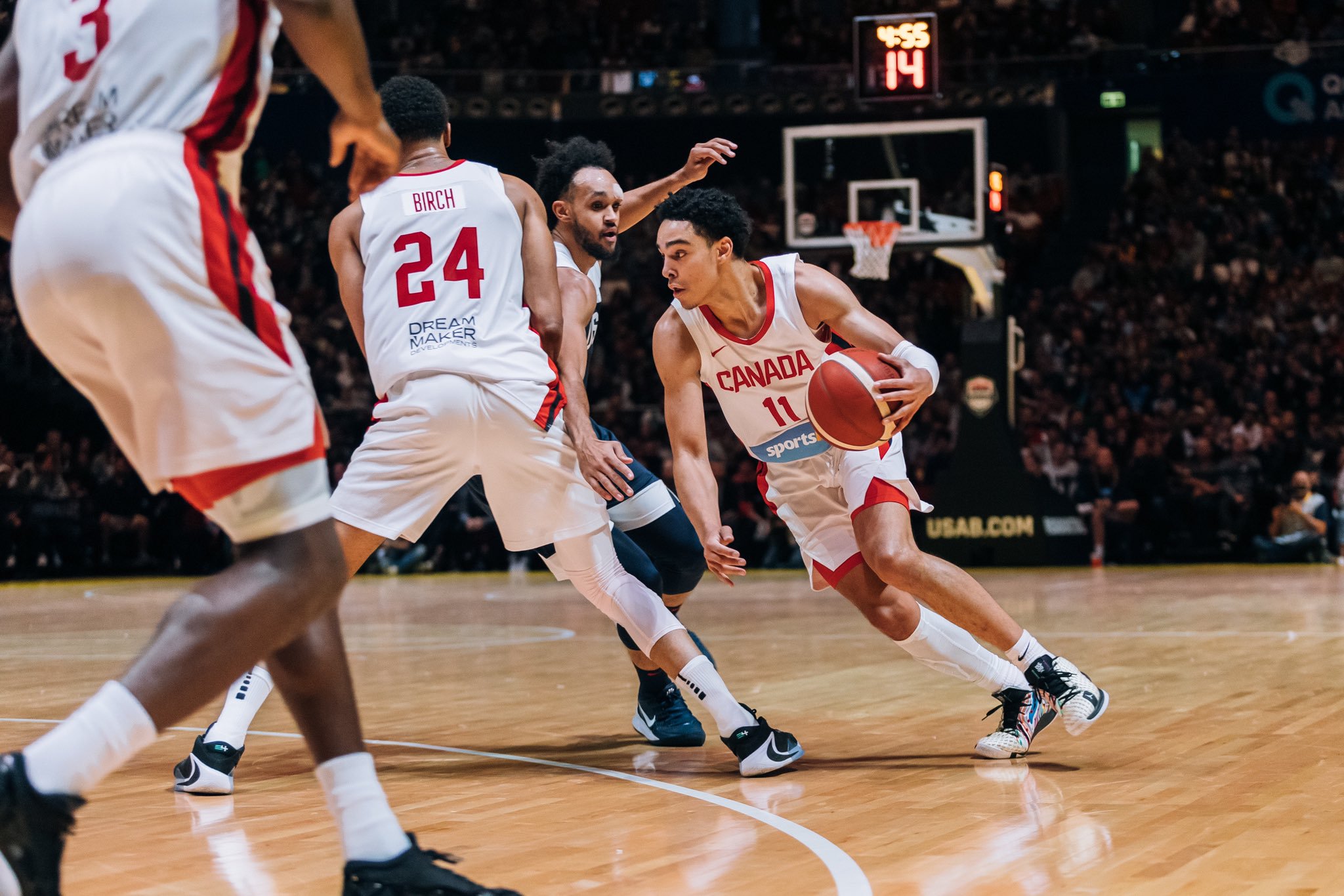 SYDNEY, AUSTRALIA (August 27, 2019) – The Canadian Senior Men’s Basketball team dropped an 84-68 decision to the United States in their final exhibition game in Australia before heading to China for the FIBA Basketball World Cup 2019.

Kyle Wiltjer scored a game-high 21 points, including 11 in the fourth quarter for Canada, while Khem Birch added 13 in the loss. The United States were led by Jaylen Brown’s 19 points, as well as a 10-point, 15-rebound double-double from Myles Turner.

“You don’t play great every night,” head coach Nick Nurse said. “They’ll be fine. We just flush this one away and get back to what we’re doing.”

Canada was without Oshae Brissett who missed the game due to injury, but saw the return of Andrew Nembhard and Brady Heslip. Nembhard left the game after a fall early in a win against New Zealand last week, while Heslip joined the team in Australia for the first time. Despite having the two back in the lineup, Canada was unable to overcome a slow start in the first quarter on Monday night.

“I don’t think we played very well tonight,” Nurse said. “I think we’ve been playing pretty well, with a lot of juice and spirit and energy and I think you could almost sum that game up in the first four or five possessions [of the game].”

Donovan Mitchell scored the first two baskets of the game to give USA an early 5-0 lead. A fadeaway from Kevin Pangos put Canada on the board at the 7:09 mark, but Team Canada struggled to see their shots fall in the early going and connected on just three more field goals the rest of the quarter. After starting just 3-for-17 from the floor, Canada finished 4-for-20 in the quarter, giving up 41 percent shooting to the United States to trail 20-9 after one.

Canada put together a 12-5 run that was capped by a Wiltjer jumper to get within five with two minutes remaining in the half, but Team USA closed the quarter on an 11-1 run to take a 46-31 lead at the break. Canada shot 27 percent from the floor in the first half, as the United States shot 48 percent. Neither team was particularly successful from deep, with Canada making 3-of-14 attempts from three, while the United States connected on just 2-of-8 attempts. Jaylen Brown led all scorers with 13 points in the half.

Khem Birch opened the scoring in the second half with a layup at the 8:26 mark, then followed that with a tip in on Canada’s next possession. After a pair of free throws from Melvin Ejim trimmed Canada’s deficit to 52-41 midway through the third, the United States scored eight straight to stretch the lead to 60-41 with three minutes remaining in the quarter as Canada called timeout. Out of the timeout, Wiltjer scored Canada’s final six points of the quarter, but the Canadians went into the fourth trailing 64-47.

Wiltjer continued to light it up in the fourth, scoring 11 of his game-high 21 in the quarter. Despite Wiltjer’s scoring boost off the bench, Canada was ultimately unable to overcome the early 11-point lead at the end of the first quarter, as Canada was outscored by just five points over the final three quarters.

“We’re just learning a lot about each other,” Wiltjer said. “Games are the best way to prepare and we’ve got a great coaching staff. The film doesn’t lie. We’re going to watch it tomorrow, clean up some things.

“We’re really grateful we’re able to come out here and prepare for the World Cup.”

For first-time Team Canada head coach Nurse, the stay in Australia provided necessary time for players and coaching staff to get familiar.

“I’ve learned a lot about them,” Nurse said. “I’m a new coach [for this team], and they’re still trying to learn me, I think and we’ve made a lot of progress.

“I think our guys have made a lot of strides, play hard, have chemistry,” he said. “We’ve been really competitive, fun to watch, we’ve defended, moved the ball, all that stuff. We’ve played great. We don’t expect to play perfectly every night, or even to play well every night.”

Canada finished 3-2 in its five-game exhibition slate in Australia, after splitting a pair of exhibition games played in Canada against Nigeria. The team will now head to China in advance of the FIBA Basketball World Cup 2019 which begins Aug. 31.