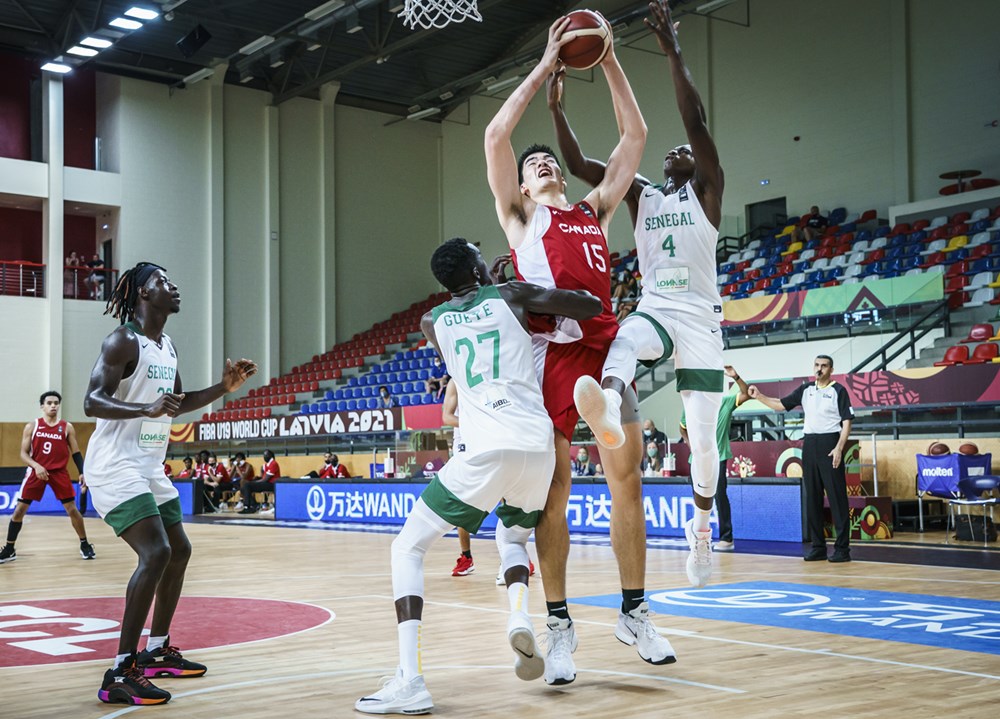 By Shaun McLeodJuly 6, 2021No Comments

During their first two games, Canada started slow, trailing Japan after one, and digging a deep hole against Lithuania before a heroic comeback in the fourth quarter. Against Senegal, Canada finally bucked the trend with a blistering 27-13 first quarter showing behind Zach Edey’s nine points and Ryan Nembhard’s seven points off two deep threes.

Edey, who had brief consideration for the senior men’s national team for the FIBA Olympic Qualifiers in Victoria, continued his dominant showing with 18 points, 17 rebounds and two blocked shots. He currently leads all players in rebounding 15.5 rebounds a game – the next closest being Korea’s Jun Seok Yeo with 11.

Senegal struggled with the Canadian length and athleticism throughout the game turning the ball over 19 times and outside of Dahaba Magassa’s 15 points and Babacar Sane’s nine points were unable to find a way out of the deficit they built in the first half despite slowing Canada down significantly in the third quarter.

Nembhard finished the game with 17 points, eight assists, four steals and four rebounds in his most complete showing so far as the lead point guard for Canada. When Nembhard is off the floor, there’s a noticeable drop in offensive consistency for Canada as they rely on Mathurin and Houstan for the bulk of their ball-handling as back-up point guard Kyle Duke has yet to find his place in the rotation.

As Canada goes deeper into the tournament and towards the potential marquee matchups with the Chet Holmgren and Jaden Ivey-led Americans and Spain, they’ll need to find a way to start converting on open looks from three. Nembhard carried the three-point shooting this game with 57 percent on seven shots from beyond the arch, but the rest of the team shot just 20 per cent from deep.

The Canadians will now be moving on to the round of 16 where they’ll likely be facing Iran, led by centre Parsa Fallah, as the fourth-place team in Group B before having a rest day on Thursday if they advance to the quarter-finals.