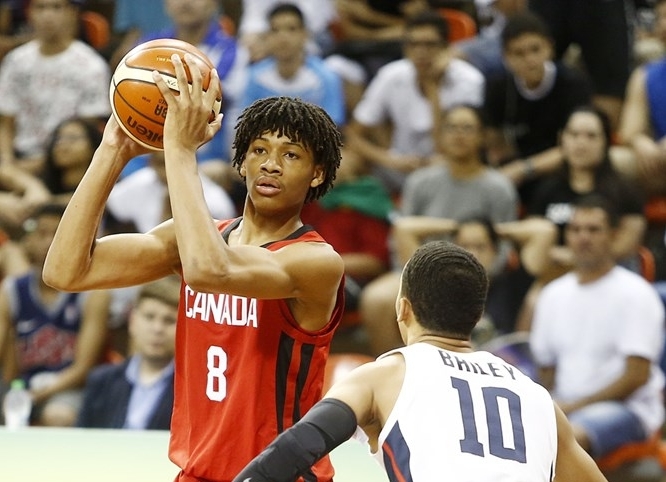 BELÉM, BRAZIL (June 9, 2019) – Canada finished second at the FIBA U16 Americas Championship 2019 following a 94-77 loss to the United States of America on Sunday night.

This was Canada’s third consecutive silver medal at the FIBA U16 Americas Championship.  In their sixth appearances since the tournament began in 2009, Canada has medaled in each of their previous five tournaments.

Caleb Houstan once again led the way for Canada with a game-high 25 points. Ryan Nembhard finished with 21 points and nine assists, while Enoch Boakye had a double-double with 12 points and 13 rebounds.  Christopher Livingston had a team-high 23 points for the USA in the victory.

Following the game, Houstan and Nembhard were both named to the FIBA U16 Americas Championship 2019 All-Star Five.

A back-and-forth first quarter with five different lead changes saw Canada trailing by just one point after the opening 10 minutes action.  However, a 9-0 run from the United States midway through the second, stretched the deficit to 31-20.  Canada entered halftime trailing 45-32.

The Canadians answered early in the third quarter with a 5-0 run of their own to shrink the USA lead to 45-37.  Canada continued to chip away at the deficit, working it down to just six points, 55-49, midway through the third.  However, just as they’d done all night, the United States once again countered and entered the fourth with a 72-57 lead.

Canada hung tough with the defending FIBA U16 Americas champions but couldn’t complete the comeback as they ultimately fell 94-77.

With a top-four finish at FIBA U16 Americas Championship 2019, Canada has successfully qualified for the FIBA U17 Basketball World Cup 2020.