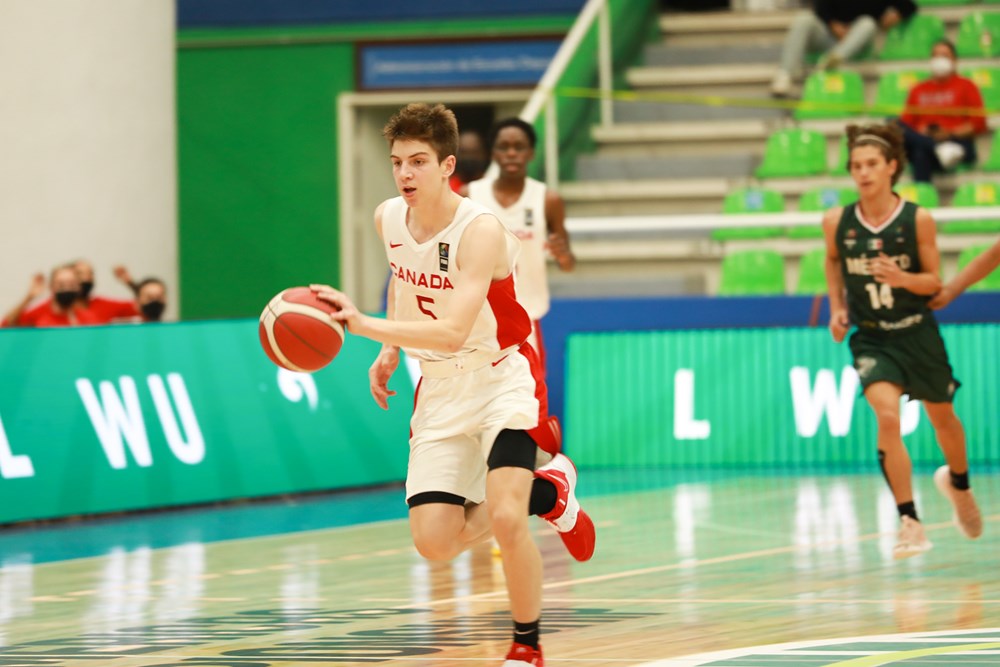 By Shaun McLeodAugust 25, 2021No Comments

The Canadian U16 men’s national team bounced back with a massive 85-49 win over host nation Mexico at the FIBA U16 Americas Championship.

“I thought we had a really great game today,” said Jacob Theodosiou. “We bounced back from a tough loss against Argentina and made the corrections we needed to from yesterday”

United Scholastic Academy prospect forward Efeosa Oliogu stepped up in the opening quarter and had nine of his 15 points and had a highlight-reel dunk in the first quarter. While Mexico battled hard behind Alberto Mendonza’s early seven points, Canada put the clamps on defensively in the final minutes of the quarter and began to pull away, ending the frame up 24-15 on an Ishan Sharma buzzer-beater.

Canada continued to lock down Mexico defensively in the second quarter and Oliogu had another candidate for dunk of the tournament with a windmill jam off of a mid-court steal. Oliogu also contributed to the chaos created by the Canadian defence with three steals.

While Mexico had solid performances from Charles Georgelos, who had 12 points and 10 rebounds and Andres Lozano who had eight points and three rebounds, they were unable to crack the Canadian’s interior anchored by Olivier Rioux who had two blocks, six points and 15 rebounds. Charles Yeiy continued his impressive defensive streak with two blocks as well.

Canada found easy buckets from their success on defence and had several standout offensive performances alongside Oliogu’s and Rioux’s. Theodosiou had 14 points and four rebounds and four assists and Mikkel Tyne followed up his solid first game with 15 points. Stefan Vojnic and Baraka Okijie both chipped in eight points as well.

Canada will now face Brazil in their final match of the group stage on Wednesday before getting a rest day on Thursday.This will be just the second time that Canada has faced Brazil at the FIBA U16 Americas Championship, with Canada winning the last matchup 90-67 in 2019.

“We need to bring what we did today into the game tomorrow, and I think we’ll be good against Brazil,” Theodosiou said.