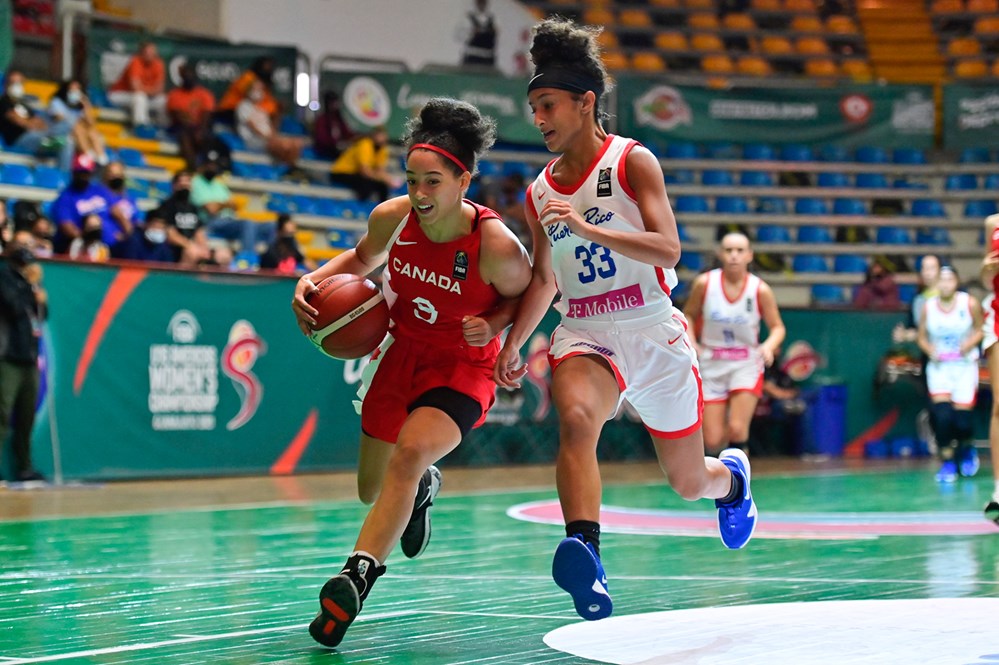 By Kyle OliveiraAugust 25, 2021No Comments

After already racking up back-to-back landslide victories in the group stage, the Canadian Women’s U16 team solidified first place in Group A with a dominant 102-50 victory over Puerto Rico on Wednesday afternoon.

The win puts Canada at 3-0 on the tournament, and drops Puerto Rico to 2-1, good enough for second place in Group A.

The Canadians were led by Delaney Gibb on Wednesday, who was just one contributor in a long list of them. Six players for Team Canada scored in double figures, with Gibb totaling 23 on 9/17 shooting and grabbing 11 rebounds for the double-double. Bree Robinson made an impact off of the bench with 13 points in 20 minutes, and Jada Bediako scored 13 points to go along with 7 boards. Canada shot 46% from the floor and an impressive 40% from beyond the arc, frequently turning defence into offence and getting quick baskets within the tempo of the game.

Much like the previous two matchups for Canada, the first half was key in building the foundation for a comfortable blowout win. The Canadians offence caught fire early and led 29-18 after the first frame, and went on to dominate the second quarter, outscoring Puerto Rico 27-7 which gave them the comfortable 56-25 halftime lead. The second half was more of the same from Canada; complete control on both sides of the floor and playing time spread amongst the entirety of the roster.

With three wins in three days, Canada secures first in Group A and will go against the last-place team in Group B in the Quarterfinals on Friday, after a day of much deserved rest in between. The path for the Canadians will be favourable until a potential finals meeting with the USA on Sunday in a clash that would surely be one of the games of the tournament. After their three group matches, Canada sits at a plus-minus of +165, a massive number that can only be compared in this tournament to the USA who is +177 through only two games.

Barring a surprise upset on Wednesday evening, it looks likely that Canada’s quarterfinal opponent will be Chile, although that is not yet confirmed. Chile are currently 0-2 with a -110 point differential, and so the Canadians would be massive favourites heading into the meeting.

The quarterfinals will take place throughout the day on Friday, and will feature all 8 teams from the group stages seeded in the bracket based on their group play standings.