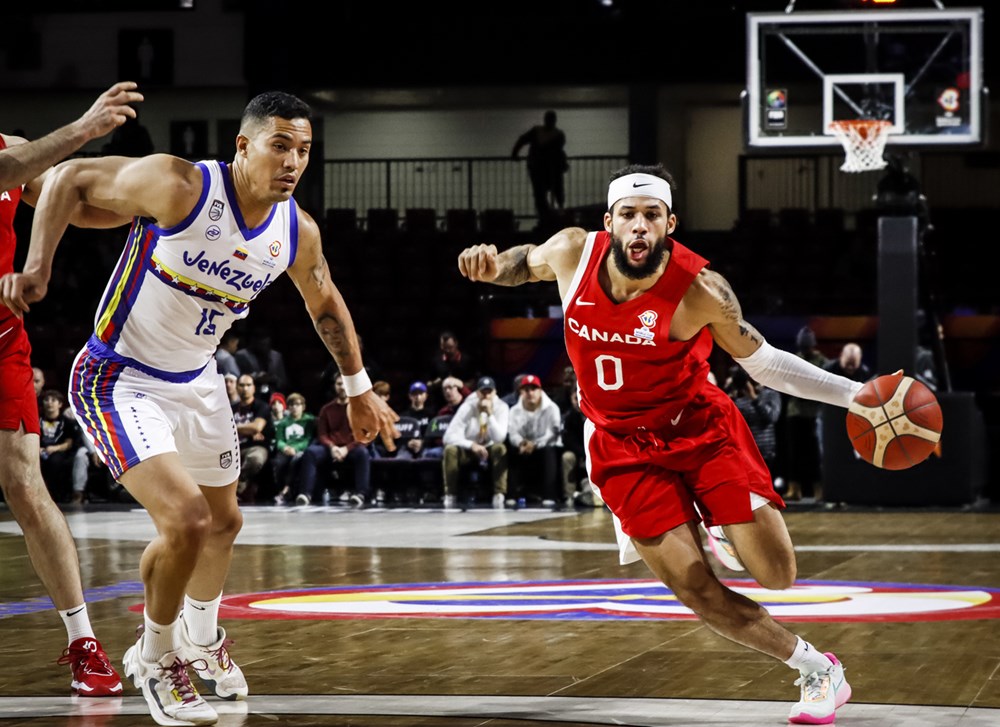 By Shaun McLeodNovember 11, 2022No Comments

Canada is officially headed to the 2023 FIBA Basketball World Cup as they eased to a 94–56 win over Venezuela on Thursday night in Edmonton.

The win sees Canada stay undefeated through nine games in the World Cup Qualifiers, even without their headline players such as Shai Gilgeous-Alexander and Kelly Olynyk, but the big moment for Canada was almost delayed as the Venezuelan team struggled to enter Canada due to visa issues. The issues were mostly sorted out, with 10 visas being given to Venezuela just in time for them to arrive in Edmonton at 4 p.m. MST, just three hours before tip-off.

A fast break bucket to national team veteran Melvin Ejim opened the scoring after two minutes of scoreless offence on either side. Phil Scrubb followed with a three-point shot on the next possession to set Canada on a 12-3 run. Venezuela’s offence finally came to life in the second half of the first quarter, with David Cubillan scoring with five points, but Canada’s depth continued to maintain the lead on the way to a 25-10 lead at the end of the first.

Owen Klassen, who had an 11-point, 10-rebound double-double, opened up the second quarter with a slam dunk for Canada, but Venezuela mounted a 9-2 run led by Jhornan Zamora, who had 14 points on the night, cut the lead to eight. The two teams traded buckets throughout the second quarter, but Canada found buckets at the end of the quarter to take a 46-31 at the half.

Canada came out of the break with an increased emphasis on attacking the rim, and Venezuela began to give up critical fouls, including a six-point possession for Kassius Robertson mid-way through the frame. Venezuela’s tired legs started to give way for Canada’s offence to take over, and they improved their lead to 70-42 going into the last quarter.

Robertson led all scorers with 16 points on a perfect six-for-six shooting night. Kenny Chery, Thomas Scrubb, and Conor Morgan all tied for second with 12 points apiece.

The lead grew in the fourth to 45 in the final frame as Canada costed their way to the victory with head coach Nate Bjorkgren experimenting with Toronto Raptors inspired line ups in the final minutes with almost every player on the floor being six-foot-eight or taller and giving Venezuela fits defensively.

The World Cup gets underway on Aug.25, 2023, a window of time where Canada will have its NBA and NCAA talent available, but Canada’s work in the qualifying window is not done. They’ll have another game Sunday night when they host Panama in Edmonton at 7:10 p.m. EST.