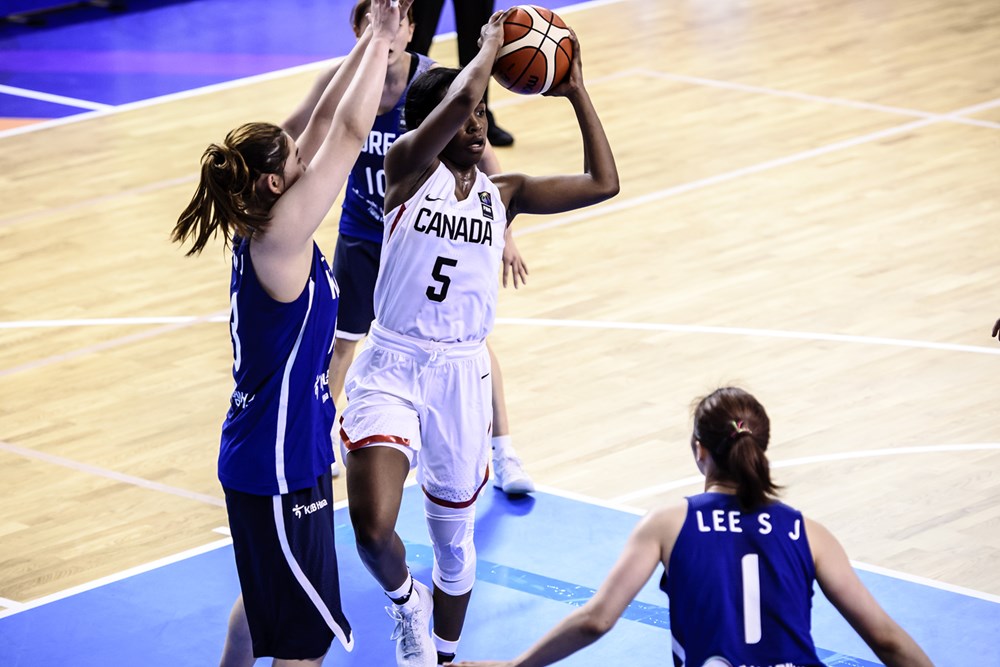 By Mark WilliamsonJuly 23, 2017No Comments

Canada opens up FIBA U19 Women’s World Championship with a 91-45 blowout win over Korea.

It was only two years ago that our U16 Women defeated Brazil 72-71 in Mexico to win Gold in the U16 FIBA Americas after many 2nd and 3rd place finishes dating back to 2004 in FIBA tournaments.

This year five ladies return from that championship team led by Stanford commit Alyssa Jerome who led Canada in scoring, rebounds, assists, and tied in steals.

Michigan commit Hailey Brown, who led team in blocked shots and was second in scoring and rebounding.

Sarah Donovan, Shaina Pellington and the youngest by two years on the squad is Laeticia Amihere comprise Canada’s leading players.

Amihere, a rising star for Canada, went viral after her amazing one-handed dunk back at the end of April in Hampton, Virginia at the infamous Boo Williams Sportsplex.

A newcomer to the squad is Buffalo commit, Hanna Hall who led her team Lincoln Prep to the inaugural Women’s OSBA Championship in April, has such grit and intensity to go with an excellent shot and ball security and is the epitome of heart over height as she stands only 5′ 3″.

Canada enters the FIBA U19 Worlds ranked 4th behind USA, Spain and also France, who they play Sunday, July 23 at 9:45am EST.

Korea came out with a purpose getting two early buckets and putting on some stifling defense on the Canadians, but that wouldn’t last long.

Pellington’s quickness and agility got Canada on the board and she’ll definitely be an integral part for the Canadians in the tournament to pick up the speed.

Once Amihere entered the game, Canada looked more comfortable as a unit. Her hustling and rebounding and her court vision for her young age is remarkable.

Canada went on an 8-0 run mainly in part from their ability to rebound with a height advantage on the Koreans and also getting fouled in the paint on a consistent basis.

The Canadians seem to have nerves in the first quarter, not shooting well and literally throwing the ball away at times. It gave Korea the opportunity to keep the game close after the opening frame only down 12-11.

In the second quarter, Canada pulled away despite the constant 1-2-2 half-court defense by the Koreans. The Canadians’ ball movement stepped up considerably finding the open player underneath the basket, quite often.

After the break, it got worse for Korea as they were outscored 31-11 and faced a massive 69-30 drought after the third. Canada had weapons in many areas behind Aislinn Konig’s excellent shooting beyond the arc, quickness and agility by Hall and Pellington who make tough but excellent passes. Canada rebounded by committee as Amihere, Jerome, Brown and Summer Masikewich controlled the glass.

In the final quarter of game one for Canada, Korea couldn’t get any closer and were completely dominated in multiple areas.

Canada finished with six players in double digits, in fact all with ten points.  They owned the backboard against Korea as they out rebounded them 81-21.  The 22 turnovers by Canada is something they’ll want to clean up in their next game. They have to be more careful with the ball and value possession. Another area Canada has to improve is free throw shooting, going 22/45 (49%) from the charity stripe against Korea. Better second-half shooting from the field helped Canada finish at 46%.

Definitely a good victory for the Canadians who next face a tough France tomorrow morning at 9:45am EST.