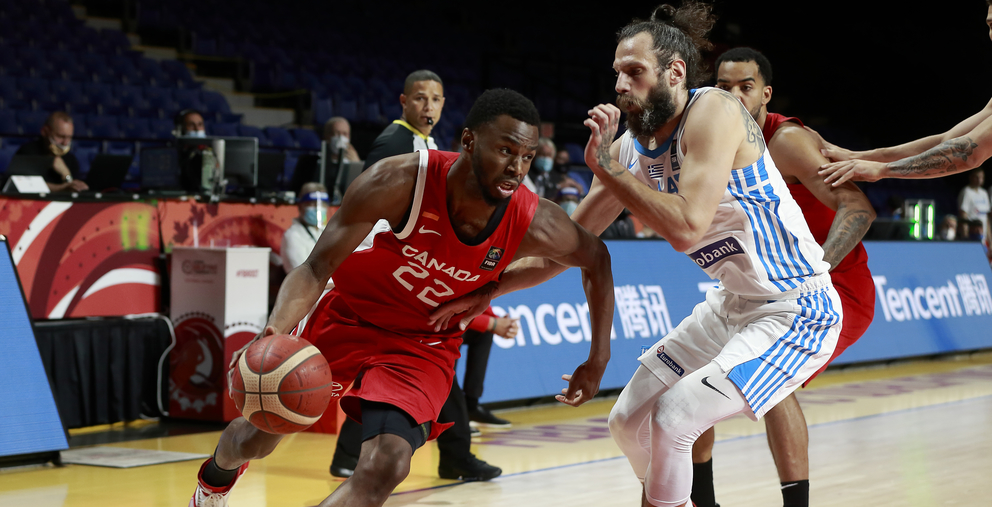 Despite a rocky start – and finish, the Canadian men’s senior national team is another step closer to their goal of qualifying for the Olympics for the first time since 2000 with a 97-91 win over Greece.

Greece, missing several key players for reasons ranging from retirement (Vassilis Spanoulis) to playing in the NBA Eastern Conference Finals (Giannis Antetokounmpo), started the game hot with a steady diet of pick and roll buckets to Georgios Papagiannis and 40 per cent three-point shooting led by guards Kostas Sloukas and Nick Calathes who both had 12 points on the game.

During a rough start to the second quarter, Nickeil Alexander-Walker stepped up to the plate and kept the game from getting out of hand by scoring 14 points in the quarter alone – finishing with 18 on the game. Alexander-Walker was one of the players Nick Nurse singled out during training camp as someone who was impressing him.

“He came into camp with an ultra-aggressive mindset, so he played a lot like that in our scrimmages…I just kept encouraging it,” said Canada’s head coach Nick Nurse. “I told him ‘Listen, you’re going to see a lot of switching and when you get it, do your thing, stay aggressive, we’ll figure out the rest if it doesn’t work.’”

Canada took the lead in the third quarter, fueled by increased aggression on defence and a smaller lineup featuring RJ Barrett, Andrew Wiggins and Luguentz Dort. Barrett and Wiggins took over the reins of the offence and were every bit as advertised as a one-two punch with Wiggins scoring 23 points, grabbing six boards. Barrett chipped in 22 points and five rebounds to go along with it.

“If you give him his left hand, he’s unstoppable, he’s strong, he’s tough…if you let (Wiggins and Barrett) get in the open court, if you let them go downhill off the bounce, you’re going to have a tough night beating them.”

Nurse also praised his team for the ability to get the ball to their two-star players late in the game.

“Part of the learning experience is ‘can we get the ball where it needs to go late?” said Nurse. “There was some pretty good organization there, in getting those shots up and getting the spacing right and getting these two guys involved…Pretty good, especially for a first game. It’s definitely nice having two guys who can score like that.”

Dort made his mark on the game despite a modest showing of three points, three rebounds and two steals by bringing infectious defensive energy off the bench and his defence late in the quarter helped keep the Greek comeback at bay. Pitino said Dort is a player who doesn’t jump off the box score at you, but if you watch the film you’ll say “this guy can play!

“Really good piece to our team, very versatile as well. He can guard lots of positions. He puts in a tremendous competitive spirit which I think transcends to the other players,” said Nurse.

Canada’s head coach said the team didn’t execute some of their schemes well during the first half but chalked up the tough stretches of basketball as a learning experience for the team who have only played themselves and the U19 Canadian team up until this point. Barrett said the team did a good job of figuring things out on the fly and grinding out a win any way they could against a tough Greek team.

“We’ll show the tape tomorrow, we’ve got kind of a ‘we’ve come a long ways but we’ve got a long ways to go’ mentality. We’ve accomplished some things, but we’ve certainly got a lot of areas to polish and correct and I think we’ve got the guys that can do it,” said Nurse.

Next up in the round-robin stage for Canada will be an undermanned Chinese team that’s missing its star Yi Jianlian due to injury as the Canadians look to take full control of their destiny and go undefeated heading into the semi-finals where roughly 700 fans will be allowed into the Save-On-Foods Arena in Victoria, B.C.

CAN vs. GREECE BOXSCORE