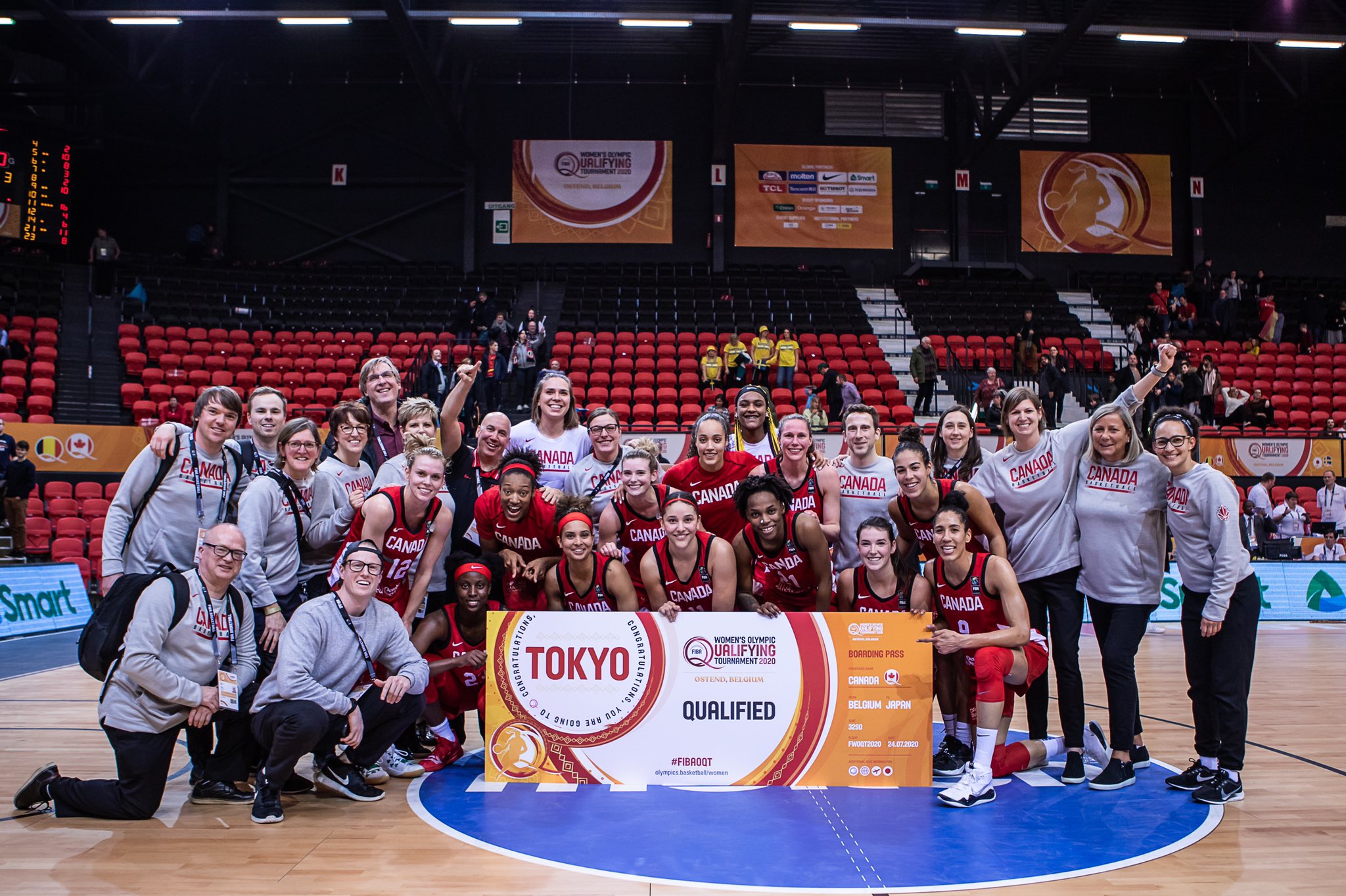 By Drew EbanksFebruary 9, 2020No Comments

OSTEND, BELGIUM (February 8, 2020) – The Canadian Senior Women’s National Team are headed to Tokyo. With an 80-50 victory over Sweden on Saturday, the squad punched their ticket to the Tokyo 2020 Women’s Olympic Basketball Competition.

Natalie Achonwa finished with a game-high 16 points to lead all scorers in a balanced scoring effort from Canada. Achonwa shot 8-for-9 from the floor and added eight rebounds. Shaina Pellington added 11 points while Miranda Ayim and Kia Nurse each scored 10 points. Canada received 43 points from its bench, with Pellington leading the way. Frida Eldebrink led Sweden in the loss with 14 points while Kalis Loyd added 12.

“We’ve experienced the whole gamut of qualification,” head coach Lisa Thomaidis said. “A last minute, grind it out [qualification] in 2012, the last possible berth we eked out. Then onto 2016, where we took care of business in Canada and got it done, now for the first time in our tenure, to do it on foreign soil. I just said to the team, to qualify with a 30-point victory is pretty special. I think it really speaks to how far this team has come. I couldn’t be happier for this team and these players.”

Though Canada won by 30 points, Sweden kept things close throughout the first half. Leading 37-31 at the break, Canada started the second half reenergized and began to pull away. Winning the third quarter 22-10, Canada took a 59-41 lead into the fourth where they continued to roll. After opening the final frame on a 17-3 run, Canada extended the lead to 32 points on a layup from Pellington with 3:52 remaining. Canada finished the game outscoring Sweden 43-19 in the second half.

“It was a slower first half,” Thomaidis said. “A slower start for us. I think it took us a little while to adjust to what Sweden was doing. They did a good job of slowing us down, [but] this team is smart. We made some adjustments. They did it and built a lead and carried on from there. I think we had 12 turnovers at half and finished with 15, so we did a much better job at taking care of the ball and utilizing the weapons that we had.”

Achonwa credited Ayim with the team’s focus to start the third quarter.

“I think the energy we came with in the second half really set us apart,” Achonwa said. “That was our focus. I remember Miranda [Ayim] coming to us in the huddle and saying we needed to win the first three minutes [of the second half] and we did that by getting stops and staying aggressive on offence.”

Canada finished the game shooting 50 percent from the floor while holding Sweden to 33 percent shooting. The Canadians also won the battle of the boards, 45-25, including 14-8 on the offensive glass, and they also held a 16-2 edge in second-chance points as well as a 34-22 edge in points in the paint.

This will be Canada’s third consecutive trip to the Olympic Games. Veterans Achonwa, Ayim and Gaucher will be three-time Olympians with the program.

“How many people can say that?,” Thomaidis said. “Having some expectations of being there tempers a little bit of the excitement right now. When we think back to 2012, we were losing our minds. There’s high expectations on this team and this group so it does temper it, but I can tell you we are a pretty excited group right now. I don’t think it’s quite sunk in yet.”

As Thomaidis spoke about Achonwa and her two teammates becoming three-time Olympians, Achonwa couldn’t help but break into a smile.

“It hasn’t really sunk in yet, but listening to [Lisa] talk about it and it being mine, Kim and Miranda’s third Olympics, kind of makes me emotional,” she said. “Knowing the injuries, the fight, not only that me, but our entire team has been through to get to this point, I don’t think we take it lightly. It’s an honour to represent Canada every time we put a jersey on, but to be able to do it at an Olympic Games and to be able to qualify for another Olympic Games, we definitely do not take it lightly.”

Up next for Canada is a match up against Japan on Sunday, Feb. 9 at 12:05 P.M. ET. This will be their final game in the tournament.

Fans can also catch the action streaming live in Canada on the CBC Gem app and DAZN.  ESPN+ will carry Canada’s games in the United States.

“We came in wanting to win every game in this tournament,” Achonwa said. “And we will keep that mentality going forward.”