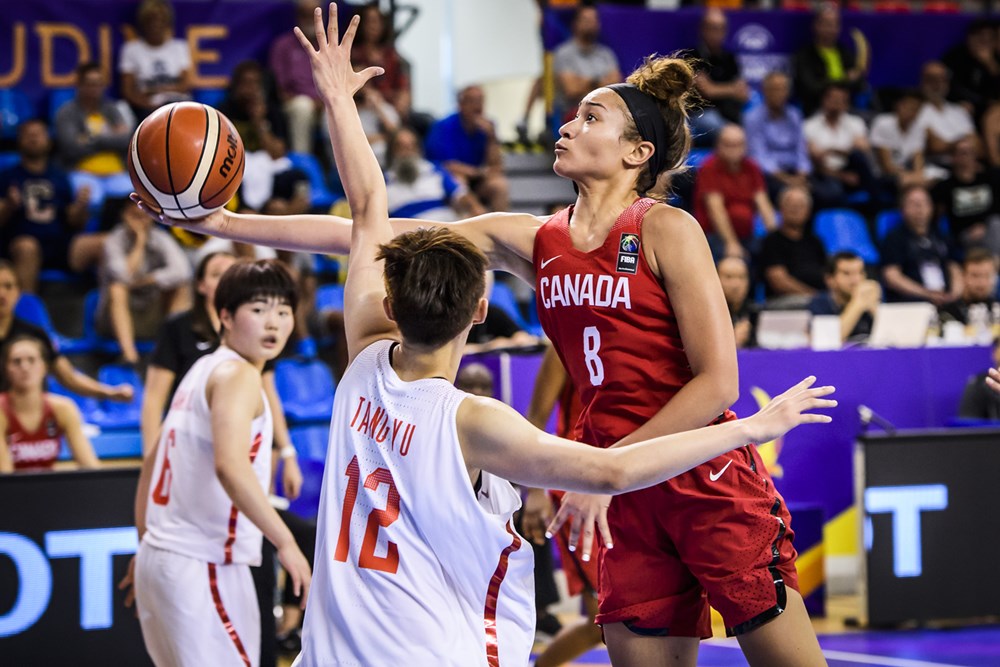 Shaina Pellington, who returned to the lineup after sitting out Team Canada’s game Wednesday vs. Mexico, made her presence felt early in the first as she spun off her defender and pulled up for a jumper to take the lead.  Then on her next possession, Pellington scored quickly forcing China to call a timeout, down 6-2.

After the timeout, China outscored Canada in the first 19-4 behind Jiaqi Wang & Yu Tang who combined 14 points while shooting 67%.

Canada shot a dreadful 28% from the field, with an offense that looked hurried, while playing sloppy with the ball as well with six turnovers.

The Chinese women were longer than Canada making a tougher match-up for their offense. China’s defense was stellar, which led to consistent transition points from errant passes by Canada and long rebounds at times.

Canada’s weakest area in the tournament was free throw shooting (lowest percentage) but they started out well going 4/4 from the charity stripe, finishing on the night 9/12.

Hailey Brown had an incredibly tough match-up as China’s Center 6′ 9″ Xu Han, but despite the height disadvantage Brown controlled the low post on defense making sure China had no easy buckets while doing a great job boxing out the Chinese offensive players.

After a Canada timeout with under six minutes left in the frame, Hall with the shot clock running out passed beautifully to Laeticia Amihere for a big basket.

Amihere once again, showing the world her fabulous footwork, scored again which leas to China calling a timeout, while trying to kill any momentum that Canada may have had.

After the break, both China and Canada played excellent competitive basketball, going back and forth, more aggressive defense, smarter passing and better shots.

China’s Xu Han began to become an issue for the Canadian defense in the low post as she picked up a quick seven points. She finished the night with 19 points, 14 rebounds and 7 blocked shots, all primarily coming in the second half.

Once again, Amihere the youngest in the competition played with such poise and strength. Amihere runs the floor extremely well, case in point in the third where she stole the ball and went coast-to-coast and finished on the left side for a basket.

Aislinn Konig had a quiet game, but came through in the cultch clutch hitting two excellent and well-timed threes to push Canada back into the lead late in the third.

Canada finished the third up 48-45 while shooting better and securing the ball better than they have all tournament with only two giveaways in the second and third.  They finished with a remarkable eight turnovers, while averaging 20 turnovers prior to facing China.

With Pellington’s return, her grit alongside Hanna Hall’s in the backcourt causes such issues for opponents.

Later, Pellington used her tenacity to double on China’s Han in the paint, poking the ball loose from her hands, gathering it while moving up the court with her quickness and slashing through the paint like she has done very well throughout the tournament.

Amihere and Brown dominated the paint for Canada scoring a combined of 20 points added 18 rebounds.

Despite a big three by China’s Wang to cut the lead to 63-60, Amihere responded with a bucket after a Canada timeout. Wang attempted another three but was fouled by Hall, who was in disbelief on the play. Wang buried all three free throws, cutting Canada’s lead to 65-63.

With Canada up 66-63, China missed a wide-open layup with 15 seconds left, as Brown corralled the rebound but China fails to pressure the Canada to try to force a turnover and then proceeds to foul Hall at half court after a very important eight seconds passed on the clock.  Hall hit both to seal the game for Canada.

Canada’s weaknesses were definitely their strengths today against China, shooting a better percentage from the free throw line and limiting their turnovers.

Canada’s domination in the rebounding category was quieted against China as they finished with 42, unlike their average coming into the game, which was 57.

Canada is in tough Saturday vs. Russia for the Women’s FIBA U19 World Cup Semifinals at 12:30pm EST.