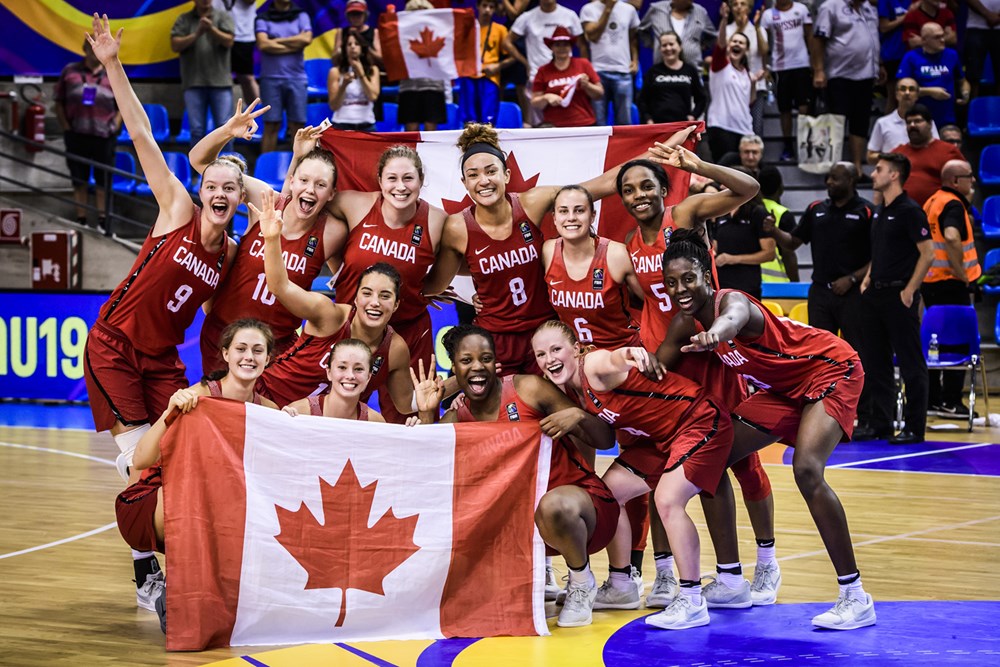 By Mark WilliamsonAugust 1, 2017No Comments

Canada finished an historic run to a medal in the FIBA U19 World Cup with a thrilling 67-60 victory over Japan, claiming Bronze while finishing 6-1 in the tournament.

Canada, looking to set the tone, began the game with yet another slow start, which allowed Japan to get up early.  They contained the Canadians well for the majority of the first quarter defensively.

Enter Laeticia Amihere, who was named a FIBA tournament ‘All-Star Five’ along with two Americans and two Russians and as she had done throughout the week, Amihere entered the game and changed the tempo for the Canadians on both sides of the ball.

Early on Amihere cut through the paint, then hit Alyssa Jerome for a wide-open three to take the lead in the game for the first time.

Canada’s Hanna Hall finished the first hitting a buzzer beating jumper as Canada led 14-10 looking like the team that was non existent vs. Russia.

Canada were hustling to start the second and played with a sense of urgency that gave them multiple second chance opportunities to maintain a consistent six point lead throughout.

Canada’s help defense also excelled against Japan, which allowed them to seize control of the game.

With Japan right on the heels of the Canadians as they cut the lead to one, the Canadians pushed the lead back up as they ended the half on another buzzer beater, this time by Jerome off the backboard. Canada took a 33-27 lead at halftime.

After the break, Canada’s lead just wouldn’t be more than six points, as both teams were trying to win the Bronze medal.

Japan went on an 8-0 run to regain the lead, which they maintained throughout the third quarter but Canada’s Aislinn Konig’s three-pointer cut the Japan lead to 39-38.

With a late surge in the third, Hall’s three gave the lead to Canada, 45-43. With the clock running out, Canada had the ball and they got another buzzer beater, this time by Kendra Van Leeuwen, as the Canadian bench went crazy.  Canada held on to a slim 50-45 lead after three.

Japan jumped out with two quick buckets early in the fourth, but as Canada shot a lot better in the game, allowing them to maintain their lead in the fourth.

Canada was able to hold on and capture the Bronze medal, their first ever in the competition, behind another double-double performance (13pts, 10rebs) by Laeticia Amihere.