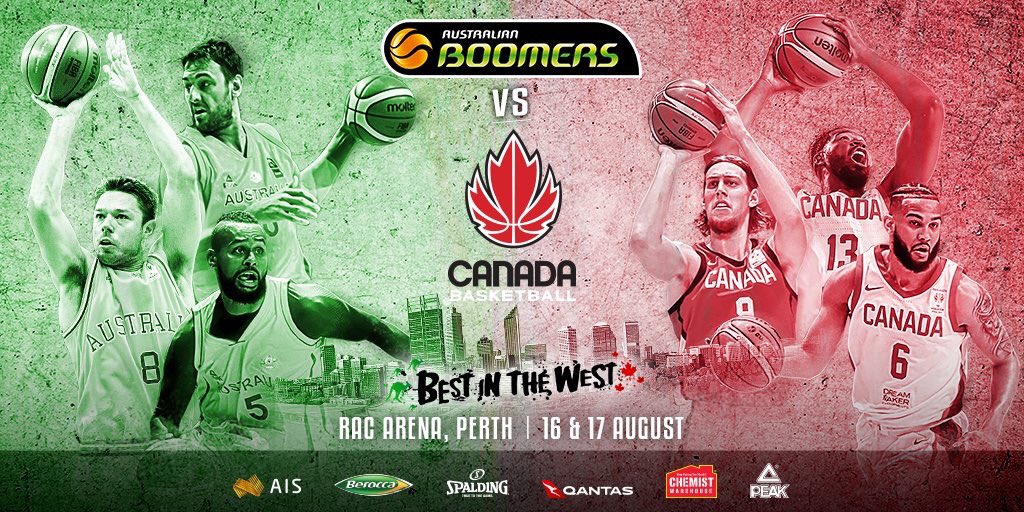 Canada to face Australia in Perth August 16 and 17

PERTH, AUSTRALIA (April 2, 2019) – Canada Basketball will take on the Australian Boomers at Perth’s RAC Arena on Friday, August 16 and Saturday, August 17, with both teams set to feature some of the biggest names in the sport.

These two games will serve as important preparation ahead of the FIBA Basketball World Cup 2019 to be contested in China from August 31 – September 15, where coincidently both teams have been drawn in Group H for this tournament.

Presale tickets will be available via Telstra Thanks® from 11:00am (local), Friday 5 April and the general public on sale commences from 9:00am (local), Thursday 11 April from Ticketek (www.ticketek.com.au)

These highly anticipated games will be the first time the Boomers have played in Perth since the 2014 Sino-Australia Challenge, with both games set to be played in front of a record crowd for a basketball game in Perth.

Rowan Barrett, Canada Basketball General Manager, Men’s High Performance said: “Facing Australia at home will be a difficult test for our team but an important one as we continue our preparations for the FIBA Basketball World Cup 2019.  Ranked eleventh in the world and coming off a first-place finish in Group F in the Asian Qualifiers, the Boomers will be a good challenge, especially given the raucous pro-Australian crowds that await us in Perth.”

Fans in Perth will see the final 12-man teams that will represent both countries in China and for the Boomers, these will be the first warm-up games of their pre-World Cup campaign.

Basketball Australia Chairman, Ned Coten said: “This announcement is another landmark moment for Basketball Australia in such a special time for the sport. We are thrilled to bring the Boomers back to Perth for the first time since 2014. The Perth basketball community and fans at large in Western Australia are some of the most dedicated supporters in the country and we have no doubt that the RAC Arena will be sold out for both games in August.”

Basketball in Australia is enjoying unprecedent popularity, which is evident by the huge demand for tickets to the Boomers two games against USA Basketball at Marvel Stadium in Melbourne on 22 August and 24 August, where over 90,000 tickets have been sold.

The CEO of TEG Geoff Jones said: “We are both proud and delighted to be partnering with Basketball Australia to bring international basketball to Perth.

“Australian basketball, whether domestically or on a global stage, has never been stronger and we know the Western Australian sports fans and event goers will come out in record numbers to support these special games at RAC Arena.”

Australian Boomers Head Coach Andrej Lemanis said: “I’m excited that the Boomers get to return to Perth, it’s such a wonderful basketball community. We see them get behind the Wildcats year in and year out and the city has a great basketball culture so I’m looking forward to getting into the RAC Arena again. It’s been a long time since we’ve been able to play warm-up games on home soil against quality opposition. It’s great reward for the Australian fans and we know there will be a lot of excitement surrounding the games, but as a team, we need to focus and utilise these games to learn about ourselves before the World Cup begins.”

The last time the two teams met was during the gold medal match of the 2018 Gold Coast Commonwealth Games and Canada are relishing the opportunity to return to Australian shores as they prepare for their own tilt at FIBA Basketball World Cup glory.