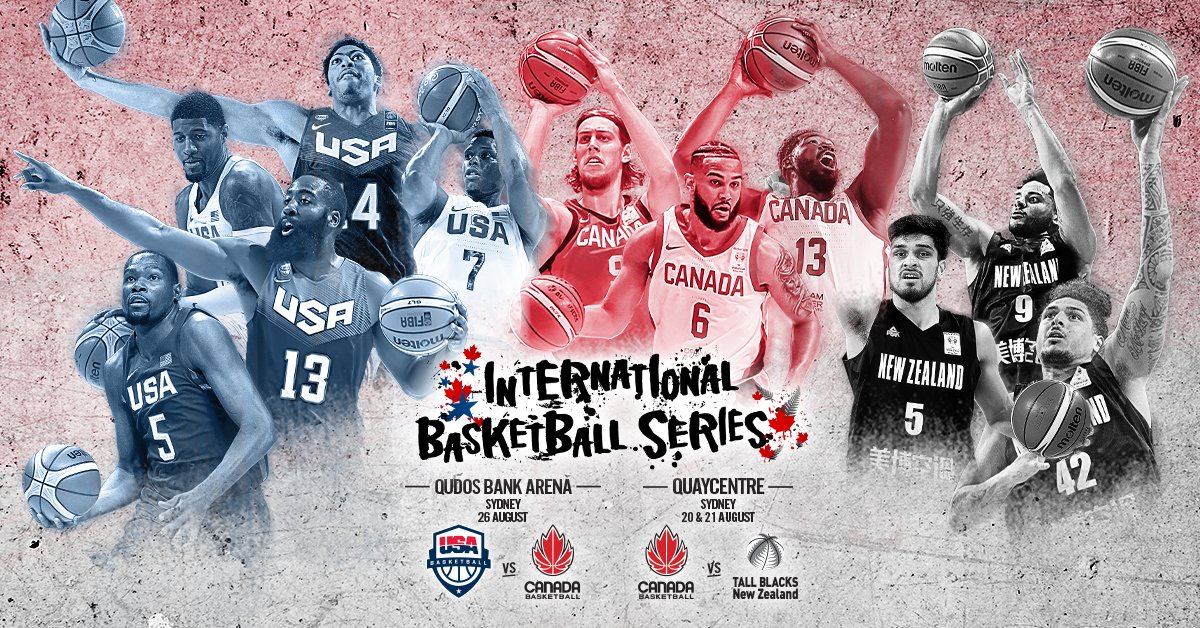 These games will serve as important preparation for all teams ahead of the 2019 FIBA Basketball World Cup to be contested in China August 31 – September 15, with each outfit to feature their final 12-man roster for the world championship.

USA Basketball’s encounter against Canada at Qudos Bank Arena will follow two massive games against the Australian Boomers at Marvel Stadium in Melbourne on 22 and 24 August in front of over 100,000 fans – through the support of the Victorian Government via its tourism and major events agency Visit Victoria– and will round out their preparation for China.

“This game will not just be an opportunity to put the finishing touches on our pre-World Cup preparations, but it will be amazing for USA Basketball to return to Qudos Bank Arena where the USA men and women won Olympic gold medals in 2000. I have no doubt the game and atmosphere around the game will again be very memorable.”

With the addition of these three games, Canada Basketball will play a total of five pre-World Cup games in Australia, having previously confirmed two fixtures against the Boomers in Perth on 16 and 17 August.

Canada Basketball General Manager, Men’s High Performance Rowan Barrett said: “We’re excited to have the opportunity to compete and gain familiarity against some of the top teams in the world in preparation for the FIBA Basketball World Cup 2019.

“The USA has been the gold standard in FIBA basketball for several years so this will be a great opportunity for our program. In addition, having the chance to play tough road games against Australia and New Zealand will be a valuable experience for our team on the road to the World Cup.”

New Zealand is one of only five nations – joining USA, Serbia, Argentina and Spain – to have made it out of pool play in each of the past four FIBA Basketball World Cups.

The Tall Blacks last met Canada during a classic semi final encounter at the 2018 Commonwealth Games on the Gold Coast where the later won on the buzzer, setting up two compelling affairs when they meet again in August.

Basketball New Zealand CEO Iain Potter said: “These games are an amazing opportunity for the Tall Blacks, but also for Basketball New Zealand to forge new and ongoing relationships. It speaks to our reputation on the international stage that we have secured such an invite to play alongside some of the world’s best teams and I know Pauli (head coach Paul Henare) sees the games against Canada as a great measuring stick for where the team will be at leading into the World Cup.

“This is also a great incentive for our players, a chance for them to show what they can do against NBA level opposition, as a team but also in their own careers – who knows what might come of such an opportunity.”

Not since the 2000 Sydney Olympics has Australia seen such high-quality men’s international basketball on these shores, with seven star-studded games to be played inside 11 days.

TEG CEO Geoff Jones said: “As the country’s pre-eminent promoter of international sport, TEG Live is delighted to be bringing the biggest stars in basketball to Australia this August.

“With this year’s FIBA Basketball World Cup to be played in the region, it lends itself perfecting to having leading teams prepare for the world championships here in Australia and giving fans the opportunity to see the best in the flesh.”