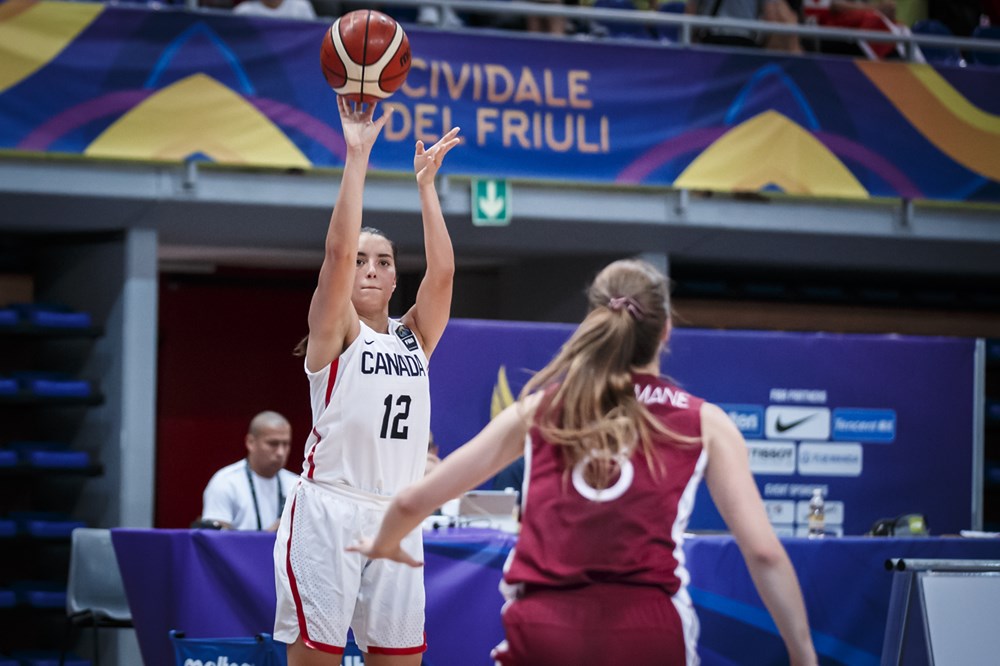 Canada’s FIBA U19 World Cup team edges Latvia, improving to 3-0. Next up Mexico

By Mark WilliamsonJuly 25, 2017No Comments

Aislinn Konig shot the lights out with 10 threes, Leads Canada to 74-70 win

Canada held on for a 74-70 win over Latvia as Langley B.C.’s Aislinn Konig buried an incredible 10 threes to move the team to 3-0 in group play and setting up a round of 16 game with Mexico.

Latvia came out the gate with such force, striking first while going 4-for-5 from beyond the arc in the opening quarter, which was shocking since they were the worst three-point shooting team in the tournament after two games.

Once again, Canada started out slow in the first quarter. Once down 11-3, they picked up the momentum nearing the end of the frame as Konig and her back-to-back three pointers, tied it at 14.

Latvia’s Dinija Pavelsone scored a quick five points to end the first regaining the lead for her country. Latvia shot 54% from the field to Canada’s 37%, as they led 21-19 after one quarter.

Much of the same play continued by the Latvian women in the second quarter, playing much more aggressive than Canada. They shot extremely well early, but their shots began to miss the target as the quarter went on.

Canada kept the game close as their second chance opportunities increased but couldn’t capitalize due to crucial missed shots. In the first 6 minutes of the quarter, both teams combined for nine points, with neither pulling away.

A couple of turnovers by Canada, gave Latvia some fast break points, slowly increasing the lead. Latvia went up 31-24.

Konig, continued her great play from behind the arc, hitting another three to cut the deficit and a huge block by Jerome in the paint to end the half, kept Canada close but down 33-29 going into the break.

Latvia’s game plan seemed to have been to shoot a better percentage on their threes and shut down Hailey Brown. Brown was held scoreless in the first half, going 0-for-5 from the field.

But after the break, Brown made her mark, causing all types of problems for Latvia on the glass. She was gathering anything and everything in her vicinity and got on the board early in the third with a put back lay up.

The third quarter was literally a game of runs by each team, Latvia went on an 8-0 run after Canada tied it at 33.

Canada used superb ball movement and swarming full-court defence to spark their own 15-0 run, led by Amihere’s defensive presence and back to back three-point plays. In Canada’s previious two games Amihere has come off the bench and given her team a much-needed boost at crucial points and right on script, allowed Canada to climb back and push ahead in this game as well.

Latvia ended the Canadians run by going on their own to tie it up at 48, led by their leading scorer Pavelsone, who finished the day with 19 points.

Nearing the end of the third, Canada finished on a 7-0 run to lead 55-48 after three, as Konig once again was finding her rhythm from beyond the three-point line hitting her sixth three pointers during that stretch.

But Latvia kept up their fight, going on a 9-0 run while regaining the lead once again early in the fourth.

Konig, who was absolutely on fire today for Canada, hit her ninth three of the game to help her team take the lead at 69-67. Pavelsone came right back with her own to regain the lead for Latvia, 70-69.

After both teams took timeouts, Shaina Pellington hit one of two free throws to knot the game up at 70 apiece.

Once again it was Konig to the rescue and with a defender all over her, hit a deep three with 34 seconds left that sealed the game for Canada. Konig finished the day shooting 10-of-15 from the three-point line for a game-high 32 points.

Canada’s aggressiveness on offence, leading to some careless giveaways of the basketball, has them averaging 21 turnovers a game. They have to do a better job taking care of possession. Poor free-throw shooting, which sits at 47% needs to also improve in this tournament for Canada.