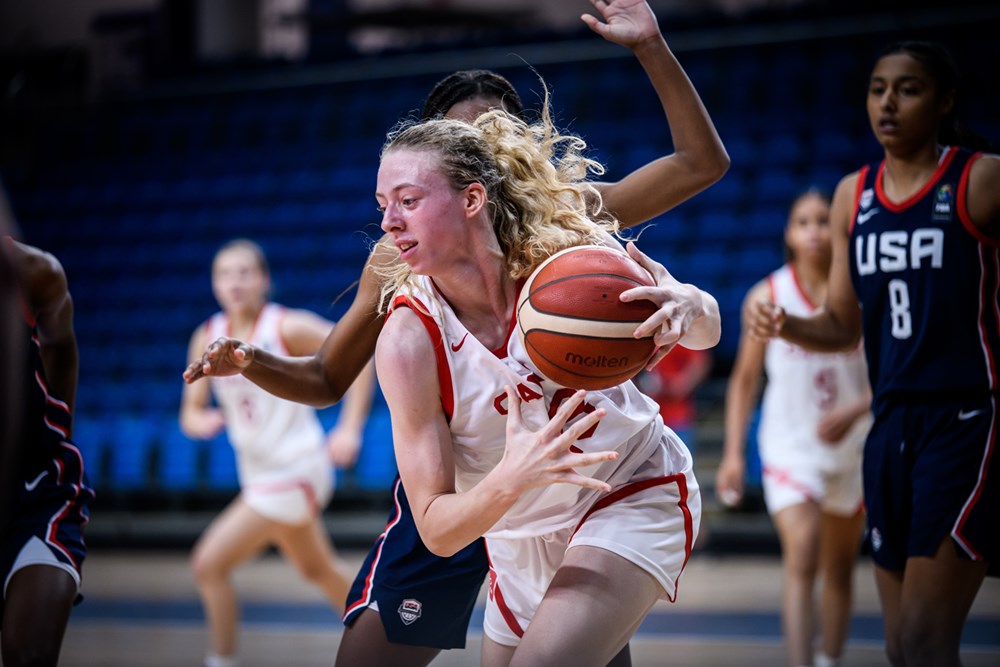 Home » On Point Blog » Canada’s gold medal hopes dashed as USA wins 87-57 at the FIBA U17 Women’s Word Cup, will play for Bronze

The classic matchup of Canada vs. America wrote another chapter at the FIBA U17 Women’s Basketball with the Americans taking an 87-57 win in the semifinals.

America started strong with tournament stand out Juju Watkins setting the tone on the way to a 27-9 opening period for the Americans. Their skill and depth neutralized the defensive advantage Canada has held throughout the tournament and the U.S.A. turned the ball over only 12 times – the fewest of any team Canada has faced this tournament by far.

While America took care of the ball on one end, Canada struggled to keep control over it on offence turning the ball over 29 times, leading to 31 points off of turnovers, and giving up 56 points in the paint as a result.

Despite the dominant performance from America, Cassandre Prosper showed up in a signature game for her in the tournament and finished two blocks shy of a triple double. She had 11 point, 10 rebounds, eight blocks and two steals. Her running mate in the front court, Toby Lee Fournier had 10 points, seven rebounds and two blocks.

Mackenly Randolph led all scorers for America with 14 points, Watkins had 13 points, nine rebounds and two steals, and Jaydn Donovan, Jaloni Cambridge and Morgon Cheli each had 10 points for U.S.A.

Canada will now play for third place in a matchup against France, who had been unbeaten until their 66-59 loss to Spain in the semi-finals. France’s Dominique Malonga is the second leading scorer in the tournament and France has been the second-best offence in the tournament behind the high-powered USA line up.

The final games will take place Sunday, with the Canada vs. Spain match up set to tip off at 2 p.m. est. on FIBA’s YouTube channel.

Semifinals: Canada vs. USA livestream below: