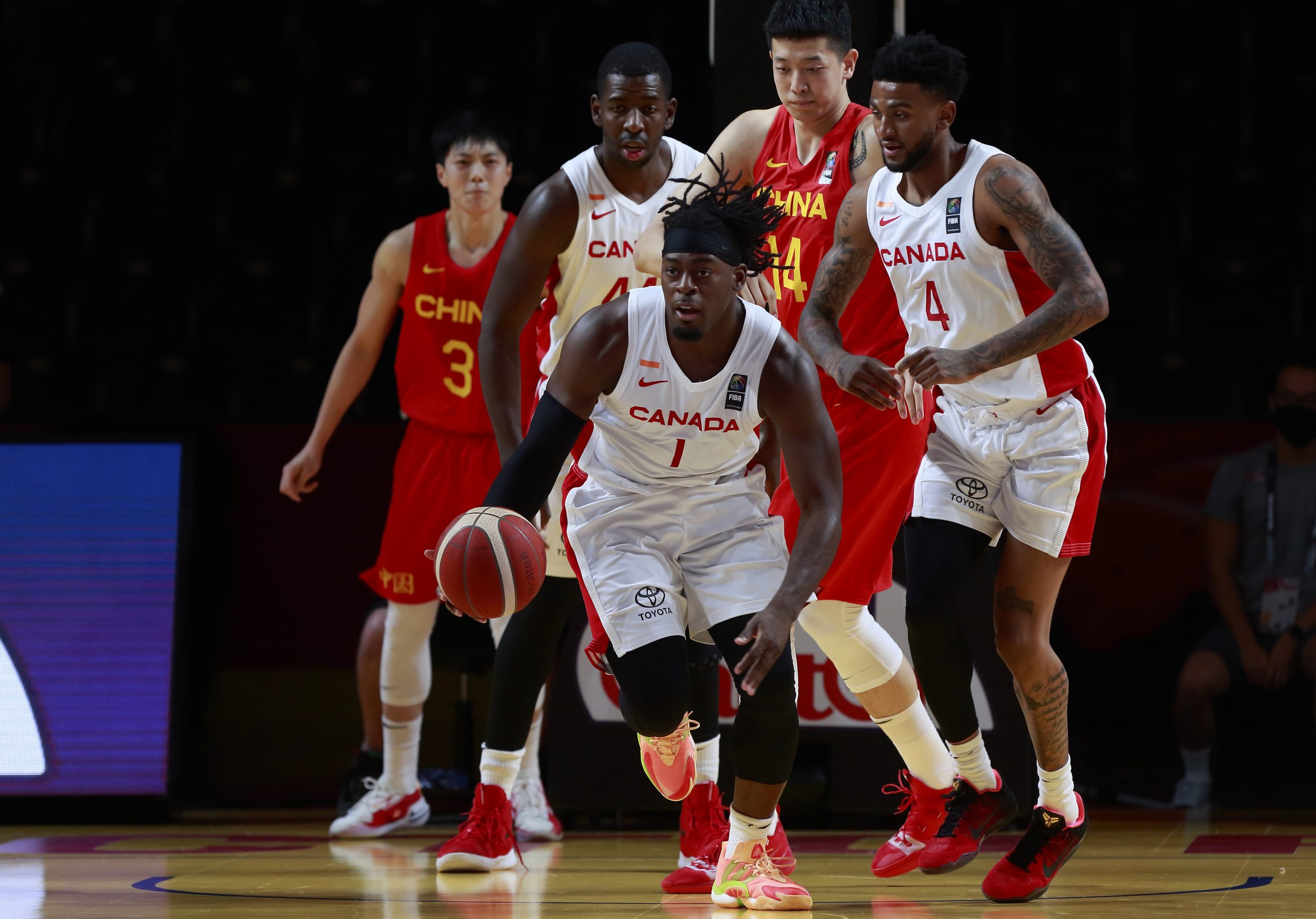 By Shaun McLeodJuly 1, 2021No Comments

With a 109-79 victory over China, the Canadian senior men’s national team has earned themselves two days of rest as they wait to find out who they’ll face in the FIBA Olympic Qualifier semi-finals on Saturday.

It looked like China may find a way to hang with Canada early as they found centre Qi Zhou in the post but when Luguentz Dort checked into the game Canada turned up the defensive pressure and began to dominate the transition game scoring 20 points off turnovers, 18 fast break points and scoring 30-second chance points while holding China to just 5.

“It was a hard-fought game, from both sides,” said Andrew Wiggins. “We’re still learning to play together, it’s a new squad but every game we’re getting better. Every moment we’re on the court together, the chemistry is building, we’re getting more comfortable and hopefully we can keep it going.”

Outside of Aaron Doornekamp, every Canadian player that checked into the game got in on the action. Andrew Nicholson, who plays for the Fujian Sturgeons in China had 14 points and seven rebounds, Dwight Powell had 12 points and eight rebounds. Dort, Nickeil Alexander-Walker and Trey Lyles all had 11 points as well.

While Canada’s defence, led by Dort off the bench continued to impress in spurts, head coach Nick Nurse says the team needs to shore up the communication late in the shot clock to deal with the longer possessions that come with the FIBA game.

“A lot of times we’re good talking early in the possessions but being able to talk all the way through it is the key so we can finish off the possessions,” said Nurse. “They’re sure trying to execute the schemes, they sure are trying to communicate and when there’s something wrong they try to cover up for each other and try to help each other out so that’s a pretty good combination, those three things.”

For the second straight game the Canadian’s saw a variety of looks on defence, something Nurse says is valuable to his team as it looks to reach the Olympics for the first time in over 20 years.

“In the two games, we have seen quite a bit, we saw a bit of zone switching back to man yesterday, obviously full court man-to-man you see a lot in FIBA, we saw a three quarter court press, we saw a 1-3-1 zone today, a 2-3, multiple pick and roll coverages as well,” said Nurse. “It’s hard to simulate some of these things in practice, you do the best you can but there’s nothing like doing it live and then being able to teach and learn from there.”

Nurse staggered his star duo throughout the game, looking to keep one of Wiggins or Barrett on the court at all times until the fourth quarter and slotted them in at the two, three and four while tinkering with the lineup and the offensive freedom it allowed saw the Canadians rack up 30 assists in a performance that many were hoping would come from this group of players when the roster was announced.

“When you play together, the game comes easy,” said Wiggins. “We have a lot of unselfish guys, we all want to see each other win, do good, and out there we just try to play aggressive, play to win, play the right way.

CAN VS. CHINA BOXSCORE