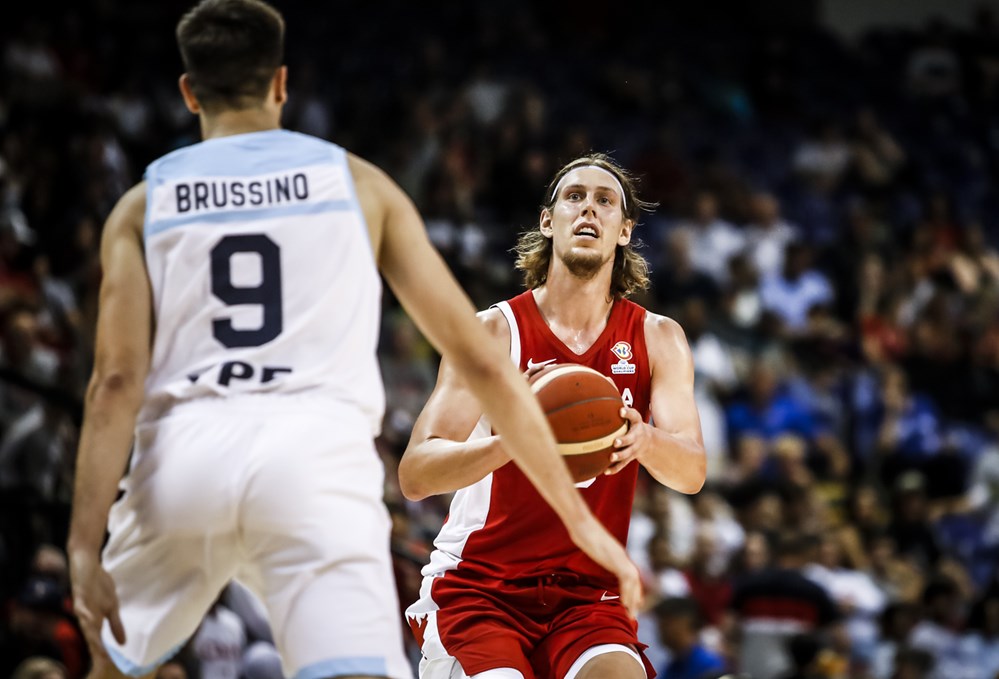 By Shaun McLeodAugust 26, 2022No Comments

The Canadian Senior Men’s National Team remains undefeated in FIBA World Cup Qualifying with a 99-87 over their biggest test yet, Argentina.

Nickeil Alexander-Walker started the game by dictating the Canadian offence and finding an early lead over the Argentinians, whose three-point shooting kept them within striking distance. Alexander-Walker, who had eight points on the night, quickly picked up two fouls and saw his minutes limited throughout the rest of the game.

Dwight Powell had a physical encounter with Marcos Delia in the post that sent him to the floor. Powell was able to compose himself, but it signaled a change in the pace of play as Argentina began to play with more contact, but Canada would thrive, going deeper into the bench and taking a 28-21 lead after one.

Carlos Delfino helped bring Argentina within five, but Canada continued to frustrate Argentina, drawing an offensive foul from Delia and a technical foul out of Argentina’s head coach Nestor Garcia. The older Argentinian squad began to slow down throughout the quarter as they struggled to keep pace with the young, athletic Canadian team, leading to a 52-39 lead for Canada at the half.

While Argentina struggled as a team, Nicolás Laprovittola ran wild with Alexander-Walker out of the game, putting up a game-high 30 points and three rebounds, continuously giving Canada fits, taking a game-high 14 free throws, and shooting 80 per cent from three on five shots. Argentina also had solid contributions from former Denver Nuggets player Facundo Campazzo, who had 17 points, and Gabriel Deck, who had 16 points.

Canada began to showcase their three-point shooting in the third quarter behind 23 points, eight assists, four rebounds, and two blocks from Shai Gilgeous-Alexander. Kelly Olynyk wasn’t far behind with 21 points and seven rebounds.

The game is a measure of revenge for Canada, who notably lost their chance to make the Olympics on a last-second buzzer-beater from Thomas Satoransky in their appearance in Victoria.

As Canada turns their attention to the matchup with Panama (8pm est.) on Monday, Sportnet’s Michael Grange has reported that Gilgeous-Alexander is set to be shut down for the next game, and Alexander-Walker is also set to miss the game as his wisdom teeth are being removed.

Canada is the best shooting team in FIBA Americas qualifying, The USA is second.

Luguentz Dort attended the game but did not suit up for Canada.