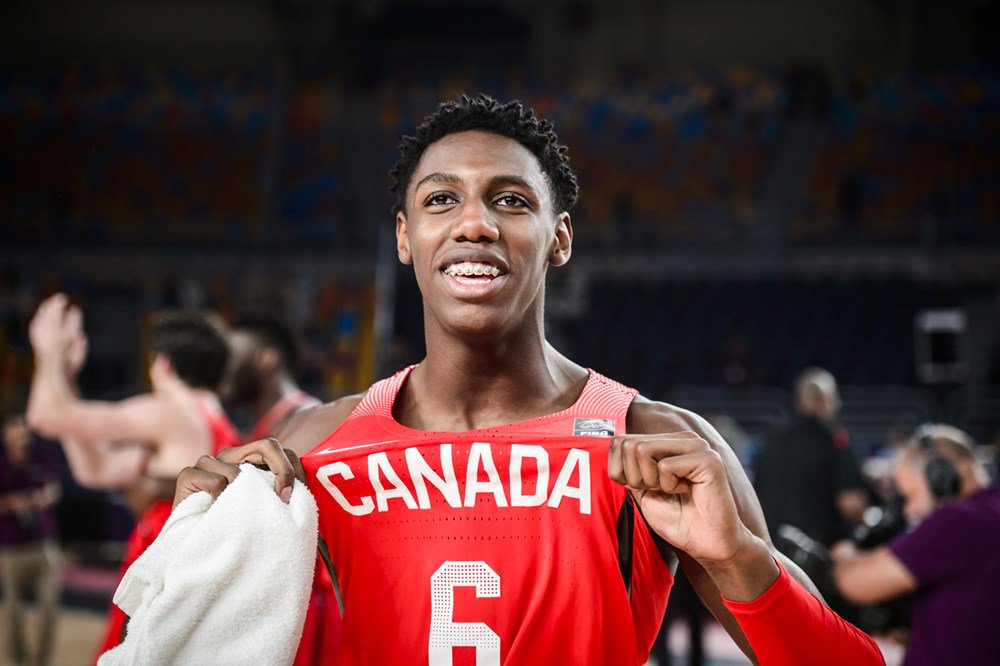 Canada’s U19 squad pull of Historic Upset of the U.S.A. at World Cup in Egypt

By Mark WilliamsonJuly 8, 2017No Comments

Home » On Point Blog » Canada’s U19 squad pull of Historic Upset of the U.S.A. at World Cup in Egypt

USA was a 20.5 point favourite entering this game and they had beat Germany by 22, so was Canada, a nation on the rise in basketball that much of an underdog? Most thought Canada could possibly compete; they had to, as Canadians have been growing increasingly tired of playing second fiddle to the United States.

For Canada, they were once again without Iowa State bound starting point guard Lindell Wigginton, so Jordan Henry started in his place for the second straight game.

With what started out to be a slow 2 minutes to begin the game, Canada and the United States exchanged missed field goals early on. After an American made free throw, Amidou Bamba scored on a floater to open the scoring for the Canadians.

The USA tried to pull away; leading 6-2 early, then Barrett Jr. took matters into his own hands with a pull up jumper, followed by a three.

The Americans slowly increased the gap between them and Canada nearing the end of the first, mainly due to their rebounding and inside presence by Austin Wiley and P.J. Washington. The second chance opportunities from the size and strength of the U.S. bigs was hurting Canada. The USA led 23-17 after one.

With the Americans increasing their lead behind Payton Pritchard’s three, and much of the same from Wiley and Brandon McCoy in the paint, Canada scored a quick four points, which led to a timeout by USA’s head coach John Calipari.

Canada playing in a 2-3 matchup zone to avoid any more issues in the paint, began to chip away at the U.S. lead as leading scorer Barrett Jr., who unfortunately missed early on while attacking the rim, didn’t let that phase him as he went toe to toe with Washington in the paint. He did his damage from the three-point line as well as underneath the basket. In one sequence Barrett Jr. drew the foul and completed the 3-point play to tie it up at 31. He drew and-1 opportunities throughout the game, much to the chagrin of the USA.

Grant Shephard, playing a lot more assertive for Canada in the past two games, again brought tons of hustle, getting crucial boards and scoring on putting back lay ups. The urgency behind the Canadians in rebounding elevated in the second quarter, as they led the FIBA U19 tournament in defensive rebounding and it was in their best interest to make sure they continued to do so.

In the next sequence, the USA’s Peyton Pritchard hit back to back threes, followed by Nate Darling of Canada hitting one of his own, putting Canada back in front and was pretty much the tale of this semifinal matchup for the first 20 minutes.

Nearing the end of the first half and with the game tied at 42, Barrett Jr. took the final shot, missed, but was fouled. He buried all three free throws and finished the day 12-of-15 from the charity stripe. Canada led 45-42 over the Americans at half, behind Barrett’s stellar 25 points on 7/16 shooting and 8 rebounds.

Canada was trying to overcome the notion that it is weaker mentally or not possessing the grit to compete harder with the always-strong USA. That mentality was changing quickly as this game progressed as the Canadians’ confidence grew with every minute ticked off the clock.

The Americans came out in the third in a full court man defense, playing tighter while trying to frazzle the Canadian ball handlers.

Barrett Jr. guarded by Hamidou Diallo, who opted to return to the University of Kentucky instead of remaining in the 2017 NBA Draft, was not having his best game offensively and finished 2-for-11 from the field with 8 points.

Canada went up 51-44 in the third behind Barrett’s quick bucket to start and Abu Kigab’s 4-point play. Canada then went on a dry spell on offence, as gaps in the paint closed quickly and they weren’t finding open spots for good looks like earlier. Their field goal percentage lowered to 33%.

The USA finally regained the lead behind Immanuel Quickley’s three free throws on what looked like a bad call against Prince Oduro.

From that moment, Canada went on a 7-0 run and finished the frame outscoring USA 14-6 with some great passing by Darling and scoring by Barrett Jr. and Kigab.

Canada held USA to 17 points in the third quarter as they led 66-59 with ten minutes to go in the contest. The pride in their defense stepped up considerably and it seemed to many that they wanted it more than the Americans.

The USA came out in the fourth frame with a sense of urgency as Carsen Edwards hit a three. Kigab responded right away with 3-point play but the Americans were fighting until the end as Pritchard hits his fourth three of the contest for the US.

Noah Kirkwood of Canada then went coast to coast for an easy uncontested lay up for two of his six points. With Barrett Jr. in foul trouble and taking some rest, Danilo Djuricic, who had a quiet first half, hit a corner three to push the Canadians lead to 79-72.

Barrett Jr. returned to the action and fought his way through for a tip in while being fouled and completed the 3-point play, having amassed 36 points at that point.

The recently turned 17 year old clearly demonstrated that he was the best on the floor today, making plays, scoring in multiple ways and despite being the youngest on the team and potentially in the tournament, he played like he definitely wanted the opportunity to play for gold.

The USA was in desperation mode, fouling to try to get the ball back and score, but time wasn’t on their side. With Barrett Jr. fouled out and Abu Kigab going down with what appeared to be a calf injury or cramps, Canada showed poise by hitting their free throws down the stretch, utilizing the clock and holding on to their lead.

The game was already sewed up for Canada, up 97-87 and with possession, as Nate Darling lofted it up for an alley-oop to Grant Shephard with little to no time left, as the whole team rejoiced in their incredible upset victory over the powerhouse Americans. Canada won it 99-87 over the United States, sending shockwaves throughout the basketball world.

Canada committed only 14 turnovers in the game, which was their best as far as limiting giveaways. This in fact, was their best performance of the tournament all around.

If Canada can put together another solid performance Sunday vs. Italy in the gold medal game they should be looking at hanging the gold medals around their necks. There is still not indication of the health of Lindell Wigginton, or if he’ll be able to suit up. Canada can sure use him.