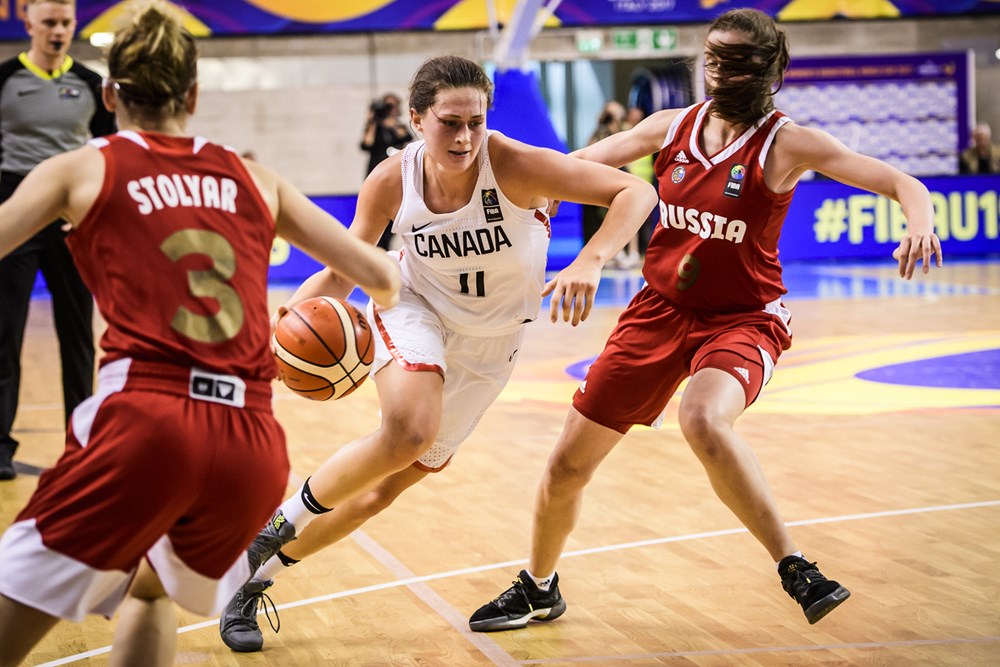 Canada’s U19 Women come up short vs. Russia, Face Japan for Bronze

By Mark WilliamsonJuly 30, 2017No Comments

Home » On Point Blog » Canada’s U19 Women come up short vs. Russia, Face Japan for Bronze

It was certainly not the game Canada was hoping for in the 2017 Women’s FIBA U19 World Championship Semi-Finals, going down 65-41 to a strong Russian team.

What appeared as two evenly matched countries wasn’t the case after the first quarter. Down 8-0 in the opening two minutes, Alyssa Jerome hit Canada’s only three of the game. Hailey Brown followed with a mid-range jumper cutting the deficit to 8-5.

That was as close as Canada would get for the rest of the game.  The Russians were getting far too many open looks at the basket and easy buckets.

Any time the Canadians would tack on a bucket, Russia came down and hit a three. Then Canada would miss a shot, Russia with another three.

Down 29-12, Canada called timeout, but they couldn’t seem to get anything going on offence as the Russia lead increased in the fist half and Canada finished down 43-17 at the break.

Facing a dreadful daunting 26-point deficit at halftime, Canada hadn’t seen this big of a deficit in the tournament and definitely couldn’t get out of it by the end.

A poor shooting performance by Canada’s starters, who shot a combined 7/40 from the field (17.5%) as well as being out-matched in the rebounding department (58-42) didn’t help their cause as Russia dominated all game.

Prior to the semi-finals, Russia’s Captain Raisa Musina averaged 12.4 points and 12.4 rebounds, Maria Vadeeva averaged 18 points and 13.8 rebounds per game and both were going to pose serious problems for Canada

Sure enough, they both combined for 35 points and 27 rebounds in the game.

The only bright spot for Canada came in the fourth, where they finished on a 15-2 run in the final five minutes to make the gap in the score more respectable.

The Canadian women will have to move past this loss to Russia as tough as it was and hope for Bronze. An amazing run has impressed many with how the Canadian women have played in this tournament. A few areas to improve but nonetheless, they should hold their heads and spirits high.

Canada will face Japan in the Bronze Medal game on Sunday, July 30, 2017 at 12:30pm EST. Japan is going to be a tough opponent as they lead Canada in almost every statistical category. They lost a relatively close one, 73-66, to the United States Saturday in the other semi-final.