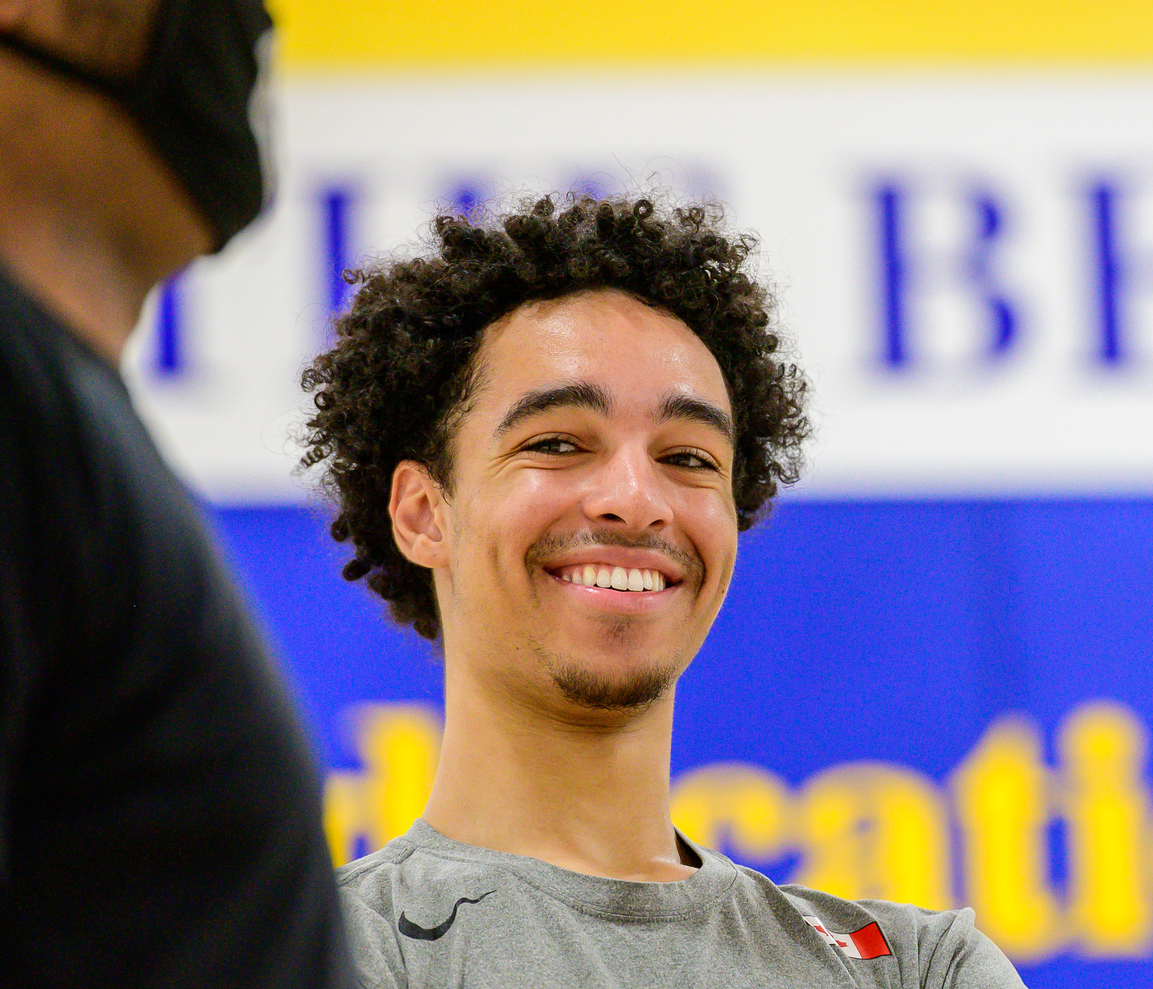 By Kyle OliveiraMarch 14, 2021No Comments

(Spokane, WA) Over the past two decades, coach Mark Few has helped turn Gonzaga into a national powerhouse, and this season, the Bulldogs are taking an undefeated record into the tournament, with what is possibly their best roster ever. Gonzaga has had a few notable additions this season, and one of the biggest was the arrival of Canadian junior Andrew Nembhard from Florida. Nembhard has had a great season considering the decline in minutes since his former school, and won the WCC 6th Man of the Year award for his consistent season-long efforts. Admittedly there’s still important basketball to be played, but as of this point, Gonzaga looks to be the perfect fit for the Canadian prospect.

Nembhard (Aurora, ON) has always been a special basketball player. He was ranked as a top-25 prospect before committing to Florida, and had two outstanding years there. Before all of that though, he was at the Monteverde Academy and played his club basketball for UPlay Canada. Nembhard was a standout talent back in those days as well, and UPlay CEO and Founder Dwayne Washington was there to work on his game from very early on.

“We tried to work on having him play off the ball more”, said Washington, speaking on his coaching focus with Andrew. “With his size we wanted him to be able to move over and switch. We worked on his shooting consistency, especially long-range, and you can see how well he’s done with that. In addition to that, just being a bit more aggressive offensively while still looking to set up teammates, which is the hardest thing to do in sports.”

That training focus clearly paid off, as when you evaluate Nembhard’s current offensive game, he’s as confident and efficient as he’s ever been, serving as a facilitator as well as a guy who’s able to get his own shot seemingly at will.

“He can make plays for others, but he’s also improved his game to the point where he can really score now”, said Washington. “A lot of guys can only score, but Andrew plays more of a steady, less volatile game because he can produce regardless.”

That all-around game is something that has always been in his arsenal, but the move to Gonzaga allowed for it to grow naturally. In his first two seasons at Florida, Nembhard started every single game, and was one of the faces of the program. The transfer to Gonzaga has meant less playing time coming off of the bench, but he’s still started in 10 games and averages north of 28 minutes a night. Andrew is the defacto 6 man, and plays just as big of a role as the starters. His shooting percentages are up across the board, and he’s only experienced a slight dip in numbers despite his decrease in playing time. Nembhard has always been an efficient player, but as UPlay’s Dwayne Washington mentions, your teammates have a large impact on those statistics.

“Andrew’s always had confidence, but this year his team is firing at all cylinders”, said Washington.  He’s playing with veteran guys, and he plays his best when he’s with other guys who are at his level of IQ.”

Nembhard’s IQ is something that’s important to mention, especially for a young guard. Andrew’s game is mature beyond his years, he has a poised control of an offence, and as the lights begin to get brighter in late March, those are the kind of players you need to survive and advance.

“For Andrew, he’s going to be extremely important”, adds Washington. “He’s going to get to his spots but he’s also going to facilitate. With his experience as well, being in the tournament already and hitting clutch shots, he’s just as important as anyone, but you could say even more important than most due to his versatility. After all, we know how the tournament goes, it’s a guard’s game at the end when it’s close.”

The tournament certainly does fall upon the guards late, and you can bet that Nembhard will be on the court for most of the biggest moments in this championship run.

Gonzaga is a team that often receives undue flack for their easy conference schedule, but they’ve gotten important Q1 wins this season against West Virginia, Iowa and Virginia, and have looked different than any other Gonzaga team of the past. The Bulldogs have gotten to the Sweet 16 in the last five NCAA Tournaments, made the championship game in 2017, and yet this current squad looks better than any of their previous entries, at least on paper. Championships are quite clearly not won on paper, but the on-court product has been outstanding as well.

When the Bulldogs play in their first tournament game next Friday or Saturday, they will be looking to complete the first perfect season since the 32-0 Indiana Hoosiers in 1976. In order for them to do so, they will need to get strong performances from Canadian 6-man-of-the-year Andrew Nembhard, who will undoubtedly be ready when his number gets called. No one knows how the season will finish, but to this point, the transfer to Gonzaga looks to have been the perfect decision, as both Nembhard and the Bulldogs as a collective will look to make history in just 4 weeks time.