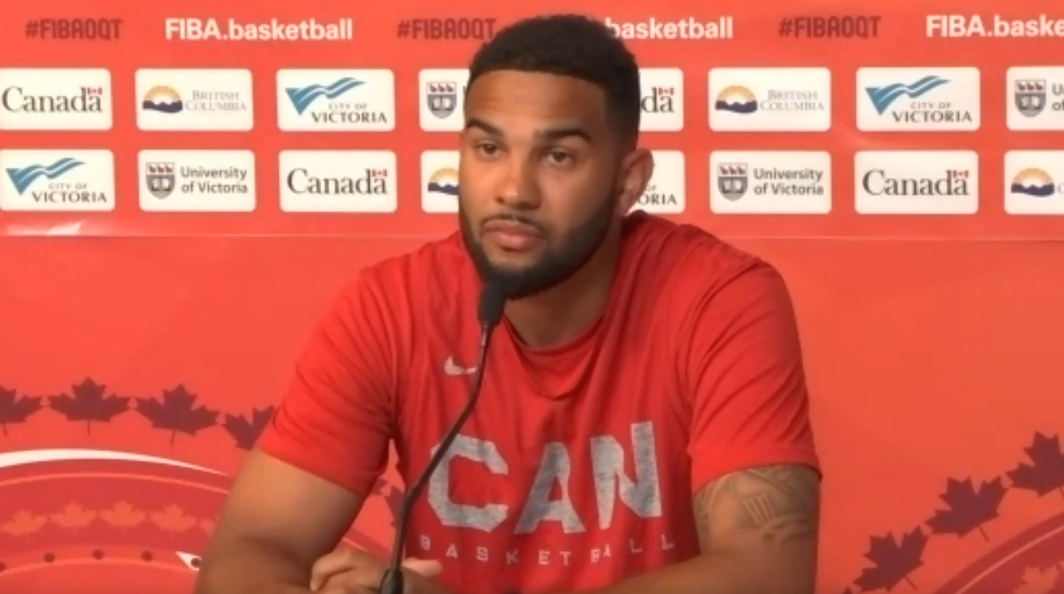 Canada is not only entering the FIBA Olympic Qualifiers as a host nation, playing on the same hardwood that the Toronto Raptors won the NBA Finals on in 2019, but as the overwhelming favourites to qualify for the Olympics–a position Canada hasn’t been in many times over the years.

“I don’t feel like we’re the hunted because in my mind we haven’t done anything yet,” said Joseph who has played 44 games in Canadian colours. “Yes, we have a talented group of players, but we’ve got to put it all together.

“We’ve had talented groups before…but at the end of the day everybody is professional, we all lace up our shoes the same way and they’ve got great teams as well.”

The margin for error is slim when it comes to Olympic Qualifying Tournaments. Canada’s first two games against undermanned Greek and Chinese teams are favourable on paper and should serve as a good barometer of where the team is after a training camp where their lone scrimmage against another team was the U19 Canadian squad but they’re also the only two games Canada can reasonably afford to lose.

Once you reach the semi-finals – it’s the Olympic berth or nothing.

Canada’s head coach Nick Nurse says he’s “very pleased” with how his team has come together throughout the training camp and he sees the roster as “deep” with players who play specific roles and play them well. Nurse said during media availability in Florida that they started training camp with a small package of defensive and offensive schemes with the intention to build on them as much as possible.

“I don’t think you’re a good team if you can’t play defence…we’ve worked very hard at that end. The playbook is, well, in my opinion is not very vast at all, in Cory’s opinion, too vast,” said Nurse with a laugh.

“There’s not a lot in there, tomorrow we start finding out a little bit more who we are, and some of the things that will suit this group of guys as we go here.”

While Canada’s lack of friendly games has been a hot topic and a point of concern over the past two weeks, Greece’s head coach Rick Pitino said it was an advantage for the Canadians as teams will be “blind” when it comes to their schemes coming into this tournament.

“Our guys are ready to play against somebody else, that’s for sure. It’s been a long preparation process, obviously with the tournament supposed to be last summer even adding to that,” said Nurse. “We think it’s an incredibly competitive tournament, lots of good teams.”

The transition to FIBA rules was a point of emphasis in the film room and in scrimmages during the Canadian team’s time in Tampa and Nurse says they’ve done “everything” over the past two weeks to ease that change for their players and they’ll be ready to play Greece tomorrow.

National team stalwart Melvin Ejim withdrew late in the process as the team travelled to Victoria, B.C. for the tournament, and will not be with the team. Ejim was looked on to play a key role for the Canadians as a veteran of the FIBA game, and someone who could slide between both forward spots off the bench.

What Canada is lacking in size, they’ll be looking to make up for in talent as they’re bringing eight NBA players to the tournament. While that’s just short of the nine NBA players they brought to the 2015 FIBA Americas Championship squad, they’re bringing a roster that has the potential for more consistent offensive production, led by RJ Barrett and Andrew Wiggins, and the potential to switch one through five in certain line ups.

“I’ve been here for a while, I’ve had talented groups before and we couldn’t get the job done, so we’ve got to be extremely focused, and put it all together and get out there and play extremely hard,” said Joseph.

Anthony Bennett, Wiggins, Dwight Powell, Aaron Doornekamp, Andrew Nicholson and Joseph all are keenly aware of what is at stake over the next week.

“We definitely remember it, I think we’re all at different points individually now, I think we’re all different players now, but we definitely remember it and it still stings,” said Joseph. “I’m trying to get that feeling off, we gotta address it a little bit, which we talked about it a little bit, but at the end of the day we’ve got to come in here with a clean slate and do our work.”

For Joseph, who’s been with the Canadian Basketball in different forms for over a decade, qualifying for the Olympics is one of the few things left for him to do with the team.