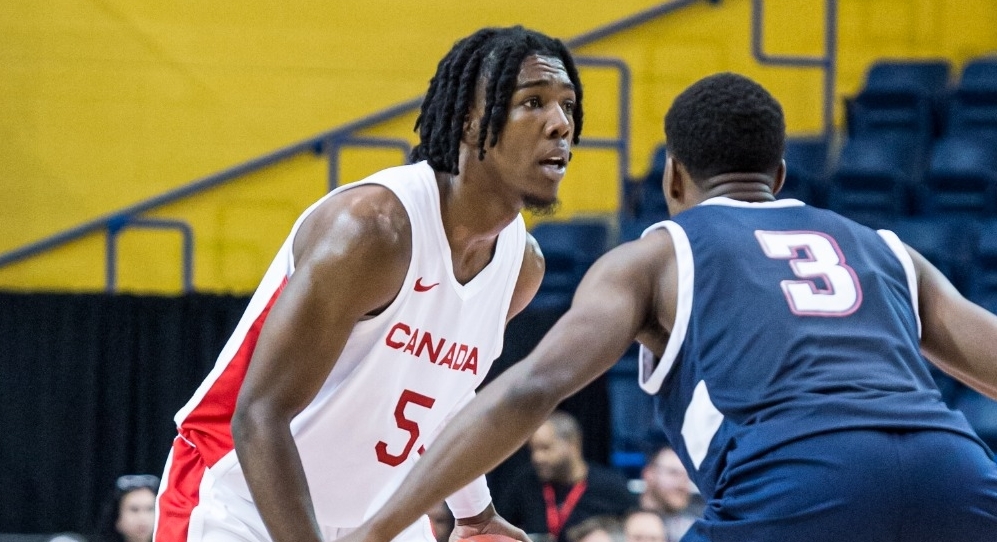 Home » On Point Blog » Canadian women advance to Globl Jam Gold Medal Game to face France, while men bow out to Keyonte George and the Americans

The Canadian U23 women’s team took care of business on Saturday night and so are off to the Globl Jam finals after a massive 85-60 win over the American representatives Virginia Commonwealth University (VCU).

Merissah Russell opened the scoring for Canada for the third game in a row, scoring all four of Canada’s first points of the game – but the Americas were hungry for a win after going winless throughout the round-robin phase and came out looking composed and finding good shots around the perimeter to take a 22-19 run after one quarter.

Russell first made three at the start of the second quarter and took the lead off a Russell fast-break bucket. Russell came into the tournament as someone who didn’t see much time on the AmeriCup roster but has found her stride as one of the lead scorers for Canada at Globl Jam.

Canada began to take control after that, using their size in the post, with Phillipina Kyei and Aaliyah Edwards controlling the paint defensively for the Canadians. Shayeann Day-Wilson would hit her first three on her way to 18 points, and Canada took a 46-37 lead into the locker room at halftime.

The second half started with a 7-0 from Canada as Day-Wilson knocked in three-point shots, and Canada started to run away with the game as their defense created multiple fast-break opportunities.

Edwards fell just short of her usual double-double with 10 points and nine rebounds, but Canada took a 30-point lead in the final frame, with every member of the roster contributing in different ways.

Taya Robinson posted 29 points, four rebounds, four steals and three assists. in her final game with the VCU team, she led all scorers.

Only the Globl Jam finals remain for Canada, where France awaits them after a close 74-73 victory over Belgium in the first semi-final game of the day. The finals are a rematch of Thursday night’s women’s game that saw Canada win 73-56. The game will take place at 3:30 p.m. on Sunday and will be broadcast on Sportsnet.

The first men’s finals in Globl Jam history will happen without Canada, as America’s Baylor Bears upset them 93-87 in the semi-finals.

Canada came into the game well rested and started on a 9-2 run capped by a deep pull-up three from G-League Ignite prospect Leonard Miller before The Americans could call a timeout. Miler would follow it up with would appear to be a clean block that pinned the ball between the hoop and the backboard – although the officials called it a foul.

Windsor product and OUA first-time all-star Thomas Kennedy got involved in the action early as well as he scored 10 of Canada’s first 17 points, but the USA wouldn’t go quietly and capitalized on a series of turnovers and missed shots to take the lead at the end of the first quarter.

A frantic pace of play would take place at the start of the second quarter, with each team making mistakes on offence. Keyonte George began to find his shot, bouncing back from the previous game where Canada held him to just 29 per cent shooting. USA’s lead grew throughout the quarter while they shot 7-of-13 from three-point range, with George scoring 22 points in the first half to take a 58-46 lead.

The second half opened with Leonard Miller taking a big bump and heading to the line and George attracting multiple Canadian jerseys every time he drove past the three-point line. The defensive pressure spurred on a 11-0 run from Canada, with Leonard and his brother Emanuel Miller leading the charge to tie the game 64-64, but the Americans would take a two-point lead into the fourth.

George was able to find his way past Canadian defenders in the fourth and the Americans narrowly held on to their lead while their shooting began to cool off. Kennedy took a whack on the fast break and Canada held their first lead since the first quarter, but George was unstoppable, and took the lead once again with a steal and a tough, falling midrange floater.

Two back-to-back dunks from Baylor would be the dagger for the game, giving the Americans their first win of the tournament – and a spot in the finals to take on Brazil at 7 p.m. est. on Sportsnet.