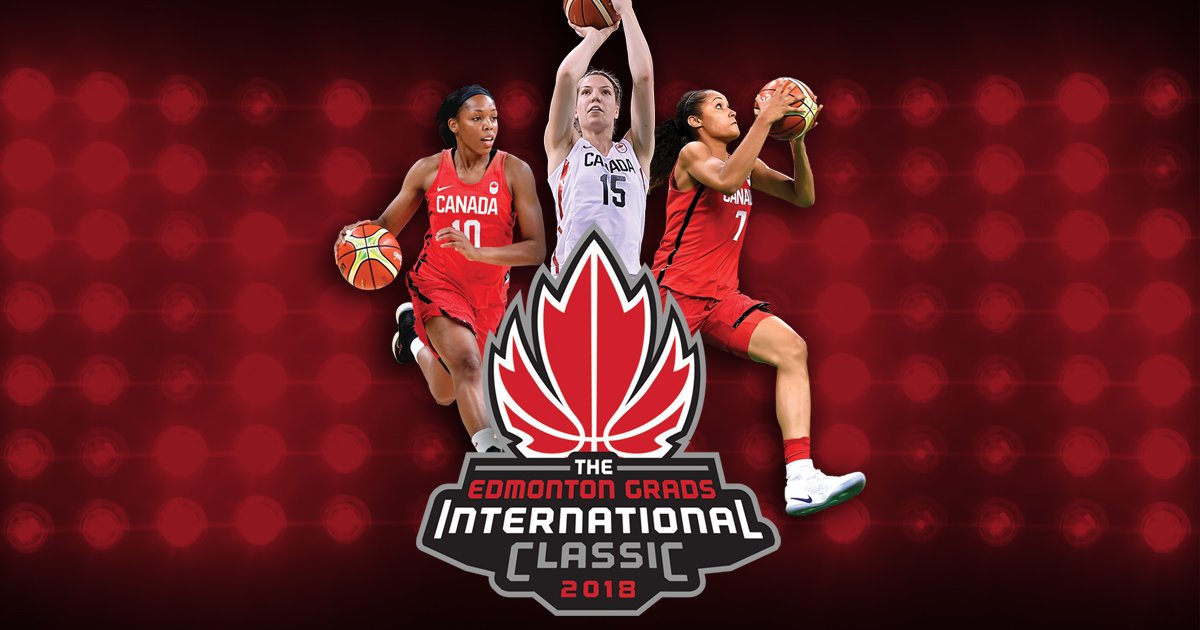 EDMONTON, Alta. (May 17, 2018) – Canada’s Senior Women’s National Team will face Turkey in a three-game exhibition series as the Edmonton Grads International Classic returns to the Saville Community Sports Centre in Edmonton on July 4-7.

2018 EDMONTON GRADS INTERNATIONAL CLASSIC – TURKEY VS. CANADA
Single game tickets and full tournament passes are now available here for as low as $8.00.
“Playing at home is always an honour and privilege and one that our entire team and staff look forward to,” said Lisa Thomaidis, Head Coach, Senior Women’s National Team. “We appreciate the support the City of Edmonton has always shown our team and we can’t wait to get back on the court to play against a world class team in Turkey this July.”This will be the third edition of the Edmonton Grads International Classic after Canada faced China (2016) and Brazil (2014).

The Edmonton Grads International Classic is named in honour of the women’s basketball team who rose to fame en route to setting a North American record with the best winning percentage (96.2 percent) of all-time. The team won 502 of 522 official games and also claimed the first women’s world basketball title in 1924.

Canada Basketball is also proud to announce the creation of a Most Valuable Player Award for the Edmonton Grads International Classic in honour of long-time Edmonton city councillor, Bryan Anderson.  A former high school physical education teacher and local basketball coach, Anderson was instrumental in creating the basketball partnership between Canada Basketball, Alberta Basketball and the City of Edmonton.

Currently ranked 7th in the FIBA World ranking presented by Nike, Turkey qualified for the FIBA Women’s Basketball World Cup 2018 after a fifth place finish at the FIBA EuroBasket Women 2017.  Turkey finished sixth at the 2016 Rio Olympics and earned a fourth place finish as the hosts of the 2014 FIBA World Championship for Women.

Prior to the Edmonton Grads International Classic, Canada will hold Senior Women’s National Team Tryouts (June 15-21) and Phase 1 Training Camp (June 22-July 3) at the Saville Community Sports Centre.  Additional information regarding both camps will be announced at a later date.

The Edmonton Grads International Classic will help Canada continue preparations for the FIBA Women’s Basketball World Cup 2018 (Sept. 22-30) in Tenerife, Spain.  Canada finished fifth in 2014 for their best result since winning bronze at the 1986 FIBA World Championship for Women.