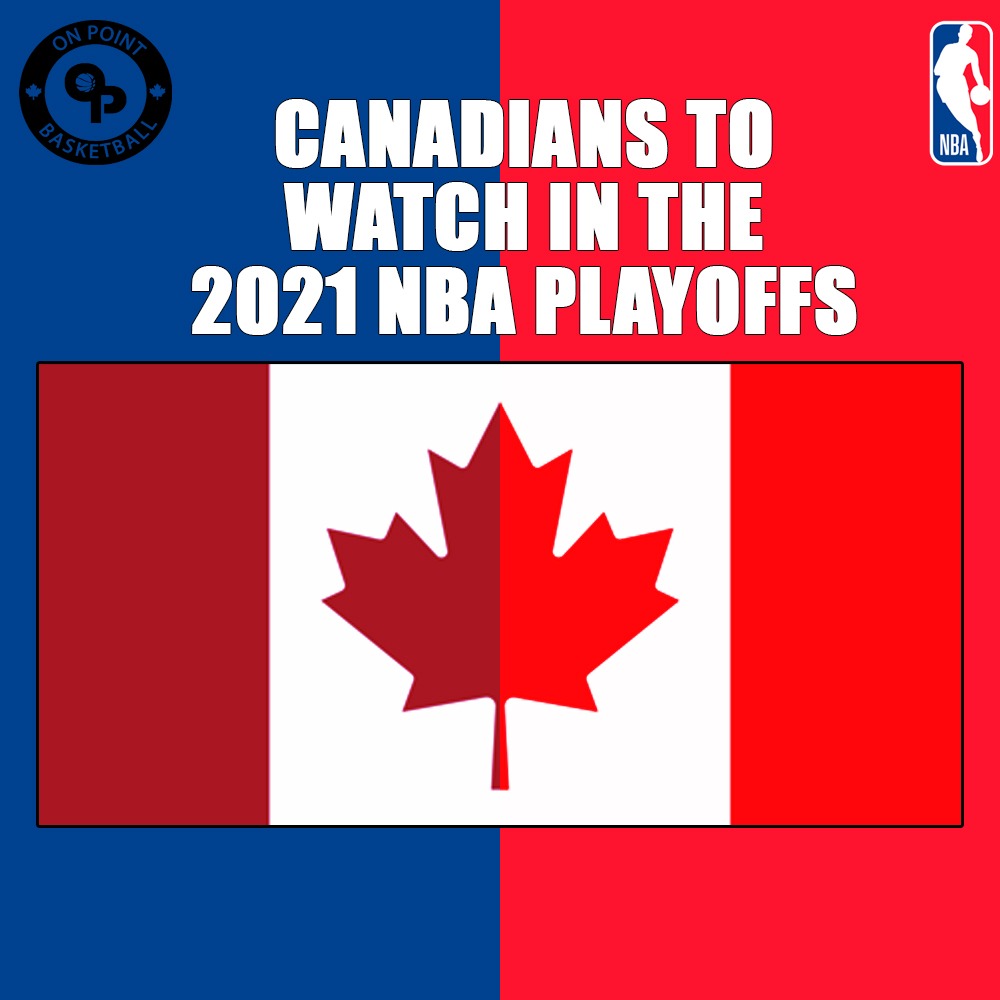 Canadians to watch in the 2021 NBA Playoffs

The Toronto Raptors will not be a participant in the NBA Playoffs for the first time since 2012, but there will still be a lot of Canadian content on display when the ball tips off for the postseason. This year, there are 10 Canadian players on playoff rosters, and a majority of them will be playing big roles and logging heavy minutes on the quest to win an NBA title. In this article, we will spotlight the Canadians to watch in this year’s field, from the play-in tournaments all the way to the finals in mid-July.

The New York Knicks have been one of the best stories of the 2020-2021 NBA season, surprising everyone and finishing as the four seed in the Eastern Conference for their first playoff appearance since 2013. RJ Barrett has been one of the key pieces towards the team’s success, as his numbers are up across the board from his rookie season. Barrett is averaging 17.6 PPG this year on an efficient 44% from the field, while shooting 40% from three compared to his rookie three-point percentage of 32%. Barrett is becoming more of an all-around player as well, and has averaged 5.8 RPG and 3.0 APG on the season. Although the numbers have been good, they don’t quite tell the entire story on just how valuable Barrett is, and there’s no doubt that he will be a crucial piece for New York if they want to have an extended run in the playoffs. Besides Julius Randle, Barrett is just as important as anyone on the roster, and he’ll have to perform immediately as they take on Trae Young and a tricky Atlanta Hawks team in the first round.

The Boston Celtics have experienced a bit of an up-and-down season, but they’ve managed to qualify for the top spot in the East’s play-in tournament, giving them a good chance to get into the playoff field. Canadian Tristan Thompson has been a welcome addition to the team this year after his arrival from Cleveland, and he seems to have fit into his role fairly nicely. Thompson is averaging just under 24 minutes a game so far in Boston, and has played well despite the limited time compared to what he was receiving from the Cavaliers. Thompson is averaging 7.6 PPG on 52% shooting, alongside an impressive 8.1 RPG. The numbers aren’t necessarily the flashiest, but the role he plays for the Celtics is important, and that level of importance will grow even further when the game slows down to a half-court pace during the postseason. Boston will have a tricky first game against the Wizards, but should be the favourite to win it and take the 7th seed in the East. Look for Thompson to play a valuable role for a Celtics team that is looking to find some stability and put an underdog run together.

The Indiana Pacers have had a rough go at things this season, but especially as of late, former Raptor Oshae Brissett has been a really nice piece for them. Due to injuries and other setbacks, Brissett has featured in a big way for Indiana over the last month and a half of the season, and it can be expected that his role will continue in some form into the playoffs. Brissett has been scoring in double figures in nearly every appearance for the Pacers this season, and he saved his best performance for last against Toronto this past Sunday afternoon. Brissett put on a show against his former team, scoring 31 points and grabbing 10 rebounds, and while it may not be realistic for those numbers to continue, Brissett has proven that he can play an important role for Indiana in the play-in tournament. The Pacers will have a tough test against the Hornets on Tuesday, and should they win it, would go up against the loser of Celtics vs Wizards to see who can get the 8th seed in the bracket. One thing’s for certain, Brissett will have a large impact on how far Indiana can go this postseason, which is something that not many would have expected just a few short months ago.

The Dallas Mavericks will be happy with the way the regular season went for them this year, as Luka Doncic and company secured a #5 seed in an extremely competitive Western Conference. Toronto native Dwight Powell is in his 6th full season with the Mavericks, and although his role has shrunk a bit this year, he’s still managed to put his fingerprints on games and be a valuable piece in their puzzle. Powell is averaging 16.7 minutes-per-game, which is his lowest total since the 2015-2016 season, but his play has still remained impressive. Powell is averaging 5.9 PPG and 4.0 RPG in those limited minutes, with a few impressive performances along the way such as a 25-point showing in a win against the Lakers in April. While Powell isn’t one of the biggest names on the roster, he has a solidified role with this team, and Canadian basketball fans will get to see a lot of him as he takes on the Clippers in what should be one of the best first round series of this year’s playoffs.

What Steph Curry has been able to do for the Warriors this season without Klay Thompson has been nothing short of spectacular, but he hasn’t done it completely alone. Andrew Wiggins has fit in fairly nicely in his first full season with Golden State, and especially late in the year, has really started to turn things on and start producing. Wiggins has played in 71 of the team’s 72 games this year, and is averaging 18.6 PPG despite a less-than-ideal start to the campaign. Wiggins has been very solid defensively this year for the Warriors, and finished with a career high in both FG% and 3PT%, while grabbing 5 rebounds-per-game and adding 2.5 assists every night. Especially in late-April and the month of May, Wiggins began to hit his stride, and will play a massive role in the Warriors chances of getting through the play-in tournament. Outside of Curry, Wiggins is going to be relied on to score big buckets, and if he’s able to do so, the Warriors should be able to make it into the postseason field, even if they’re unable to beat the Lakers in what should be a classic on Wednesday night.

The Memphis Grizzlies have made the postseason for the first time since the 2016-2017 season thanks to the play-in tournament, finishing as the 9th seed in the Western Conference. Despite what the low seed may suggest, the Grizzlies have been a good team this year, only finishing that low because of how competitive the West is. Mississauga, ON native Dillon Brooks has had a career season this year in his 4th year in the league, setting career high’s all across the board. Brooks is averaging 17.2 PPG 2.9 RPG and 2.3 APG across his 67 starts this season. Brooks is one of the most valuable players to the Grizzlies success without a doubt, and will have to feature in a big way if the Grizzlies hope to surprise everyone and get into the first round. Their first opponent will be the San Antonio Spurs on Wednesday night, and should they beat them, they would have to battle it out with the loser of Lakers vs. Warriors for the final spot in a difficult conference. No matter what happens, it seems certain that both Brooks and the Grizzlies as a whole are continuing to improve, and their development will likely keep trending in the right direction for years to come.