(Toronto, Ont. – August 11, 2014) – The Cadet Men’s National Team was looking to string together back-to-back victories today at the FIBA U17 World Championships as they took on Australia. They did just that with a strong showing against the Aussies, winning 85-74.

Canada displayed a very well-balanced attack today as 10 of 11 dressed players contributed to the scoring column. Canada was led by Jamal Murray’s (Kitchener, Ont.) 25 points (8-16 FG), seven rebounds, and two assists in 26:33 of action. Howard Washington Jr. (Buffalo, N.Y.) was the perfect complement, chipping in with 18 points (7-14 FG), five rebounds, one steal, and one assist in 20:43 of floor time.

Both teams came out of the gates ready to play. In the first quarter Canada was mostly playing from behind, but kept it tight and finished the quarter down three, 25-22.

In the second frame the Canadians began to play with tenacity on the defensive end, getting their hands in passing lanes, forcing turnovers, changing shots at the rim and rebounding by committee. At halftime, that intensity had buoyed the Canadians to a 37-33 lead.

The third was tight once again. The Canadians struggled to find an answer for the 6’11’’ Aussie big-man as he continued to score at will. However the Canucks answered with a well balanced scoring attack and were able to maintain their lead, 59-51 after three.

The fourth was much of the same, as the red and white shared the ball and got everyone involved. The Aussies’ game-plan became readily apparent as they continued to feed their big-man down low. In spite of a spirited effort by the Australians, the Canadian’s diverse attack was too much to handle as they came away with the 85-74 victory.

Head Coach Dave DeAveiro credits his team for grinding out the win:

“Slow early start for us today. I give our guys credit for sticking together to get back in the game and eventually coming out on the winning side.”

Looking forward to the round of 16, DeAveiro added:

“Australia was a tough opponent and they definitely prepped us for the opponents we will see next round.”

Canada is now 2-1 in pool play in the 2014 FIBA U17 World Championship. They now move on to the round of 16. Their next game will be on August 12, 2014 against Angola who is coming off an 11-point loss to Greece. Tip-off time is TBD. Don’t miss a minute of the action. Watch the free FIBA Live Stream:http://www.youtube.com/playlist?list=PLCXERy73Oiz8SqgtUNNxImORlMUra5Rb4

About Canada Basketball:
Canada Basketball is a private, not-for-profit corporation committed to excellence in leading the growth of the game domestically and in pursuing medal performances on the international stage. 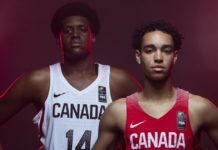