TORONTO, ON – Today the National Women’s Team was officially welcomed back to the city of Edmonton at a reception hosted by Mayor Don Iveson.  Photos of the event available here.

“To be in Edmonton getting to know the city and the city getting to know us has been a tremendous honour and privilege,” said Lisa Thomaidis, Head Coach, Women’s National Team.  “In my time with the team, we’ve never had the depth and level of talent we do here this year. We are very excited to showcase  it at the Pan Am Games and FIBA Americas to vie for the most coveted prize – a berth to the Olympics, next year in Rio.”

The Province of Alberta, City of Edmonton and Sport Canada have been instrumental partners in giving the team a home and earning the right to host the 2015 FIBA Americas Women’s Championship at the Saville Community Sport Centre, August 9-16.

“We’re delighted to welcome home the Canadian Women’s Basketball Team to prepare for an exciting summer of competition,” said Edmonton Mayor Iveson. “This is a great opportunity to showcase the spirit of culture and sport that makes our capital city a wonderful place to live and visit. For Edmontonians, it is an exciting opportunity to see some of the world’s best women’s basketball right here in our own city.”

The team is looking forward to an exciting season, playing in back-to-back domestic competitions – TO2015 Pan Am games in Toronto and hosting the Olympic qualifier in Edmonton.

“This summer feels like something dreams are made of. Last year when they announced we would host, the whole room erupted into screams,” said National Team Shooting Guard and 2012 Olympian, Kim Gaucher. “It gives me goosebumps every day, thinking about standing up there and singing the national anthem in front of 2000 screaming fans and then just dreaming of the moment where we finally qualify and being able to share that with this whole country.”

Gaucher along with 16 athletes will continue phase one training in Edmonton until May 25,  in advance of heading to Spain and France for a six-game European Exhibition Tour. After three days training with the senior team, four athletes were released today and will participate in the national development team, which is heading to Korea in July for the FISU Games.

Team Canada will be available to media during the following Phase 1 Training Camp dates. The full list of athletes, staff and schedules follows below. 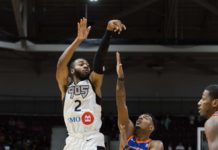 Raptors 905 Win Yet Another Thriller Against Westchester 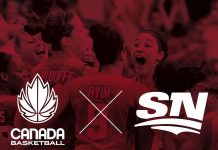 Growing a Canadian Game: Sportsnet and Canada Basketball team up for... 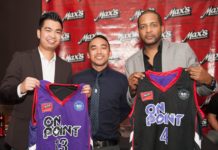