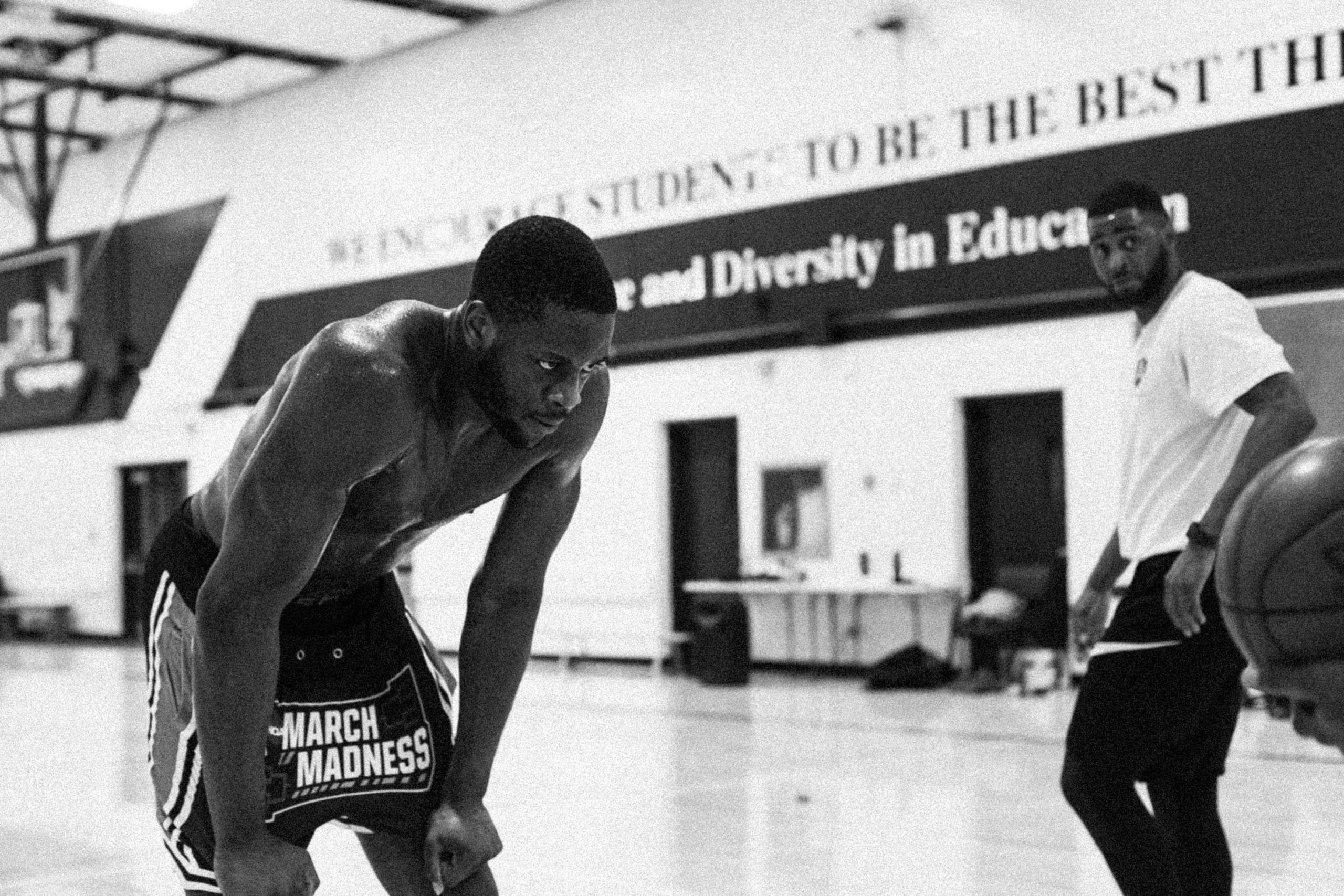 By David RoubenApril 24, 2021No Comments

On Point Exclusive by David Rouben

After a maiden NCAA Tournament run in his senior season that ended against USC in the Sweet 16, Eugene Omoruyi is declaring for the NBA Draft. Even though he only played one full season at Oregon, the program left a lasting impression on the Rexdale, Ontario native. In Omoruyi’s declaration statement, he called Eugene, Oregon his “second home.”

Oregon has always been Omoruyi’s dream school. Before he went to the NCAA Tournament, before he dropped a career-high 31 points in his first game in a Ducks uniform, before he even set foot on their campus. A big reason for that is because of Oregon’s well-documented Canadian pipeline. Just recently, Dillon Brooks and Chris Boucher played under coach Dana Altman before going on to have very prominent NBA careers.

Omoruyi even played alongside another Canadian in Chris Duarte, who was named Pac-12 Player of the Year.

“I feel like those are all good programs over there, and it’s just a stepping stone right now for Canadians to realize [their full potential],” Omoruyi said to On Point Basketball about his decision to transfer from Rutgers to Oregon. “When you play for a coach that has such great success with Canadians, why not go that route?”

Perhaps the biggest storyline during the NCAA Tournament was the success of the Pac-12 conference. That’s why, even though Rutgers did make it to the Tournament this year, Omoruyi likely wouldn’t have had the same eye-popping numbers if he had stayed there. In a losing effort against USC, Omoruyi had 28 points, 10 rebounds, two assists, two steals, and a block.

However, that doesn’t mean he didn’t value the three seasons he spent at Rutgers. When asked to reflect on the two programs, Omoruyi credits the work that both head coaches, Steve Pikiell at Rutgers and Altman, had on his basketball development.

“Coach Altman just allowed me to gain a lot of knowledge and read the game well,” Omoruyi said. “Coach Pikiell’s a defensive coach and really allowed me to learn different ways of playing the game when it comes to defence.

“When I went to college, I really loved basketball, but I didn’t really know the game too much because I was a late starter.”

One of the main reasons why he started late was because of where he grew up. Omoruyi came from Rexdale, and when he was young, there weren’t many affordable programs in that area that people could sign up for. Enter Chris Campbell, who started Motion Ballers mainly to highlight the talent out of Rexdale, and give them a program with real structure.

“That was actually sensational,” Campbell said when he saw Omoruyi ball out at the NCAA Tournament. He knew the fruits of his labour had been realized. “When I look at Eugene, seeing Eugene play, especially when he was at Rutgers, it just reminds me of why I started this whole thing which was to give these guys opportunities.”

Indeed, Omoruyi credits Campbell for starting off his basketball journey, and letting him know that he could do something with basketball. However, he was still very raw at the time, which is why Campbell’s most unique memory of him is when he served as the team’s designated point forward.

“In Grade 7, I remember he grabbed a big rebound and I’m like oh, and then he started dribbling the ball up the court and in my head, I’m like ‘theoretically, the tallest kid in Grade 7 doesn’t bring up the ball.’”

Campbell remembered thinking his team was going to lose games because of that experiment, but he did it with Omoruyi’s future in mind. Then, by the time he got to Grade 8, and he was more refined, it was “a wrap.”

“When I look at a guy like Eugene, I’m glad my thought process wasn’t ‘okay, work on your drop step.’”

His time with Motion Ballers is another reason why, whenever he’s being announced, he always makes sure they say he’s from Rexdale.

“I always highlight that because it wasn’t easy growing up there and it wasn’t easy coming out of there,” Omoruyi says. “They overlook Rexdale, in many cases they think that Rexdale kids are bad. I feel like me coming out of there really shows that Rexdale is a place that needs to be looked at more for young youth that are playing the game of basketball, because there’s talent there but they’re just hidden.”

By the time Omoruyi got to high school, he was involved in plenty of different basketball programs. His time at Orangeville Prep sticks out to many, since he was there around the same time as Jamal Murray and Thon Maker but, as Omoruyi is quick to point out, their paths never crossed.

That said, seeing Maker’s work ethic opened his eyes on how to approach the game and be great at basketball. “I do believe the Orangeville Prep system helped me a lot in taking that major stepping stone that I needed in high school.”

Another key basketball development moment for Omoruyi was also during his early time in high school, before Orangeville when he attended West Humber C.I. under and played under Head Coach Andre Bobb and assistant Errol Patterson.

Later on, in high school, was when Omoruyi met Chris Smalling, who has become a father figure to him. Omoruyi played under Smalling  in the CYBL and AAU for the Advantage Titans. Once he joined Smalling’s team in CYBL, he made an impression right away.

“He came out to practice and he dunked the ball off an alley-oop, and everybody’s jaws kind of dropped,” Smalling said when recalling one of his earliest memories of Omoruyi.

As far as the performance that stood out to him most, Smalling remembers when they traveled to Pittsburgh to play in a tournament. In the semifinals, they upset no. 1 ranked UPlay on the back of a stellar performance by Omoruyi in which he hit eight 3-pointers. At Oregon, he shot 37.6% from 3 compared to 23% during his three seasons at Rutgers. But a performance like that is proof that he’s always had the ability to stretch the floor. The key to unlocking Omoruyi’s potential, according to Smalling, was handing him the keys.

“I think great players, or really good players, have a way of figuring it out, and all they need is opportunity. We allowed Eugene to do a lot of different things, bring up the ball, we allowed him to run the offense a little bit. Any time he wanted to shoot, he had the green light.”

Above all else, Omoruyi valued the attention he received as a result of playing with him. “Coach Smalling was the one that helped elevate me to the level that I needed to get to, putting me in the right position, and in front of the right eyes.”

When it came time to commit to a college, Smalling accompanied him and his family on the visit to Rutgers. He knew that Rutgers would be the right program for him because of his personal relationship with Pikiell. Smalling knew Pikiell going back to his days as an assistant under Jim Calhoun at UConn, and knew he’d be the perfect coach for Omoruyi because of how much they both value defense.

While Omoruyi’s offensive numbers steadily improved during every season, it was his defense that stood out at Rutgers and has remained consistent. He led the entire Big Ten in charges drawn – he did the same during his time at Oregon.

Perhaps that’s why the player Smalling compared Omoruyi to, back when he committed to Rutgers, was Draymond Green. High praise, indeed, but when asked to revisit that comparison, Smalling stood by it.

“The comparison that I see in both of them is the passion, playing with that chip on your shoulder, always having to prove yourself over and over again.

“From a basketball standpoint, everybody knows Draymond’s basketball IQ’s off the charts. And I didn’t realize that with Eugene as much, but they saw it in his games this year. Just his ability with the way he sees the court, the way he passes the ball, to set up teammates.”

Even though Omoruyi never averaged more than 2.4 assists in a season in college, passing was something both Smalling and Campbell highlighted as an attribute that he excels at. Tony Stubblefield, his assistant coach at Oregon, even told his squad “if you want the ball, give the ball to Eugene. He’ll find you.”

Green also declared for the draft in his senior season. Perhaps it’s because of the slight that NBA teams have towards older players that allowed him to slide all the way to the second round before the Warriors picked him up. That could end up being Omoruyi’s draft ceiling as well, but he’s happy to play for any team that wants to win and wants someone who can do the little things.

After a year in which Canadians were shut out from the draft podium, seeing Omoruyi get selected would be a welcome sight. However, while Omoruyi wants to put on for Canada, he also wants to represent his family back in Africa (Nigeria). “This was a big thing for everyone around me because we’ve never been here before, we’ve never been in a position like this before.”

Even if he goes undrafted, guys like Fred VanVleet have shown that being drafted isn’t the be-all-end-all in terms of getting to, and thriving in, the NBA. And once he gets there, he’s going to keep working on the parts of his game that he’s good at, while also adding more attributes like the ability to shoot off the dribble, or creating his own space.

As for whether or not he’ll attend the draft, Omoruyi’s mind is already made up.

“I’m going to stay home with my family. I started this journey with my family, my brothers, I feel like it’s only right to take this next step with them.”