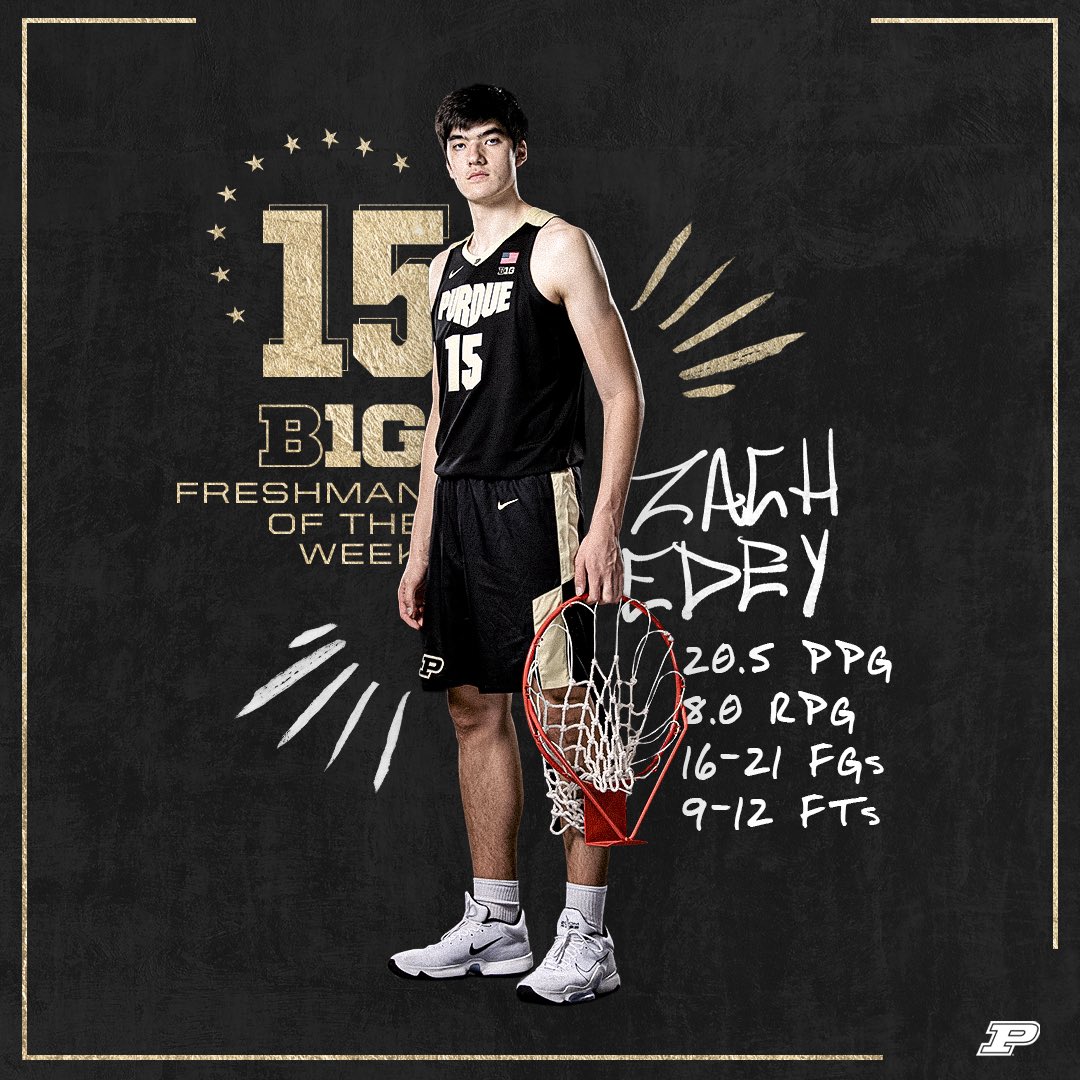 For Canadian Zach Edey, the sky is the limit

By Kyle OliveiraMarch 10, 2021No Comments

Home » On Point Blog » For Canadian Zach Edey, the sky is the limit

When thinking about the careers of the NBA’s tallest players, there never seems to be much middle ground. On one hand, you have hall of famers such as Shaq and Yao Ming, who were able to completely dominate any game with not only their size but their surprisingly impressive athleticism. On the other hand, you have players such as Tacko Fall and Boban Marjanovic, who are impressive talents without a doubt, but are not players who are able to consistently overcome the many disadvantages their size creates. Being over 7 feet means that you can’t be as durable, and often means you can’t be as agile. There have been a lot of 7-footers in basketball history, but there haven’t been many that don’t have to sacrifice athleticism for height. Purdue’s breakout star Zach Edey is one of those special players.

Perhaps the most interesting part of Edey’s story is that even though he was always tall, he never had much interest in the game of basketball. Growing up in Toronto, Edey always played hockey, and was a closing pitcher in baseball during the summers. His original dream was to be the first 7-foot player to ever make the MLB. Only in 2017 would Zach pick up a basketball seriously for the first time, midway through tenth grade. One of Edey’s friends’ dads had become the coach of the basketball team and spent weeks convincing Zach to play, and once he agreed, he was on his way.

Edey quickly fell in love with the sport, and began to excel regardless of his lack of experience. His growth was quick, and Vidal Massiah, founder of the Northern Kings AAU program who worked with Zach for years, helped him find his footing.

“It was really turning his transferrable skills, trying to utilize them for a different sport.”, said Massiah. “He likes contact, and that’s from hockey, and as a baseball pitcher he analyzes and processes things. I really focused on trying to build from his experiences in other competition.”

Edey eventually went on to join the prestigious IMG academy in Florida. At IMG, Edey was able to develop amongst other D1 talent, and was named a top 5 Canadian senior in his class, despite not being a top prospect for college.

Edey was listed as a 3-star recruit, with most of the concerns from scouts coming from his rawness. After all, he had only been playing basketball for 2 and a half years, and his game was not nearly as refined as most of the other players he was playing with. Inexperience aside, Edey was surprisingly mobile for a 7-footer, and was not concerningly skinny, which is often an issue for young players who grow tall quickly. Zach also possessed a fairly high basketball IQ, and it was only a matter of time before he was able to translate that into results on the court.

“I thought a majority of coaches slept on him.”, said Massiah. “A lot of coaches missed out, they did not understand the person, they didn’t know his story. If you read into his story you’d know that he’s super intelligent, and that’s not just from a GPA perspective, more in terms of absorbing and processing information.”

When it came time to decide, Edey had a few options, and rejected Minnesota and Seton Hall in favour of Purdue University, a school with a history of developing 7-foot players. It seemed like a perfect fit for the Ontario prospect, and everyone at the school was excited to see how it would pan out, although it was viewed as more of a long-term project. Edey was originally on the cusp of being redshirted for his freshman year, but due to COVID and impressing in camp, he was given his place on the roster.

Upon joining the team, Edey quickly developed, and any questions that people may have had were swiftly answered in the Boilermakers first three games. Coming off of the bench, Edey scored 19, 17 and 13 points respectively in the team’s first three games, chipping in with 6.5 RPG as well. The three-star recruit was red hot out of the gate, and secured his place as the backup centre, which was impressive considering he was a true freshman who picked up a basketball seriously for the first time in 2017.

From that great start on though, Edey experienced a little bit of a dip. That red hot beginning was not sustainable, and Zach was still in the process of maturing and adjusting himself to the fast-paced college game. Another factor for the dip in numbers was that Purdue play in the hardest conference in the country: The Big 10, and conference play was beginning with a hectic schedule. Edey needed time to readjust, and as the season began drawing closer to March, he started to really find his comfort zone.

One of the biggest improvements Edey added to his game was passing, and it allowed for more space on the offensive end. Opposing defences had to respect his game as more than just standing under the basket, and so he found himself in more 1-on-1 matchups, which are a bit easier to dominate when you are 7-foot-4, 285 pounds.

As the regular season rounded off, Edey impressed with multiple big-time performances off of the bench including a 20-point 9-rebound effort in the last rivalry game with Indiana. Unlike some 7-footers, Edey doesn’t play soft, he’s agile and physical, and it was something that the basketball world took notice of this past week.

“I just wanted to be that big, strong stone-faced guy that’s kind of intimidating”, said Edey to SI Fan Nation. “I’m very competitive, and I love to compete in situations like this where the team is leaning on me. It’s just my background. I’m a big, strong, heavy dude. I played hockey a lot growing up so I’m used to bumping around and I’m used to the physical stuff.”

Looking forward, Purdue is emerging as one of the biggest stories of the NCAA season. Their record isn’t mind-blowing at 18-8, but considering they play in the toughest conference in the nation, a 13-6 conference record is nothing to discount, and it’s good enough to give them the 4-seed in the Big 10 tournament. For March Madness, Purdue is currently projected to be a 4-seed as well, and will be a big underdog pick to make a deep run. If the Boilermakers want to pull that off, Zach Edey will be a vital piece as one of the first guys off of the bench. Most teams don’t have an answer for his height and talent, and Edey’s current run of form leads many to believe he will be a difference maker, including his former coach.

They say you can’t teach height, but Canadian Zach Edey has proven he is much more than his size. He’s a high character player that is constantly willing to soak up information and improve his game, and that is the biggest reason why for him: the sky is the limit.

Notes: Zach Edey has recently been named B1G Freshman of the Week after averaging 20.5ppg, 8rpg on 16-21FGs and 9-12FTs. Edey, alongside fellow Boilermaker Jaden Ivey, was also name to the B1G All-Freshman Team for 2021 by the league’s coaches.