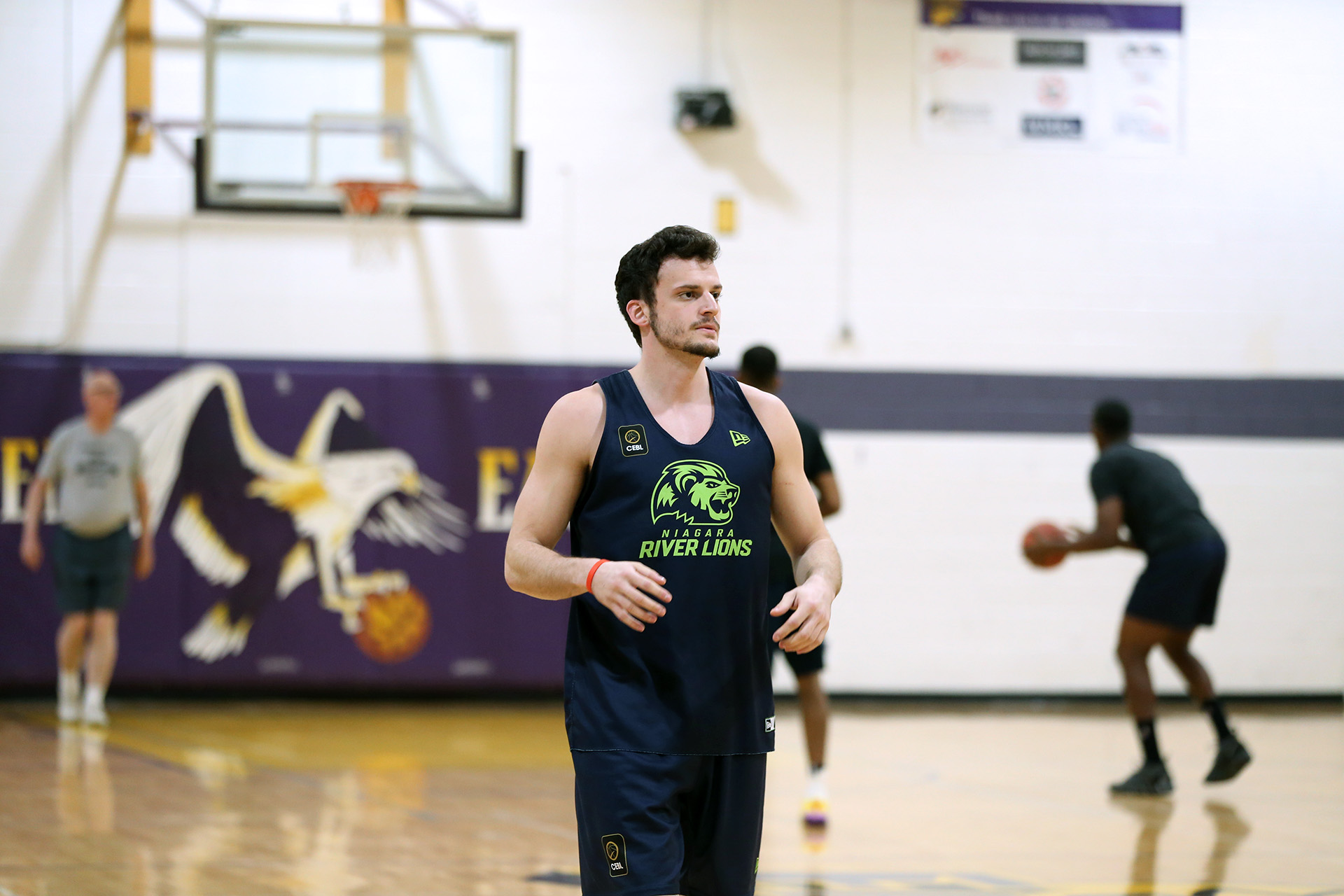 Filip Vujadinovic was the first overall draft pick in the USports round of the CEBL Entry Draft, and recently became the first player in Ryerson’s history to win five national medals, but two years ago Vujadinovic’s basketball career nearly came to a halt.

“Don’t miss this one!” Filip Vujadinovic shouted into a gym during a late Friday afternoon practice in Thorold, Ontario, as a team shooting drill for the Niagara River Lions was one made-shot away from wrapping up.

Vujadinovic, who is all but officially the team’s rookie, had recently topped off a historic career with the Ryerson Rams after winning a national bronze medal in early March. Weeks later on March 23rd, the six-foot-seven forward became the first player to be selected in the USports round in the inaugural CEBL Entry Draft by the River Lions.

“I had a very specific idea of the type of players I want to bring in, with all the guys, not just Fil,” River Lions head coach and general manager Victor Raso said. “I was looking for guys who have either exhibit winning qualities, or came from winning programs, or who’ve won at the professional level.”

For Vujadinovic, getting selected by the River Lions represented a turning point in his basketball career, one that ushered him into a new chapter.

“To know that [Raso] wanted me to be the first overall pick out of the USports section of the draft,” Vujadinovic said, “it was just an honour because of all the hard work and sacrifice I’ve put into basketball. To be able to be recognized finally by someone other than my parents, my friends, or myself, was big for me.”

Vujadinovic’s relationship with Raso dates back to the Burlington native’s high school career, when Raso was on the coaching staff of Blessed Sacrament, a Rep basketball team that Vujadinovic competed for.

The two then played against each other during Vujadinovic’s first year at Ryerson while Raso was a senior with the Carleton Ravens, and later on as Raso joined the Ravens’ coaching staff he would go on to scout against Vujadinovic as well.

“So when it came to that time,” Raso said, “I was like, ok well, Fil’s 6’7, he’s athletic, he’s strong, plus I know the characteristics that he has. So this is a great opportunity for him to get his foot in the door in the professional world, and it just made sense.”

According to usportshoops.ca, only two other universities, Carleton and Victoria, have had players who carry this distinction, and this was the first in Ryerson’s history. But the nature of making history is that it’s hardly ever an easy ride, and Vujadinovic and the Rams almost never even made it together to this point.

After an up-and-down rookie and sophomore season for Vujadinovic, he and Ryerson’s coach Roy Rana had a persistent struggle on what contributions the then-third year forward would have with the team.

During Ryerson’s senior night this past February, Rana shared their story in a pregame ceremonial speech. “We were in Ottawa and I was going to cut him,” Rana said. “It was in a playoff game two years ago and it was enough, I was like, you know what – and I’m sure he wanted to cut me, if he could cut me he would have cut me too. That’s where we were at.”

The team’s leaders, Juwon Grannum, Ammanuel Diressa, and Adika Peter-McNeilly, stuck with Vujadinovic and saved him from that fate, and he later responded on the national stage with a team-best 16 points, five rebounds, and two steals in a 59-58 semi-final win over Dalhousie.

“He won us a game at Dalhousie that put us in a national championship game just with his sheer toughness and effort,” Rana recalled.

But that didn’t necessarily make the differences between the player and coach go away. “He came back,” Rana added, “and I said, ‘you know what, Fil, I don’t know if this is right for you. I don’t know if you should stay.’ And he said, ‘no, I want to stay.’” The two then agreed they would come back in the fall and figure everything out.

If you get to ask Vujadinovic a bit more about his basketball journey, you’ll learn that he’s not a stranger to adversity, and it’s moments like these that become ingrained in his demeanor and how he pushes himself further.

In his high school playing days, Vujadinovic was cut from the Burlington section of Team Ontario, where, in Vujadinovic’s words, “there were players that don’t even play basketball anymore.” And later on he tore his meniscus heading into a Team Canada training camp after stepping off of a curb the wrong way while walking to his job, causing him to miss his senior season (“missing out that big season was heartbreaking for me.”).

After that post-season run with the Rams, Vujadinovic’s perspective changed. Before where he had seen his differences with Rana as discouraging, he approached that summer as an opportunity to show his coach that he was able to take the next step as a basketball player and a human being.

“So I was in the gym, you know, in the lab, grinding, working hard, working on my mind, not only my physical attributes, and I came back a different player,” Vujadinovic recalled, “and he told me from the first couple practices that this isn’t the same Fil he knows.”

What followed after that summer were two more national medals, a silver and a bronze, and for Vujadinovic, the five years of success he’s had in USports represents more than just himself. “I think it represents our culture with our team, as Ryerson,” Vujadinovic said. With so many changes in assistant coaches and players (injuries, players quitting, seniors who graduate), Vujadinovic explained, being able to make the tournament for five years and place in the top three every year is a testament to the team’s resiliency.

When I asked Raso if there are any moments that has stuck out to him about Vujadinovic from a mental toughness aspect, the River Lions head coach pointed out to another semi-final game that involved Vujadinovic playing on a national stage.

“This year in the national championship in the fourth quarter,” Raso told me. “It was at a semi-final game, I just remember watching the game and thinking like, holy crap, Fil is playing insanely hard. And it was like, I was remembering to when I took him to Pittsburgh for a tournament when he was in his fifth year of high school, and it was like, that kid went from that, to the guy I just saw. It was really impressive.”

The Niagara River Lions open their inaugural season in the CEBL on May 9th against the Saskatchewan Rattlers, with its first home game taking place on May 16th against the Edmonton Stingers at the Meridian Centre.

Trung Ho is a freelance reporter covering USports and Canadian basketball. You can follow him on Twitter.