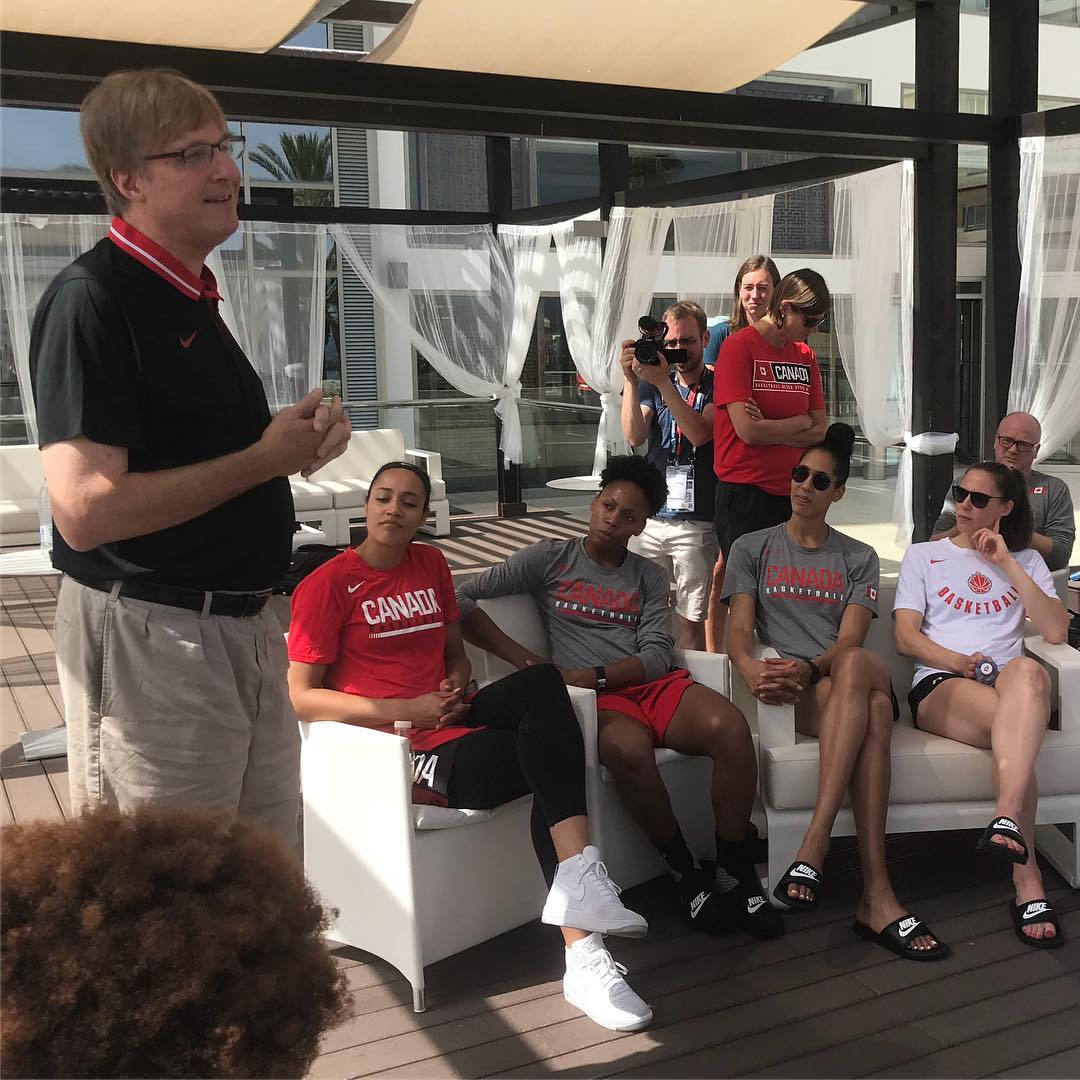 By Kajan ThiruthanikasalamOctober 7, 2018No Comments

(Toronto, ON) From starting off as a Vice President and general counsel of the Denver Nuggets back in 1990 to most recently being the Director of Athletics at McMaster University, Glen Grunwald has had a whirlwind of a basketball career thus far.

“When I started off as a lawyer in Chicago, Illinois, there weren’t thoughts that I was going to work in the NBA or the basketball world,” Grunwald reminisced. “Then one of our clients ended up buying the Denver Nuggets. The owner brought me out to Denver to be his right hand man and that sort of launched me into this whole basketball world.”

Now add the title of President and CEO of Canada Basketball to that list as Grunwald embarks on his next venture, continuing to grow the brand of Canadian basketball.

“Here, at Canada Basketball, there’s so many good people working in and supporting basketball,” Grunwald said. “Just to try and bring them all together and working together towards making this sport as successful as we can is a pretty exciting opportunity for me right now.”

Grunwald spoke about the rise in women’s basketball in Canada, noting that head coach Lisa Thomaidis is a McMaster graduate, as they recently finished competing in the FIBA Women’s Basketball World Cup (7th place finish).

“What we have is great experience not only in terms of professionals, whether it’s in the WNBA, Europe, or Australia, but also a good mix of youth and veterans,” Grunwald said of the Canadian SWNT. “We have eight Olympians on our team already and our average age is 26. And they’re not intimidated anymore.

The young talent in Canada has especially been on the rise, evident in the U19 men’s team winning gold at last year’s FIBA U19 World Cup and the U18 men’s team getting silver at the FIBA Americas this summer, which was hosted in St. Catherine’s, Ont.

“It’s a matter of nurturing these players and making sure they have a connection to our program,” Grunwald said.

And although the Canadian senior men’s national team stumbled in qualifying for the Olympics previously, they remain on track to qualify for the FIBA World Cup as they are tied with Venezuela for first place (7-1) in the FIBA Basketball World Cup 2019 Americas Qualifiers with four games left.

“Hopefully, we’ll finish it off and qualify for the World Cup and then go from there to qualify for the Olympics,” Grunwald said. “The path is there, it’s certainly achievable, and now we just have to get it done now.”

During his four-year tenure at McMaster University, Grunwald oversaw the women’s rugby team winning the national championship in 2015 and the men’s football team making the Vanier Cup in 2014 while also improving the student-athlete experience as well as breaking ground for a $60 million expansion to the David Braley Athletic Centre.

But after accepting a gig as a part-time consultant for the Memphis Grizzlies, Grunwald quickly realized that working with an NBA team and a university at the same time would be next to impossible, meaning he would have to choose between one or the other.

“I made the tough decision to step away from McMaster but I had a great four years there,” Grunwald said of his decision to step down. “I felt like I was leaving them in a good spot so I was comfortable doing that and decided to get back into doing basketball more.”

But another opportunity popped up for Grunwald after former President and CEO of Canada Basketball, Michele O’Keefe, stepped down on June 30 of this year. Although he was intrigued by it at that time, Grunwald hadn’t yet interviewed for the position.

So what changed for him?

“Some really good basketball people suggested that I do it so I took a hard look at it, talked to Wayne Parrish, who was running the search,” Grunwald said. “And the NBA doesn’t have a similar rule (like with the university rule) so I could do the consulting job with the Grizzlies and Canada Basketball.”

Although there have been a lot of wonderful moments throughout his career, there have been two memories that have stood out to Grunwald. The first one came during the very first regular season game for the Toronto Raptors on November 3, 1995, just four days after the Quebec referendum, in which Quebecers narrowly voted against separation.

“The Barenaked Ladies sang the national anthem and when they switched the lyrics to French in the middle of it, the cheer from the people in the crowd was really emotional,” Grunwald said. “It superseded the game, which was pretty monumental in itself. To have a basketball game at a venue where people can celebrate their country was a big lesson to me. It shows the importance of sports bringing communities together.”

Grunwald’s second moment goes back to Game 5 of the first round in the 2001 NBA Playoffs in which the Raptors defeated the New York Knicks at Madison Square Garden to win their first ever playoff series. The former Raptors general manager says that it was even sweeter given that Toronto, at the time, had ex-Knick players such as Chris Childs and Charles Oakley.

“I had a great exchange and embrace with Charles (Oakley) right after the game in the visitor’s locker room,” Grunwald said. “That was a really special moment for me.”

Although there are moments where he would have liked to change the decision making for certain things, Grunwald says he has had no regrets during his basketball career.

“It’s been quite a journey but a wonderful one. You never know where life can take you sometimes,” Grunwald said, laughing. “It’s been a great run and I feel very fortunate and blessed to have a job that’s not really a job.”