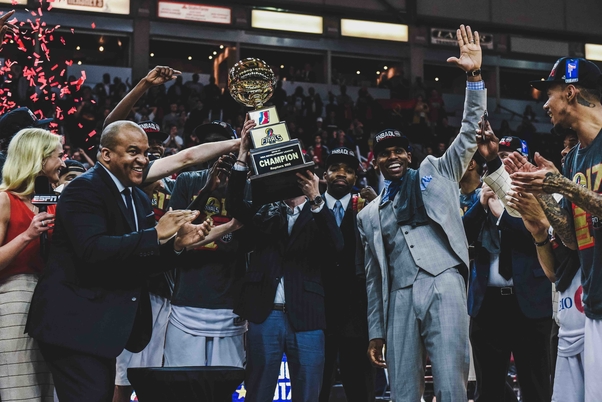 By Kajan ThiruthanikasalamApril 29, 2017No Comments

In the past two years, there have been many historic basketball moments for the city of Toronto. Last year, it was the Toronto Raptors, who made their first Eastern Conference Final in franchise history.

Behind monster performances from Bruno Caboclo and Fred VanVleet, the 905 won their first ever NBA D-League Championship, blowing out the Rio Grande Valley Vipers, 122-96. Caboclo led all scorers with 31 points, 11 rebounds, and a game high four blocks while VanVleet had 28 points and 14 assists.

4,824 people attended the final game of the championship at the Hershey Centre as the 905 fans left thrilled after a dominant performance from their team.

In a year of firsts for the 905, it was also their first ever appearance in the playoffs and in the finals. The win capped off an historic year, in which the 905 led the league with a 39-11 record in the regular season.

905 head coach Jerry Stackhouse, who was named Coach of the Year, was proud of how far his team had come within a year.

“It’s a great feeling,” Stackhouse said. “I’m happy for these guys; they really worked their butts off (for this).”

Stackhouse has previously experienced success before with the Raptors organization, as he was an assistant coach in their run to the ECF last season.

When asked if he considers himself a good luck charm, Stackhouse said, “I might take some credit for some of that (eventually) but right now I’m a piece of the puzzle.”

VanVleet, who was designated on assignment from the Raptors, said these accomplishments speak volumes about the organization.

“It’s a testament to the organization, from top to bottom, the way the management is run,” VanVleet said.

Pascal Siakam was named Finals MVP as he finished the series averaging 23.0 ppg and 9.0 rpg on 54.9 per cent shooting. He finished Game 3 with 17 points.

“It feels great,” Siakam said post-game. “It shows that hard work pays off.”

Siakam and VanVleet both spoke highly of their head coach.

“A lot of people have respect for him,” Siakam said, referring to Stackhouse’s playing career. “He knows what it takes to get to that level.”

“He (Coach) came in with a plan and a culture,” VanVleet said. “Everybody trusted what he wanted to do and it paid off.”

Yanick Moreira finished with a double-double with 10 points and 11 rebounds while John Jordan provided the 905 with a spark off the bench with 12 points and six assists.

The 905 were locked in on both ends throughout this game in a wire-to-wire win. The team shot a scorching 58.8 per cent from the field and 50 per cent from behind the arc (12-24). The 905 also limited the Vipers, who led the D-League in the regular season with 120.1 points per game, to just 96 points overall on 42.9 per cent shooting from the field.

The swarming defense from the 905 frustrated both Darius Morris and Kyle Wiltjer from the Vipers. Morris had 16 points on 19 shots, with many of those points coming in garbage time. Wiltjer, meanwhile, was limited to only seven points on 3-14 shooting from the field.

Troy Williams (23 points) and Jarvis Threatt (21 points) led the scoring for Rio Grande in the loss.

Canadian Brady Heslip is all smiles

The 905 came out guns blazing as they scored the first eight points of the game. Eventually, they took their largest lead of the game at 12 (17-5). Caboclo started off hot, hitting his first four shots in that spurt.

A notable highlight in the quarter came when Siakam threw a lob to a cutting Caboclo for the thunderous jam that brought the 905 crowd to its feet.

Wiltjer then scored five straight points as the Vipers cut the lead to five (21-16). But consecutive triples from Jordan and Caboclo had the 905 extending their lead to nine, 27-18, after one quarter. Caboclo had 14 after the first quarter.

In the second quarter, the bench unit hit a rut offensively for the 905, with consecutive shot clock violations. However, VanVleet came in and calmed the 905 down, scoring 12 points in the quarter. He had 16 at the half.

Rio Grande would not go away, eventually tying the game at 48 after a three pointer from Williams. But a 9-1 run from the 905, mainly on pick and rolls, had them up 57-49 at the half.

The highlight of the night came when Jordan, the D-League Slam Dunk Champion, caught a lob in transition from VanVleet. The 905 survived a scare when Siakam rolled his ankle but he stayed in the game.

The third quarter was when the game got out of hand for the Vipers as the 905, once again, scored the first eight points to start the half, extending their lead to 16 (65-49) forcing a quick timeout from Rio Grande Valley.

Caboclo then continued his amazing play from the first half. In an incredible sequence, he hit a three, blocked Morris on the other end, dunked in transition, before hitting yet another triple on the next offensive possession.

“He (Bruno) was amazing,” VanVleet said in awe. “That’s what people envisioned of him and performances like tonight are why people are still high on him.”

“Me and my wife were having lunch and I’m like, ‘Bruno’s going to have a good game today,’” Stackhouse joked. “He had pep in his step at shoot around.”

In the final quarter, both coaches emptied their benches with the game no longer in doubt.

The ending of the game came with fireworks, as the Vipers did not take it kindly as Negus Webster-Chan shot a triple and Jordan went for a dunk, both plays with the clock winding down. Jordan was fouled hard and players from both teams had to be separated.

“We were caught in the moment and obviously their players were kind of frustrated,” Jordan said. “It’s no big deal.”

The fans enjoyed every minute of the game

In a touching moment, Stackhouse credited the championship to Nathan Smith, although he could not attend the game. Smith suffers from cystic fibrosis.

“I want to dedicate this championship to his whole family,” Stackhouse said. “We take so much for granted. Those people are our family.”

Before leaving, Stackhouse repeated his mantra, which has been said all season long.

Congratulations to the 905 on a historic run to the D-League Championship.

As a side note: The city of Toronto had another reason to celebrate as the Raptors won 92-89 in Game 6 of their first round matchup against the Milwaukee Bucks. It was the first time in franchise history that the Raptors won a series in which it did not take the maximum number of games.