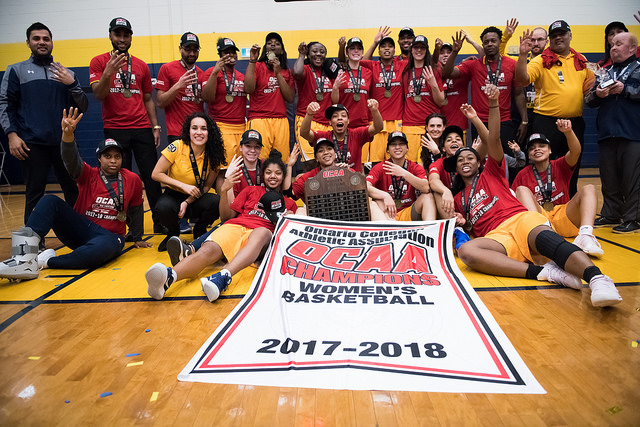 By Kajan ThiruthanikasalamMarch 8, 2018No Comments

It was more of a struggle to score for the top seeded Humber Hawks (20-0, 1st-OCAA West) in the gold medal game of the 2018 belairdirect OCAA Women’s Basketball Championships at Humber College. But that didn’t stop them from winning a fourth straight OCAA title.

Humber, in front of a sellout crowd, sent their fans home jubilated following a 69-54 win Sunday night at the Humber North Campus Gym over the Fanshawe Falcons (17-3- 2nd, OCAA West), using the strength of a dominant first quarter. The win also extends the Hawks’ record winning streak to 81 games.

“It never gets old and we think about it every day when we practice,” Hawks head coach Ajay Sharma said. “This is an extremely special moment when you get to climb the ladder and cut down the net with confetti falling (down). There’s nothing better.”

Aleena Domingo led four Hawks players in double figures with 17 points and a game high 14 rebounds and was named a Tournament All-Star; eight of her 17 came in the fourth quarter alone.

“Give it up to Ali Vlasman on Fanshawe (because) she really did a good job defending me but my teammates kept finding me,” Domingo said. “They still passed me the ball and trusted me to make those shots in the fourth quarter and I kept taking them. You gotta shoot your shot.”

Miea Campbell-Johnson was named Player of the Game for the Hawks after finishing with 13 points and a game high three blocks while Leticia Lopez scored 10 points and was also named a Tournament All-Star.

Ceejay Nofuente filled up the stat sheet, finishing three assists shy of a triple double (11 points, 13 rebounds, seven assists, three steals) and along with All-Star honours, was named Tournament MVP for the third year in a row. Nofuente put up big all-around numbers throughout the tournament, averaging 10.6 ppg,12.3 rpg, 7.6 apg, 5.6 spg, and 2.3 bpg.

Vlasman led all scorers with 20 points and 10 rebounds for the provincial silver medalists while Chuot Angou was named Fanshawe’s Player of the Game after finishing with 13 points on a perfect 7-7 from the charity stripe.

Mikhaila Wright finished with 10 points and three blocks in defeat as she and Vlasman rounded out the Tournament All-Stars.

Humber fed off of the energy from their raucous fans and burst out of the gates as they went on a 16-4 run to start off and behind two 10-0 runs in the quarter, led by 18 (26-8) after a quarter. Domingo had six points while Nofuente was on triple-double alert already, getting six points, six rebounds, and four assists in the quarter alone.

Both offenses, however, stalled in the second quarter as they only managed to score just 13 points each with Humber shooting 20 per cent and Fanshawe shooting 17.6 per cent. The Hawks went into the break, up 39-21, as Vlasman (12) and Nofuente (10) were the only players in double figures at the half.

It looked like the Hawks would go on their usual third quarter onslaught to put the game away as Humber scored the first five points of the quarter to take their largest lead of the game at 23 points after Jahnae Gyles hit a triple and a jumper from Campbell-Johnson.

But Fanshawe had other ideas, closing out the quarter on a 19-8 run, as the Falcons finally got their offense going, shooting 50 per cent from the field (7-14), on the strength of Angou’s seven third quarter points. Meanwhile, Humber continued to struggle offensively, shooting just 21.1 per cent from the field in the quarter as Fanshawe cut the lead to 52-40, heading into the final quarter.

“Coming out of halftime, I felt like we lost our energy,” Sharma said. “Maybe we were tired.”

Wright had a glorious opportunity for the Falcons to cut the lead to single digits to start off the fourth quarter with a wide open triple but couldn’t capitalize. Humber took advantage, scoring 11 straight points to take a 63-40 lead and held Fanshawe scoreless until a jumper from Vlasman finally ended the Falcons’ scoring drought.

“It was huge,” Sharma said about shutting the Falcons’ offense down. “We substituted some people in and the pace came back to us. We needed to stop them and rebound and it was over. And they did it.”

“Whoever was on-ball, off-ball, or in help, we were all, as a team, in the right spot at the right time,” Domingo said.

The Falcons scored the last eight points of the game to make the final score respectable but at the end of the day, Humber was not going to be denied on their home court as they stormed the court and the Hawks coaching staff were doused with ice.

“All of them weren’t expecting it,” Nofuente said with a mischievous smile.

“I think playoff basketball is like this. Your points per game drop and it becomes a defensive battle,” Sharma said. “We jumped out early and guarded them.”

Three point shooting hurt the Falcons as they shot a paltry 13.3 per cent (2-15). And although Humber didn’t shoot much better from three, hitting 20 per cent, they did outscore Fanshawe, 15-6, in that category.

However, the Falcons used their excellent free throw shooting (12-13; 92.3 per cent) to keep the deficit reasonable.

For Domingo and Nofuente, the gold medal game marked their final OCAA games as members of the Humber Hawks. It was fitting that they won the provincial title in front of their fans at the Humber North Campus Gym.

“It’s incredible. Being here for five years, after tearing (both of our) ACLs (and winning) four championships,” Nofuente said. “It couldn’t have ended any better.”

“To end it off on our home court in our last years, it doesn’t seem real,” Domingo said.

It has been a career season for the fifth year forward from Toronto, Ont., as Domingo averaged 16.4 ppg and 10.3 rpg (both career highs) with a field goal percentage of 53 per cent and was named an OCAA West First Team All-Star for the first time.

“When I first came here, I would say I only had athleticism,” Domingo said when speaking about her improvement as a player at Humber. “I want to give a special shoutout to Coach Kern (Lewis); he took the time to train me every day (with) new moves, new shots, new everything. Just a new perspective on basketball and he made me a better player two years after I tore my ACL.”

Meanwhile, for Nofuente, tonight caps off a five year OCAA career in which she has earned numerous accolades, including three time CCAA All-Canadian and OCAA Player of the Year along with back to back CCAA Player of the Year honours. She finishes her OCAA career with an 89-0 record and had her jersey retired just before the Hawks’ final home regular season game on Feb. 17th.

“For me, it was basically chemistry, learning who your players are, knowing what their strengths and weaknesses are, and using that to (the best of) their and your abilities,” Nofuente said about her improvement as a Hawk.

“Shoutout to my team. I couldn’t be here without them, just giving me that stat line and trusting me with the ball,” Nofuente said, reminiscing. “Rebounding, assists, steals, everything; (I’m) just trying to be an all-around player and get my team involved.”

Sharma says that having Domingo and Nofuente as leaders of a Hawks dynasty have been a blessing, given that Aleena has improved her game every year and that Ceejay played for Team Canada at the World University Games last summer in Taipei.

“Ceejay came in pretty polished and was a pretty good player. We added some things to her game, we gave her the keys to the car, and she’s led us for five years,” Sharma said. “Aleena came in and really got better every single year and she was doing whatever she wanted when she wanted tonight.”

“Both of them are once-in-a-lifetime players in our program (that) we’ll never see again,” Sharma said. They’re unbelievable.”

WHAT’S NEXT FOR HUMBER

As jubilating as this was for the Hawks to win another OCAA title, there is a bigger goal for them in mind as they head to Mount Allison University from March 15th-17th in New Brunswick to play in the CCAA Championships for a chance to win a national title.

“We’re looking at it as a three game tournament; we’re going to look at our opponent, dissect them and prepare,” Sharma said. “But really you win by the things that you do everyday so we’re going to go there and be us.”

Domingo says that the little things will be crucial for Humber to win their second ever CCAA title.

“It’s really easy to fall out of habit when you’re tired and forget all the small details that (coach) Ajay and the rest of the coaches have told us to do from the beginning of the year,” Domingo said. “And (they) keep stressing that those little details are going to give us whatever we want. Those details are key and I think that’s what’s going to make a difference.”

It remains to be seen who they play in the quarterfinals but the Hawks head into nationals as not only the top ranked team in the OCAA but also in the CCAA.