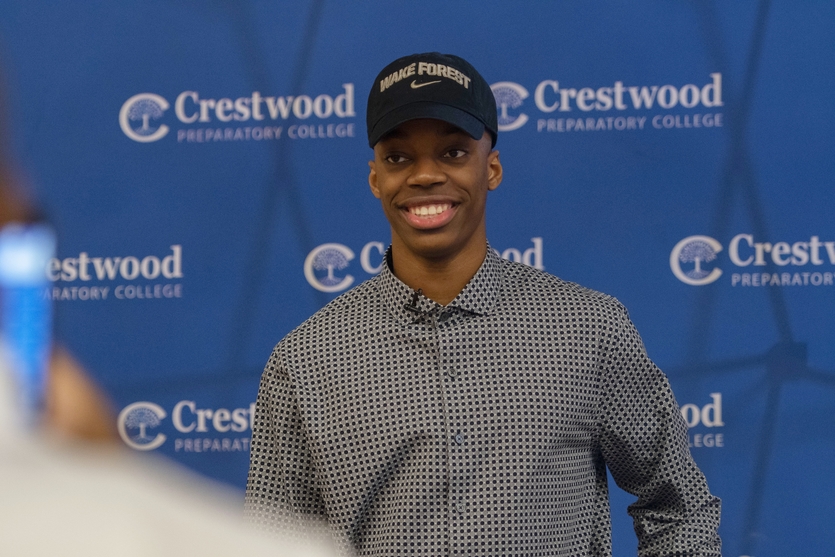 Jahcobi Neath: The Decision and What it Means for Canadian Prep Hoops

By Kajan ThiruthanikasalamDecember 23, 2018No Comments

Home » On Point Blog » Jahcobi Neath: The Decision and What it Means for Canadian Prep Hoops

(Toronto, On) As the clock was ticking down on Jahcobi Neath’s decision to commit to an NCAA college, the first thing that came to mind was the atmosphere surrounding the event as the entire school came to watch.

“It was a very great feeling seeing my classmates and peers in front of me and being a motivation to the kids in this school that are also here from basketball,” Neath said of the support from the crowd.

In front of all the school to see at Crestwood Preparatory College, Neath announced that he would be taking his talents to Wake Forest University as a member of the Demon Deacons.

“It’s a very surreal moment. You dream of doing something like this from the time you start playing the game of basketball,” Neath said. “That’s a goal that I get to cross off my list, committing to a high major basketball program.”

What decided it for him was the setting of a small school with a population of around 5,000 students and given that both Wake Forest and Crestwood are similar in terms of being private schools, the decision was a no-brainer.

“I feel like the ACC speaks a lot for itself; it’s the best conference in college basketball,” Neath said. “It’s pretty hard to say no to a school like that and they’re a private school. I feel like I do well in a private setting. It was the best fit for me overall.”

“When the head coach flew to Toronto to Crestwood just to meet with Jahcobi, that’s when you knew it got serious,” Ro Russell, Crestwood senior boys basketball head coach said. “They made a trip just to go and show him love and educate him; they had a big presentation and talked to him for a few hours about their program in its entirety. And that made a big impression on all of us.”

Russell has gone through this recruitment process before for many athletes, so, according to him, this is nothing new.

“We’ve been doing this thing since the seventh grade. He listened, worked hard, put in the work and now, this is what you get rewarded with,” Russell said. “I’m super proud of him for being able to get to this point in his career.”

“Coach (Russell) has meant a lot to me. He’s done this in the past with plenty of other kids and I’m just grateful to be another one down the line,” Neath said of his relationship with his head coach. “He’s definitely somebody I feel like I can trust in this whole process. I really put a lot of it into his hands and he helped me a lot throughout to make the right decision.”

RJ Barrett, from Duke University, might be the headlining Canadian in the NCAA currently but guys like Luguentz Dort (Arizona State), Ignas Brazdeikis (Michigan), Nickeil Alexander-Walker (Virginia Tech) and Simi Shittu (Vanderbilt) have generated first round interest for the 2019 NBA Draft, showcasing that the Canadian pool of talent is far more than just one player.

“It goes to show that Canadians do have talent and they’re not soft, like some people might think; it’s just good for the culture of Canadian basketball,” Neath said of the change of stereotype. “So seeing those guys at the NCAA level doing their thing is just really good for all Canadians.”

But it lies deeper for Russell, as his program with Crestwood Preparatory College has sparked even interest from athletes south of the border, noting that guys like Luis Pacheco Jr. (New York) is playing basketball at Crestwood.

“We’re bringing in American guys to Canada; forget about Canadian guys to America. We do it as good, if not better than a lot of the programs down south,” Russell said. ‘So that’s the message that we’re sending.”

Russell started the first prep school program in Canada 15 years ago and his vision of having a coach that is dedicated with the right infrastructure along with the connections is finally coming to fruition at Crestwood as they recently hosted the Universal Hoops Prep Jamboree in which scouts from south of the border attended back in September.

Neath hasn’t decided what program to take but he is currently deciding between business and sport marketing. If there’s one thing that won’t change for him, however, it will be his dedication on and off the court.

“When you’re in college, you’re preparing yourself for the real world to get a job outside of basketball because it’s (the sport is) not going to last forever,” Neath said. “So when that time comes, I feel like being at Wake Forest, with the great program that they have and the alumni that they have, really sets myself up to have a good career otherwise.”

“I expect him to be consistent and continue growing. He has great character; his family really grew him up in the right way,” Russell said. “Great kid, family-first, loyal; he’s full of intangibles. I expect him not to change and keep being the same great kid from when I’ve had him in the seventh grade.”

Neath is another example that Canadian ballers can stay in Canada and still fulfill their dreams of an NCAA Division I basketball scholarship.

Neath is currently averaging 26.6 ppg and 6.2 apg for the Lions; he is ranked second in the National Preparatory Association (NPA) in both of those categories. The six-foot-four point guard looks to lead Crestwood, who is currently ranked first in the Central Division with a 7-2 record, to an NPA title and end his high school career off in style.