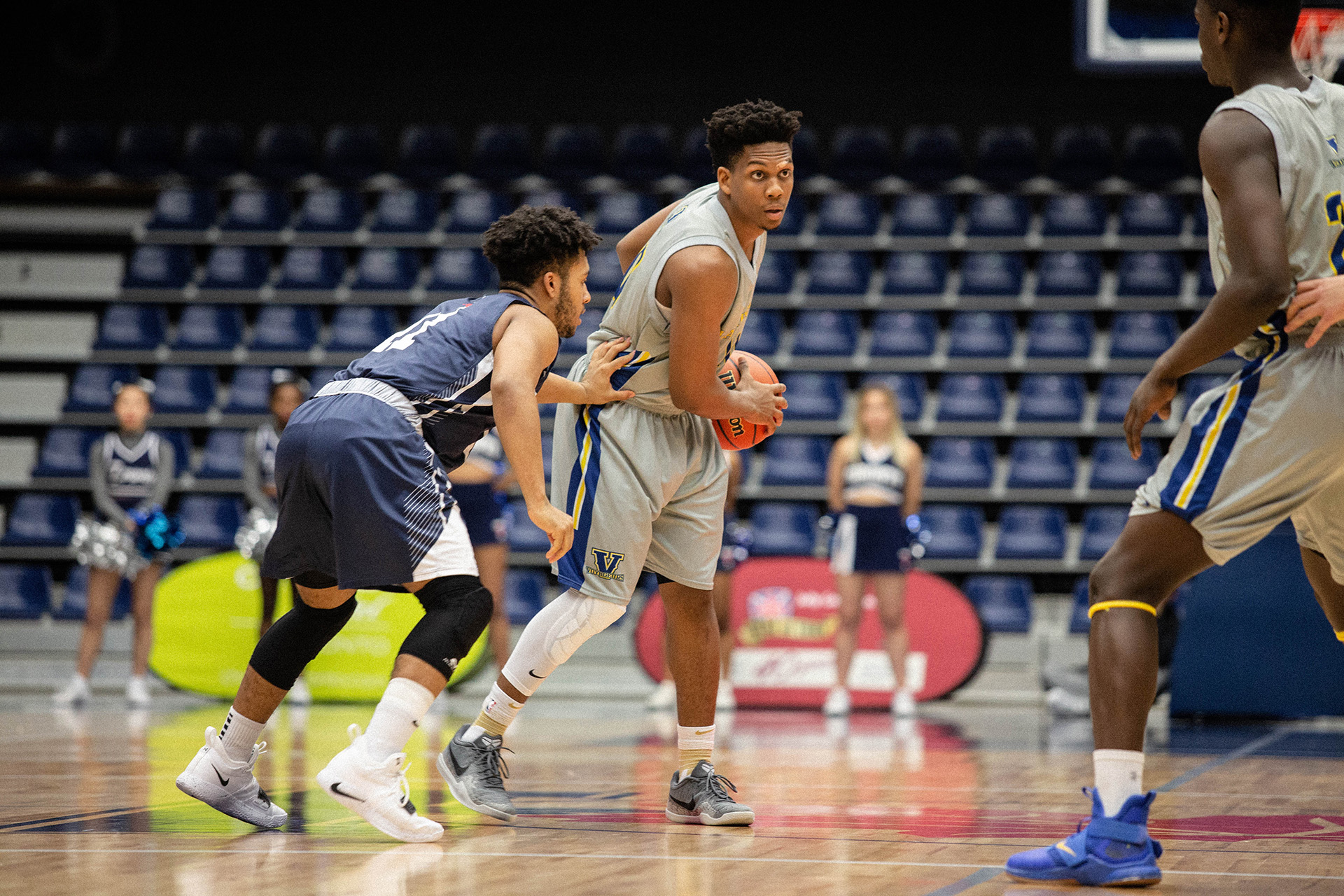 When the Canadian Senior Men’s National team lands in China this upcoming August to compete in the FIBA Basketball World Cup 2019, one U Sports student-athlete in particular will be savouring the moment knowing he contributed to a key milestone in the national program’s history.

Kadre Gray, a third-year Health Promotion major at Laurentian University and a reigning U Sports Athlete of the Year award recipient, competed for Team Canada in the fifth window of the FIBA World Cup 2019 Qualifiers this past November 30th against Venezuela in Caracas, and then December 3rd in Sao Paulo versus Brazil.

Gray had only been in Waterloo days prior to getting the call to join the national team, as the Laurentian Voyageurs fell to the Waterloo Warriors despite a 29-point performance from the 6-foot-1 Toronto-native.

“It was quite a crazy moment,” Gray told On Point during a weekend trip to Toronto in January, when the Voyageurs took on the Ryerson Rams and Toronto Varsity Blues. “Because we’re in the middle of a week and we’re trying to prepare for our weekend game. So I got that call, I was like, ‘oh, we gotta get packed, and we gotta go.’”

Gray became the first active U Sports athlete to participate in the current FIBA World Cup Qualifiers, an opportunity afforded by FIBA’s newly-implemented qualification process that divides qualifying games into two-game windows throughout the course of 15 months. And with certain periods taking place during the NBA and Euroleague seasons, national team veterans such as Kelly Olynyk, Cory Joseph and Tristan Thompson have been held back from participating year-round, allowing more Canadian athletes to contribute in Canada’s push towards Tokyo 2020.

To further Gray’s unique scenario, his opportunity came when Canadian guard Xavier Rathan-Mayes suffered an injury only days before Canada was set to compete in its first matchup on November 30th, leaving the coaching staff with little time to fill an open role.

“Very short process,” head coach Roy Rana described to On Point. “Obviously, competed against Kadre and watched him since he was a high school player. And it was pretty clear to me if we needed a guard in the country that could get to us pretty quickly that he was the guy in our level that was the most intriguing.”

Among a lineup that included veterans such as Joel Anthony, Brady Heslip and Kyle Wiltjer, Gray’s number was called late in the first half against Venezuela with 3:37 left in the second quarter as Canada trailed 32-28.

On a Venezuelan possession moments later, 32 year-old guard Heissler Guillent dribbled the basketball off of his leg and Gray was able to collect the ball, breaking into the open court. With a defender trailing Gray, he was able to make a pass behind to Anthony who finished the fast break with a thunderous dunk, causing Venezuela to take a time out.

“You know what, I wanted to kind of get a look at him,” Rana said of Gray’s first minutes on the floor, “and get a chance, you know, we brought him out here I wanted to see if he could make some kind of an impact and for his first kind of shift as a senior national team player, it was a nice moment for him.”

Gray was the only active U Sports athlete on the roster, but he was hardly alone in counting the alumni presence of Aaron Best (Ryerson), Kaza Kajami-Keane (Carleton), Conor Morgan (UBC), and Phil and Thomas Scrubb (Carleton).

During the week spent with Team Canada, Gray recalled his U Sports counterparts’ work ethic and focus, and a professional demeanor that he spent a lot of time observing as he continues to prepare himself to be in those same positions one day.

“We had great talks throughout the week and just asking them questions about how their life is and kind of that next level kind of talk,” Gray recalled. “For me I was just trying to learn the whole week, it was crazy. I just tried to learn and just tried to take in every single thing so I can become a better basketball player but also a better man.”

As much as Gray is able relish his Team Canada experience, it’s without a doubt that he has maintained a high-level of focus on Laurentian basketball and the team’s push towards the playoffs over the final stretch of the season (at the time of this writing, the Voyageurs are currently fourth in OUA East standings and are on a three-game winning streak).

“Just an amazing feeling to be selected and given the opportunity to represent your country,” Gray said. “It’s a huge thing. While I was there I was just trying to learn and just try to pick up on every single thing and bring it back to my team and try to make us better.”

Trung Ho is a freelance basketball writer, covering U Sports, Raptors 905 and Canada Basketball. You can follow him on Twitter @trungho.