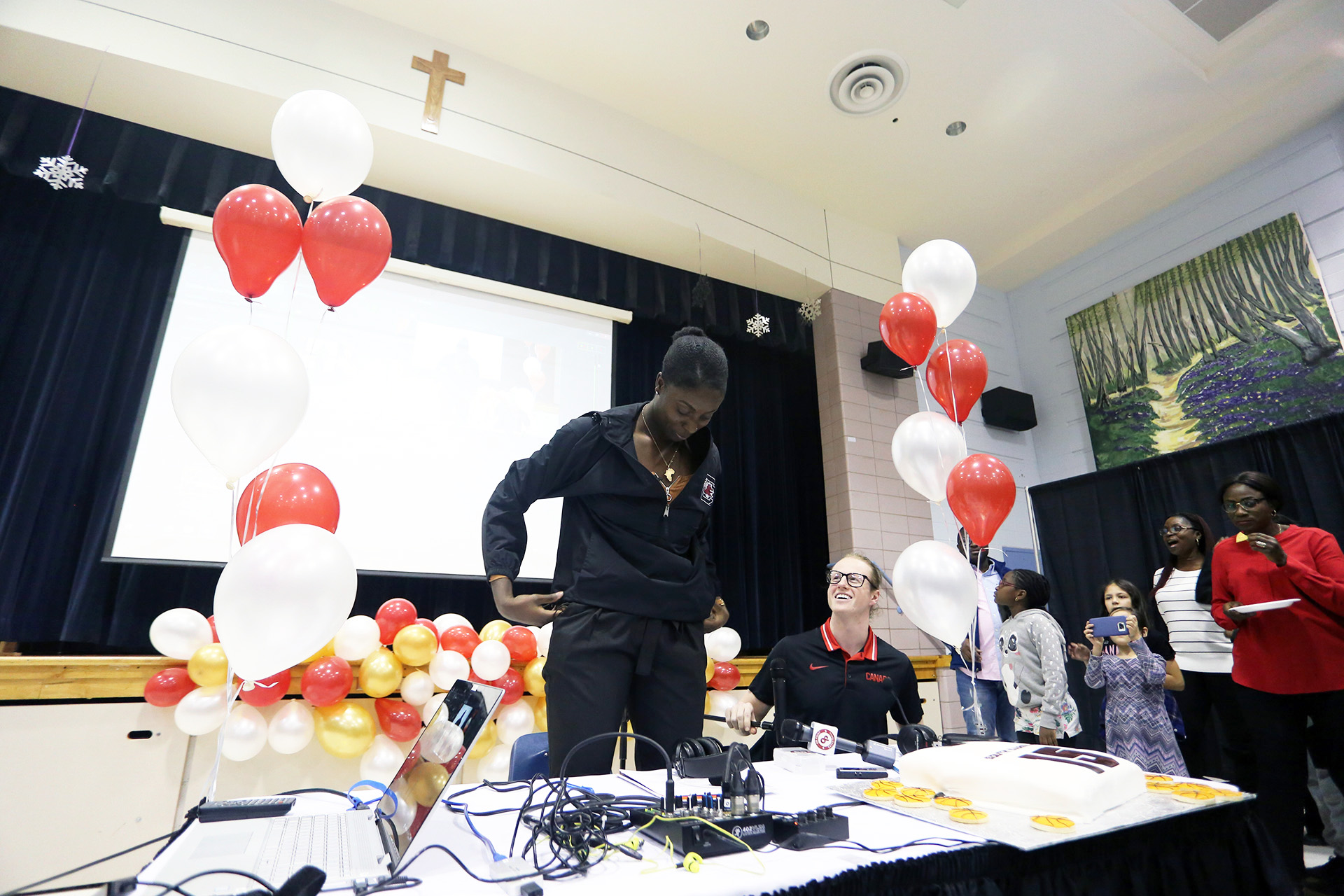 On the evening of Laeticia Amihere’s college school announcement event, about 100 friends and family members gather inside an event hall of École secondaire Sainte-Famille in Mississauga, Ontario.

The 6-foot-3 Canadian high school basketball star, who is ranked 10th in the 2019 HoopGurlz Recruiting Rankings by espnW, is making her way around the room about 10 minutes past the scheduled broadcast time, for the most part unaccompanied. You can mistake her for checking her phone like any teenager would at one point, but she is in fact replying to tweets about a livestream that is having technical difficulties, performing part-troubleshooting and part-public relations duties.

Going into Amihere’s announcement on Wednesday night, the list of schools had been narrowed down to Kentucky, Louisville and South Carolina. And with the opportunity to win an NCAA National Championship topping the priority list, Amihere announced her decision to sign with South Carolina, becoming the third top-15 recruited player to join Gamecock Nation for the 2019-20 season.

“It really came down to my values, what was the most important for me,” Amihere said in her address to the crowd moments before her announcement. “Just making sure that it was a winning culture – I want to win a championship, just feeling that relationship with the coaches.”

And it was indeed the relationship with, and the accolades, of South Carolina Head Coach Dawn Staley that ultimately won over the commitment of Amihere for the next four years.

While Staley’s accomplishments as a player runs well beyond her three Olympic gold medals and six WNBA All-Star honours, her effect as a coach in her 11th season with the Gamecocks have been nothing short of establishing a perennial powerhouse in the Southeastern Conference (SEC). Having won the NCAA Division I Tournament in 2017, South Carolina has churned out five WNBA players (all top-ten draft picks) in the past three seasons alone, including most recently Las Vegas Aces forward and 2018 Rookie of the Year A’ja Wilson.

“In my meeting with [Staley] on my visit, she said, ‘I know what we can do for you, but what are you going to do for us?’ Amihere told On Point. “So just her way of thinking, she challenges me. I’ve never received a question like that.”

As Amihere has cemented herself as one of the future stars of Canadian basketball, it is the next challenge that she is now after which in truth is simply to continue being challenged. Amihere hopes much of that will come at the hands of Staley, who the young basketball phenom sees as someone who can help her grow both as a person and a basketball player.

And on the court? “I’m definitely going to be a better player,” said Amihere, “and you see what she did with A’ja Wilson, she’s become such an all-around player and I think that’s what I’m most excited for.”

It was only a little over one year ago, that Amihere suffered an ACL tear in her left knee while attempting a layup during a game for King’s Christian, her high school team based in Oakville, Ontario. While she initially received notoriety after a video of her dunking in a game that went viral, and subsequently for her performance on Canada’s U19 Women’s National Team in 2017 at the age of 16, her ranking on espnW dipped from number two to 10 following the injury and has since only been cleared to play basketball again about two months ago. This year-long process has made the 17-year-old value unique aspects in her recruitment that a sought-after young prospect may not typically consider.

“Just being able to tell if people are going to be with you through thick and thin, and I think that’s the most important thing,” said Amihere. “Every single day leading up to my surgery, there was questions about how I’m doing. [Staley] would check up on me after my surgery, she was the first one to text me, just showing her support and being there even during my tough times.”

At only 17 years-old, it is Amihere’s well-noted level of maturity that has also already led her to develop a mindset for inspiring young female basketball players in Canada, which is the reason why she decided to hold her announcement event at École secondaire Sainte-Famille, where she attended as a grade 7 and 8 student.

“I think it’s important because when I was young, when I just first started playing basketball, I didn’t have a lot of people to look up to,” Amihere said. “And that’s not to say that Natalie Achonwa and Kia Nurse wasn’t there, but in my environment, the French community and these parts of the city, there’s not a lot of players that play professionally or stuff like that.”

Added Amihere, “Just to show people after all the hard work, dedication, where you can get. So I think inspiring young ladies and inspiring people that are less fortunate is really important, and that’s my goal, I just want to inspire a lot of young girls.”

After posing for photos and taking in congratulatory sentiments, the evening begins to wrap up and Amihere makes her way around the room one last time, and again, much on her own. This time it’s to make sure she hasn’t missed any members of the media who were hoping to ask the newly South Carolina-commit about her next journey.