MISSISSAUGA – Following a disappointing defensive effort against Rio Grande Valley on Sunday that saw the Raptors 905 concede 50.6 per cent shooting from the floor and cough up 18 turnovers, the home team was able to bounce back and take Game 2 of the best-of-three matchup against the Vipers, coming away with the 95-85 win on Tuesday and evening up the series at one apiece.

EJ Singler’s timely long ball late in the fourth quarter and a thunderous reverse jam by Bruno Caboclo that followed would help seal the victory for the 905 and inch the club one step closer to the franchise’s first-ever championship.

Pascal Siakam poured in a game-high 32 points to go along with 10 rebounds and five steals in 44 minutes of action, while Fred VanVleet chipped in with an all-around performance, recording 16 points, seven rebounds and nine assists. Singler finished with 15 points (3-for-6 from deep).

Brady Heslip didn’t lead his team in scoring, something he’s often done over the course of the season, but he knocked down three key triples on the way to his 11-point night.

The 905 have had a relatively tranquil journey to the NBA D-League finals in just its second season, but following an unusual 119-106 loss to the Vipers in Game 1, it was important for head coach Jerry Stackhouse to smoothen out the rough edges before Tuesday’s matchup, particularly against a high-octane offence like Rio’s.

“It’s a tough team, man, they’re a tough team to play,” said Stackhouse of the Vipers, who are making their fourth finals appearance in eight years. “They do a lot of things to put you in a bind defensively, but I thought for the most part we continued to fight, continued to work and grind the game.”

During the regular season, the 905 led the NBA D-League in opponent’s points-per game at 99.6, the only team in the league to hold opponents below 100 points. And they held true to their guard-first identity in Game 2, limiting the Vipers to 41.5 per cent shooting and capitalizing on 20 Rio Grande Valley miscues with 27 points.

“Defensively we were good,” he said. “You look down at the stat sheet and (you see that) we held this team to 41 per cent shooting and 85 points. This is a team that averages somewhere close to 120. They put up big numbers in this league, so to put that type of number on them is big.”

An example of that defence occurred midway through the opening frame when Bruno Caboclo, a defensive stalwart as of late, utilized his 7-foot-6 wingspan to send away Chinanu Onuako’s line drive to the basket (one of four blocks), igniting roars from the 3,359 in attendance at the Hershey Centre.

On the offensive end, the 905 didn’t shoot particularly well from the floor, just 43.8 per cent to be exact, but there were several instances where scoring came seamlessly, specifically in the first half when VanVleet and Siakam made good on a series of transition plays, leading to a 17-5 fast-break point differential. The pair combined for 29 points and consistently invigorated the arena with multiple high-energy plays throughout the game. VanVleet often spearheaded transition plays against the back-pedaling Rio defence before either bursting to the hoop for a semi-contested lay up or finding Siakam for an easy flush.

“(VanVleet brings) toughness and (the ability to) defend, “said Siakam, who had a plus-minus of 15 in the win.

“He’s a playmaker so it helps me out there on the floor having a guy that can find shooters, guys like Brady, E.J., find guys that can roll to the basket like myself,” he said. “It definitely helps to have a guy like him that can control the tempo.”

The 6-foot-9 Siakam was impressive from start to finish, notching 20 first-half points and causing several mismatches in the open court. While his jump shooting continues to be a work in progress — he’s already made strides from the 10-15-foot range this season and is working to eventually extend his scope to the three-point line—Siakam’s eternal cauldron of energy makes guarding him a laborious task, and it’s something he continues to use to his advantage each game.

The big man logged 44 meaningful minutes in Game 2 and had an impressive stat line to show for it. Having the opportunity to play in the D-League has certainly benefited Siakam, especially when minutes on the big stage come sparingly.

“It helps me a lot, just getting reps,” he said. “(I) don’t play a lot with the (Toronto) Raptors and whenever you come down here and you can get like 40-something minutes. It definitely helps.”

The 905 persistently carved up the Vipers inside throughout the game, winning the points-in-the-paint battle 50-38 and making a conscious effort to play inside-out. Rio, conversely, relied heavily on the three-point line to spur their offence, shooting just 10-for-37 on the night from deep, but shrewdly audibled once their three-point scoring ran dry.

The Vipers made a late rally to tie things up at the 4:38 mark of the fourth quarter after a Darius Morris three pointer, but the 905 quickly responded with a pair of baskets of their own from Singler and Caboclo, helping trigger a game-ending 12-3 run to put away Rio.

Former Gonzaga Bulldogs’ standout Kyle Wiltjer led the Vipers in the scoring column, tallying 25 points and 12 rebounds while connecting on five three pointers in just over 40 minutes. Although Wiltjer struggles defensively and is certainly not one of the more athletic players around, his offensive prowess is hard to ignore.

“Wiltjer was big time tonight, he (doesn’t have) the quickest of feet but he gets to his spots and whenever he does he’s a big-time shooter,” said Stackhouse. “I’d say Brady’s the best shooter in the world, (but Wiltjer’s) got to be in the top five too. I think he’s going to have an opportunity to really showcase who he is very soon.”

The 905 will square off against the Vipers Thursday evening at the Hershey Centre for Game 3 to determine the 2016-17 NBA D-League Champions.

Notes: Toronto Raptors players DeMar DeRozan, PJ Tucker, Jakob Poeltl, and Bebe were in attendance for Game two of the finals… Negus Webster-Chan was available to play for the first time in the playoffs since experiencing concussions-like symptoms…905 shot 30.8 per cent from three (8-for-26)…Vipers’ point guard Isaiah Taylor left three minutes into the game because of an apparent ankle injury and didn’t return, his status for Game three is unknown. 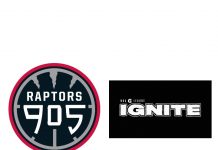 Ignite fizzle out in G League quarter-final loss to 905 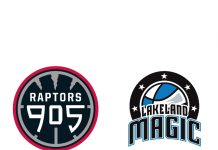 Raptors 905 down Lakeland in magical end of season run

Tyler Ennis speaks to On Point about 2014 NBA Draft 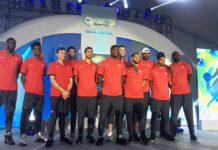 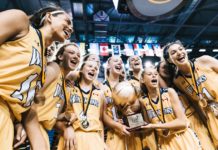