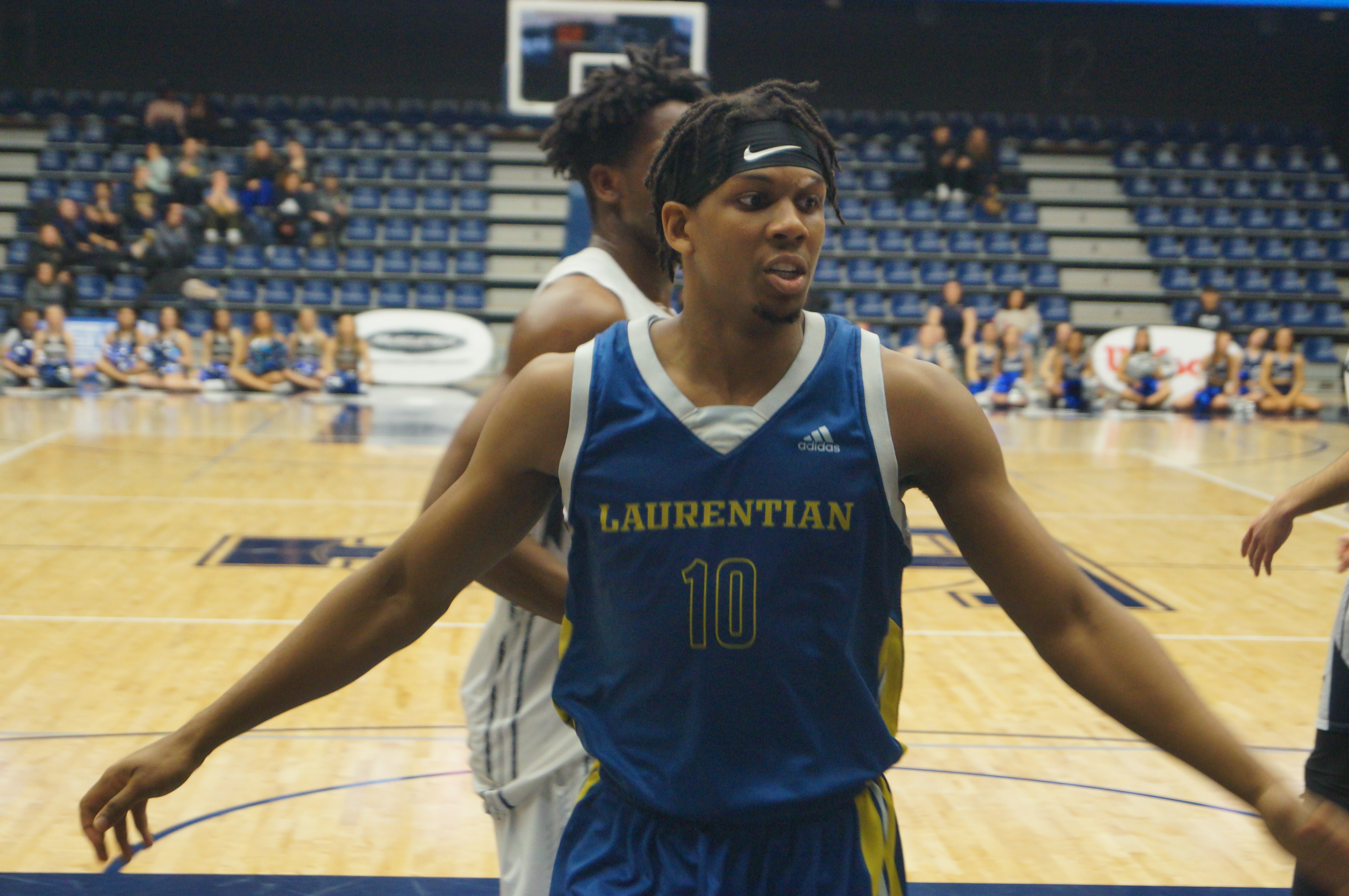 By Berkeley MosesFebruary 18, 2020No Comments

(Toronto, ON) The Laurentian Voyageurs came out victorious in the first of a set of weekend back-to-back games in Toronto. The Voyageurs, lead by Kadre Gray’s twenty three points and 9 rebounds were able to out pace the U of T Varsity Blues 96-78. Gray commented after the game “We had a game plan to focus on Evan (Shadkami), we didn’t want him getting too many comfortable looks out there , we were able to contain him, rebound and run the floor, It was a lot of fun out there.”

On the Varsity Blues side it was one of the last games for fifth year Vaughan native, Chris Barrett. Barrett, who attended Vaughan Secondary School averaged 11 points per game this year with 4 assists while shooting 37% from the three-point line,  “I’m nothing but grateful for my time at U of T. I appreciate everything that they’ve given me here, it’s been a great five year journey-you win some games and lose games but overall it’s been a great experience.” Barrett also shared comments about his plans for the future, “I would love to get into training afterwards, with my stature I’ve had to work a lot at the mental parts of the game. I’ve started doing some things already and I feel I have a lot to share with the kids out here and develop the future of Canadian basketball.”

The game started off with a tough defensive pace, and the Blues were able to force six first quarter turnovers and convert 4/6 three pointers to finish the opening frame in a 19-19 tie against the favored Voyageurs. The Blues would struggle from the field in the second quarter, missing all four of their three-point attempts and going 4/12 overall, scoring only 15 points in the quarter. The Voyageurs stretched their lead in the second quarter with the hot hand of Curtis Gordon, a third year player out of Guelph, who hit three momentum shifting three point shot going down the closing stretch of the first half. The Voyageurs would close the half up 47-34 lead by Gray’s 11 points and Gordon’s nine.  The third frame got out of hand with Gray demonstrating why he is one of the favored candidates to win the U Sports Basketball Player of the Year, which would be his third such accolade. The fourth year guard, who declared for the NBA draft last year, has really left a mark on OUA Sports and Canadian Basketball.

“The whole process with the draft last year was a blessing for me,“ said Gray, “ To see for myself what it takes to play at the professional level was eye opening. It gave me a chance to get back in the lab and keep working on my game.”

A product of Oakwood Collegiate in Toronto, Gray has also represented Canada on a national level at last year’s Napoli 2019 Summer Universiade Tournament in Italy and was coached by Wildred Laurier’s Justin Serresse along with U of T coach John Campbell.

As Laurentian stretched the lead in the third quarter you could hear the energy from the Sudbury faithful in the crowd.

“I think we have the best fans in U Sports,” said Gray.“ I love that they travel, my family and friends come to whatever games they can to support, it really means a lot.”

Laurentian finished the quarter with a 70-44 lead, which was a tough deficit for the Blues to come back from. Blues guard Shadkami commented after the game “It’s been a tough year overall, we need to be more consistent with the effort, throughout the year we’ve had a few close games against good teams slip away. I’m committed to doing everything I can to get us over the hump.” Shadkami continued, “I see a lot of talent when I look around this locker room, I’m excited to see what can happen once we start gelling.”

The Blues would outscore the Voyageurs 30-23 in the fourth, however it would be too little too late as the damage had already been done. The Voyageurs move on to face a hot Ryerson Rams team with the winner guaranteed a bye week for the first round of the OUA playoffs.

Written by Berkely Moses. Check out Berkeley on Twitter.