On Point Basketball (Made Pro Am): Game 1 Recap

The game continued its quick pace when it resumed.  Flen Whitfield, a true high flyer brought the house down with a sick reverse self alley-oop jam.  The Health Institute retained a one point lead, 78-77 after three quarters.  Later, as Johnson cut through the lane for an easy dunk it became clear that not much defense was being played.  It was an entertaining, high scoring game nonetheless.  The Health Institute’s Evan Pellerin was able to get deep post position throughout the contest and owned the paint.  The Health Institute led 95-89 with four minutes to go but Flash Forward went on a 7-1 run to tie to game at 96. Olu Ashaolu then broke the stalemate and appeared to get away with basket interference, with a tip in.  Tut Ruach put Flash Forward back in the lead with a three pointer, then Pellerin answered back with a long ball of his own for The Health Institute. Then it was Johnson again as he hit a midrange jumper for what proved to be the winning margin as The Health Institute weren’t able to get off a shot attempt in the dying seconds.

Tut Ruach led a balanced Flash Forward offense while adding 10 points and 6 assists in a leadership role. Kyle Johnson poured in 22 points and Tyrone Watson sand Flen Whitfield ach had 19.  Tyrell Vernon also dropped 14 points for Flash Forward. Theon Reefer was impressive while notching 21 points for The Health Institute. Ashton Smith scored 23 points to go with 9 assists and 4 rebounds in a losing effort. Evan Pellerin was a beast inside scoring 20 points while notching 7 rebounds and Olu Ashaolu was an all-round threat with 16 points 6 assists and 12 rebounds as well.

On Point Basketball (Made Pro Am): Game 2 Recap

This game got off to a bit of a staggered start, especially for First Commonwealth as Denham Brown and Junior Cadougan both missed on threes early on.  Conversely, Tyshwan Edmondson was the sparkplug in the opening minutes for On Point with a big dunk followed by a steal and an improvised layup.  On Point had the early advantage and seemed to take on the personality of their intense Head Coach and former NCAA standout and professional basketball player Gary Durrant.  After trailing 22-13, First Commonwealth used an impressive 14-6 run to pull within one.  Edmondson and Cadougan then exchanged threes as the game started to pick up some real flow.  On Point widened the gap again as they took a 39-33 halftime lead.  Edmondson led On Point with 15 points while Brent Jennings paced First Commonwealth with 12.

On Point seemed determined not to let First Commonwealth back in the game and Morgan Lewis started to take over in the second half.  First he threw down a two handed alley-oop slam and then he brought the crowd to its feet with a thunderous one handed crush in traffic. Lewis also hit a variety of fadeaways and connected on crucial three pointers.  For their part Cadougan and Jennings did their best to keep First Commonwealth close.  It was all for naught however as On Point were the better team throughout the bulk of the ball game. In the final minutes Lewis put the cherry on top of a great performance with a “showtime” reverse self alley-oop, worthy of any top dunk competition worldwide. Lewis led the way with a game-high 28 points, including 22 in the second half. Tyshwan Edmondson was solid again and chipped in with 24 for the victors.  Eric Kibi also balled out with 14 points and 18 rebounds while teammate Cavell Johnson was no slouch either with a double-double of 15 points and 15 rebounds. Brent Jennings led First Commonwealth with 27 points and 3 steals and Junior Cadougan scored 14 of his 21 points in the second half. He also collected 5 assists and 5 rebounds from the point guard position. Denham Brown was for good for 16 points and 10 rebounds, albeit in a losing cause.

On Point clinched a spot in the M.A.D.E. Pro Am Finals with the win.

Week 5 on Wednesday, July 16th is going to be exciting. In game 1, The Health Institute will look to get their first W of the 2014 campaign while M.A.D.E. Men want to finish .500 for the season and finish at 2-2 as they look forward to next summer. The winner of game 2 between First Commonwealth and Flash Forward, who are both 2-1 so far, will gave On Point for the 2nd M.A.D.E. Pro Am Championship which will take place on Wednesday July 23rd at 6:45pm. Look for some incredible basketball action for sure! 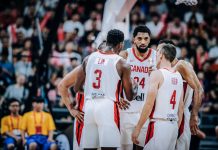 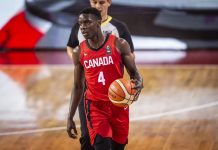 A’s overpower rival Power; Theo Davis on his way back up