The visiting (3-1) St. John Mill Rats made their way to the Hershey Centre this past Thursday as they looked to pilfer a win against a talented and competent (3-2) Mississauga Power club. Behind a stellar shooting performance from beyond the arc by Omar Strong– where we saw the 5’9” guard connect on a myriad of trifectas, eight to be specific, for a total of 28 points- the Power were able to pull off the 134-119 win. Veteran guard Tut Ruach – who governed the floor general duties all night with his savvy all around game – added 22 points to go along with six helpers while JauShay Rockett added 20 points as well as five rebounds and four assists for the hometown Power. Alex Johnson was also a significant factor in Mississauga’s win, as he put up 20 points to go along with eight assists. Anthony Anderson – a pit bull-like combo guard who possesses the quickness, strength and talent to score whenever he wants to on the floor – was impressive for the Mill Rats as he poured in 28 points to go along with six rebounds and six assists, while Kenny Jones chipped in with 22 points. The highly touted and endowed Aquille “Crime Stopper” Carr did his best to help out the men in blue with a solid 17-point contribution, despite foul trouble that took him out of the game early. Although both teams were phenomenal on the offensive side of things for much of the game, it was the Power’s 23 made three pointers that sealed the deal against a star studded Mill Rats club. Strong was unconscious from beyond the arc seemingly hitting on everything he threw up, including a couple of and-1 three point plays reminiscent of LA Clipper’s guard Jamal Crawford. Anytime a team has four players scoring 20 or more points in a single game– which is precisely what the Mississauga Power did in Thursday night’s showcase- the odds are usually in that team’s favour.

Mississauga fans got their first look at Baltimore native Aquille “Crime Stopper” Carr in Thursday’s win against the Mill Rats. The “crime stopper” connotation denotes or refers to the sky high crime rate in Baltimore, Maryland and Carr’s seamless ability (presence) to attract large herds of audiences to the gym (for when he played high school ball in Baltimore); as a result, less people were outside partaking in criminal activity and, instead, were indoors observing brilliance as the young star showcased his matchless talent on a game-to-game basis; hence, the “crime stopper” trademark. Tongue-in-cheek? Maybe. But the hysteria and overall hype that followed Carr throughout high school enabled him to garner an immense amount of attention and has subsequently led him to set up shop in an assortment of different places and countries, including where he is right now in Canada.

After being let go by the Delaware 87ers of the NBA Development league this past January – where Carr was drafted in the third round of the NBA D-league draft in 2013 – the 5’5” former Patterson High School standout signed a one year contract with the St. John Mill Rats.

So far the unyielding 20 year old is averaging just over 16ppg in about 26 minutes of action for the Mill Rats, but expect those numbers to increase as Carr gets more acclimated and familiarized with his teammates and coaching staff. As the games go by and the chemistry starts to brew, there’s no doubt that the Baltimore native will be atop the league in scoring – or at least in the top five – and, if the ship sails as smoothly as he deems, attract the same attention from south of the border and overseas that shadowed him throughout high school, it’s just a matter of him staying humble and continuing to work hard. But for now, Carr needs to remain focused on the season ahead and the lofty expectations set out by the Mill Rats organization.

In terms of Carr’s play on the court and his overall skill level relative to the players around him, there’s no doubt the he possesses top tier talent. His quickness with or without the ball is an issue for anyone who’s stuck guarding him (even for other small guards). His shot – although inconsistent – is something that can be mended and improved on through time and practice. His ball handling – once compared to Steve Nash by scouts and experts- and his crafty penetration ability, are few and far between, especially for a guy at his height; much of his ability to finish in traffic stems from his reported 48” vertical – an almost unfathomable number by any stretch of the imagination.

Aside from turning the ball over – which is a diminutive flaw in Carr’s floor game and something that can be easily corrected – his offensive game has minimal chinks to its armour. So long as he remains focused on the goal ahead and grounded throughout the experience, there’s no doubt that 5,5” phenom has a chance to exceed the high expectations set out on him by basketball curators worldwide.

Although Carr has a tremendous feel for the game on the offensive end of things, his tenuous frame and obvious deficiencies in the height department are two of his biggest demons, but there’s also another knock on Carr that needs to be completely overhauled: his attitude and disposition.

He carries himself with a sense of swag, an immeasurable level of confidence, and an unparalleled chip on his shoulder. All of these ingredients are conducive to any winning team’s philosophy, without a doubt, but it can also be a recipe for disaster, a damaging impact on team morale. If the game’s not going well for Carr and his teammates he has tendency to bicker at officials or display negative body language – a detriment to any team looking to grow as a cohesive unit. The same reputation followed Toronto Raptor’s famed point guard Kyle Lowry throughout his tenure in the NBA, but eventually over time (and through trial and error) that reputation faded. Lowry’s treasured by fans and respected by players across the league. The same path can be cultivated for Carr. So long as he continues to develop and undergoes the necessary (rite of passage) experiences to ultimately foster a grounded disposition, the sky’s the limit for the “crime stopper.”

He governs an aura that screams basketball superiority and ascendency. He has the tools and talent to surpass the bar confining him from his primary dream. He’s been put in a position to contribute to a developing organization in the Mill Rats. All things considered, Carr has a chance to be something special in the NBLC. His mental fruition is the only enigma in question – a question that only time and experience can sufficiently answer. 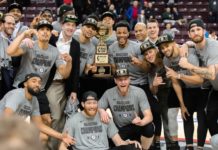 Raptors 905 fall to the Austin Spurs who capture their 2nd... 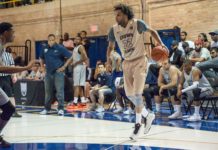