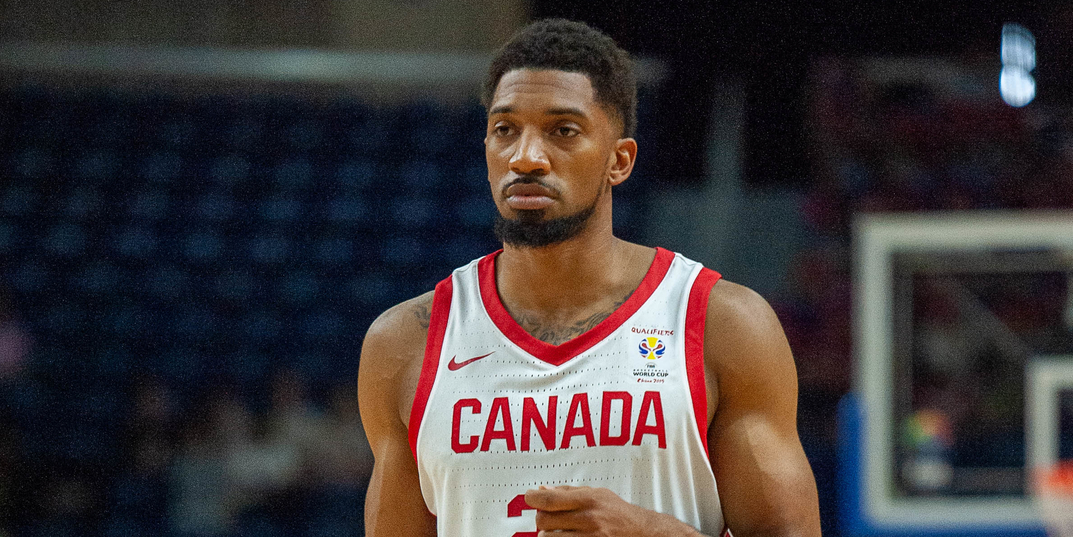 Exclusive to On Point Basketball by Olivier Neven

As the final buzzer sounded at Amalie Arena in Tampa on April 18, three players converged at centre court, warmly embracing and sharing laughs. Chris Boucher and Khem Birch of the Toronto Raptors, and Luguentz Dort of the Oklahoma City Thunder, had just duked it out in the first NBA game in history to feature three starters from Montreal.

Boucher had 31 points, Dort went off for 29 while Birch’s steady seven points and six rebounds paved the way for a Raptors win. This special night for Montreal basketball served as a showcase of the talent coming out of Quebec and celebrated Canada’s growing influence on the game’s biggest stage.

Dort is now an important player for the Thunder and one of the premier defenders in a league that’s moving further and further away from staunch defence. Since his breakout display in the bubble in Orlando, almost single-handedly winning a Game 7 and shutting down James Harden, Dort has locked down more of the league’s best scorers.

“First off, gotta give him credit, man. He’s a hell of a defender,” Donovan Mitchell said of Dort after being held to 8-of-23 shooting in a December 2020 matchup.

Teammates notice his intense work ethic in practice, and see big things in his future.

“He’s going to be one of the best defenders in the league,” George Hill told Forbes.

The 6’3, 215lb guard will rarely light up the stat sheet, but he still averaged a solid 14 points-per-game this season, on shooting 38.7 percent from the field and 34.3 percent from three. While his offensive stats aren’t eye popping, his presence is always felt and asserted on the defensive end. His defensive rating this season was 111.6, right around league average, on a team that was the 24th-ranked defence in the league.

Dort held opponents to an average of 43.8 percent total field-goal percentage. He excelled in defending on the perimeter, holding shooters to 37.3 per cent in shots from beyond 15 feet, and 35.6 percent from beyond the arc.

“When Shai Gilgeous-Alexander went down with an injury this season, we saw what Lu Dort can do with the ball in his hands,” says Dwight Walton, former Canadian National team player and contributor with TSN. “We see he can make decisions off screen roll action, he can put his head down and get to the basket with his strength; you have to be able to make shots at all three levels in the NBA and he’s much improved on that.”

But basketball fans from Montreal have had their eyes on another local baller, and one who plays much closer to home. Toronto Raptors center Chris Boucher won a championship with Canada’s team in 2019 and has been thriving since. Born in Saint Lucia but raised in Montreal, Boucher conquered homelesness and severe injury to carve out a place in a competitive Raptors side.

After winning G League MVP and Defensive Player of the Year in 2019, Boucher has earned the trust of head coach Nick Nurse with efficient shooting, both inside and outside, and impressive shot-blocking ability. In 58 games played this season, 14 of which he started, he averaged 13.6 points and 6.7 rebounds, shooting 51.4 percent from the field and 38.3 percent from three-point range.

The strong relationship between Boucher and Nurse should translate well to the Canadian National Basketball Team with Nurse at the helm.

“I expect big things from the likes of Boucher and Dort,” Walton says. “Once you have success on both ends of the court in the NBA, as they’ve displayed, it should translate well to the international level.”

The Raptors and Team Canada bench boss is getting a good look at another potential part of the team he’ll take into Olympic qualifying this summer in Khem Birch. Signed off the buyout market on April 10, Birch has been somewhat of a revelation to Toronto since his arrival from a dismal Orlando Magic team.

Birch averaged 11.9 points-per-game with the Raptors, over twice as much as he averaged with the Magic, as well as 7.6 rebounds. He shot at a 55.6 percent clip, and 29 percent from three, after averaging only 19 percent under Steve Clifford.

“Khem’s role has expanded with the Raptors, and he’s had a chance to showcase his skills freely at the center position,” Walton says. “He’s now able to play through his mistakes and he’s not afraid to try stuff, and you can really see it in his decision making.”

Birch’s breakout has come at a good time for both the Raptors and Team Canada, as he presents a reliable option for the frontcourt, that is capable of doing a multitude of things on both sides of the ball. The Boucher-Birch duo has been a bright spot in a rather dark season for the Raptors and could be something to watch out for with the national team.

Karim Mane became the first player to make the jump from CEGEP to the NBA when he signed a two-way deal with the Magic as an undrafted free-agent following the 2020 Draft. He appeared in 10 games with the Magic this season, scoring 11 points and grabbing 14 boards. He also helped Orlando’s G League affiliate, the Lakeland Magic, capture the 2021 G League title before he was unfortunately waived by the organization in April.

“Montreal has always had the talent, but I think ballers from Montreal are finally believing in themselves,” Walton says. “After seeing guys in the NBA that are from their city, the goal for our young players is not only getting a college scholarship, but getting to the league as well.”

The future of Canadian basketball has never looked brighter, with young stars like Jamal Murray and RJ Barrett making waves around the NBA. Throw in the raw potential of a unique player like Dort and the established and effective presence of Boucher and Birch, Montreal’s contribution to the Canadian national team might lead them to a special summer in Tokyo.