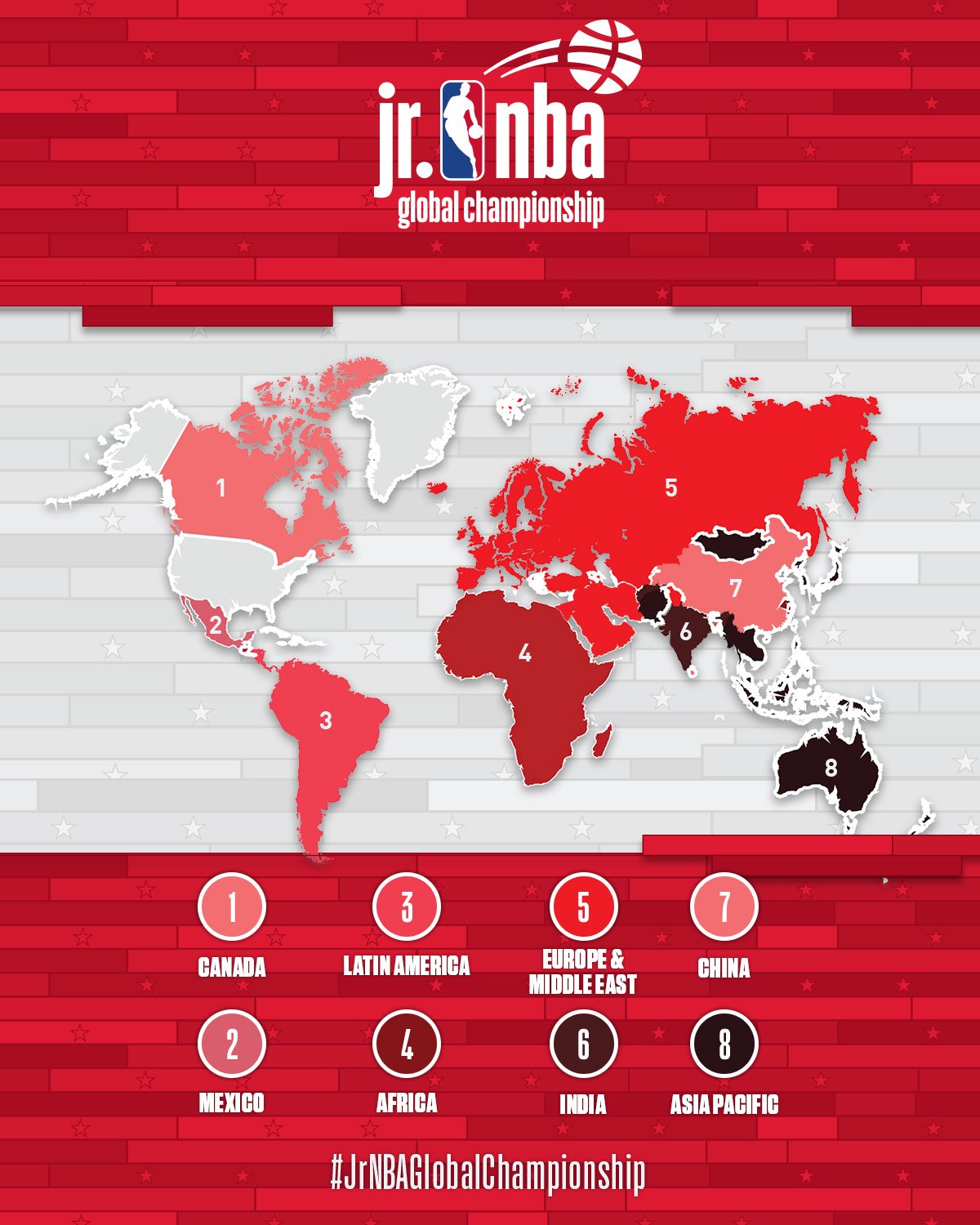 – Club Teams From All 10 Provinces To Compete in Regional Tournaments Across the Country, In Partnership With Canada Basketball

TORONTO, Dec. 18, 2018 – The National Basketball Association (NBA) today announced details of the second annual Jr. NBA Global Championship, a youth basketball tournament for the top 13- and 14-year-old boys and girls teams from around the world that will be held Aug. 6-11 at ESPN Wide World of Sports Complex at Walt Disney World near Orlando, Fla.  Thirty-two teams will participate in a week of on-court competition and off-court programming centered on the Jr. NBA’s core values of teamwork, respect, determination and community.

Hosted in partnership with Canada Basketball, provincial cup champions from all 10 provinces will compete in regional tournaments across the country starting in April 2019.  The winning girls and boys teams from each provincial cup will advance to represent Western Canada, the Prairies, Ontario, Eastern Canada, and the Atlantic Provinces at the Jr. NBA Global Championship Canada Regional Finals in Ontario in June 2019.

The Jr. NBA Global Championship Canada Regional Finals will feature single elimination games to determine the boys and girls teams that will represent Canada in Orlando. In the inaugural Jr. NBA Global Championship, the Welland Warriors (girls) advanced to the international semifinals, and the Brampton Breakdown (boys) advanced to the international finals. Locations and dates for regional tournaments will be announced at a later date.

Qualifying competition across Canada will tip off in January 2019 and run through June 2019.  In the U.S., the NBA will introduce more than 20 new local tournaments – 14 of which will be hosted by NBA teams in their respective markets.

The winning boys and girls teams from each of the eight U.S. regional tournaments (Central, Mid-Atlantic, Midwest, Northeast, Northwest, South, Southeast and West) and the boys and girls teams representing the eight international regions (Africa, Asia Pacific, Canada, China, Europe & Middle East, India, Latin America and Mexico) will receive all-expenses-paid trips to compete in the culminating event in Orlando. U.S. teams will have the opportunity to register online for a chance to compete in their respective regional tournament.

“We are looking forward to building on the success of the inaugural Jr. NBA Global Championship to host another best-in-class event.  The expanded programming and new strategic partnerships will allow more youth players from around the world to participate in this year’s event and have the opportunity to showcase their talents on a global stage.”

“Following a successful first year of the Jr. NBA Global Championship, we’re thrilled to offer Canadian girls and boys with even more opportunities to compete and develop their skills on and off the court. Together with Canada Basketball we’re proud to strengthen our investment in grassroots development, benefitting youth across the country.”

“Canada Basketball is excited to once again partner with the NBA on the Jr. NBA Global Championship Canada Regional Finals. Basketball continues to grow in our country and club-based national championships are an important component for the development of youth basketball in Canada.”

“I attended last year’s Jr. NBA Global Championship and it was incredible to witness the talent and passion displayed by boys and girls from around the world.  This event offers a unique opportunity for young players to learn about different cultures while bonding through their love of the game.”

“I’m thrilled to return as an ambassador for the Jr. NBA Global Championship, which is an amazing showcase and development opportunity for talented young players. I’m proud to support a program that will help advance the growth of girls basketball at all levels.”

About the Jr. NBA in Canada

The Jr. NBA Youth Basketball (JNYB) program is the league’s youth basketball participation program in Canada that provides a fun environment for kids ages 5-12 to learn the fundamentals and values of the game. The JNYB is focused on helping grow and improve the youth basketball experience for players, coaches and parents. The inaugural Jr. NBA Global Championship, a first-of-its kind youth basketball tournament for top 13- and 14-year-old boys and girls teams from around the world, took place in August 2018. Through a network of affiliated youth basketball organizations and programs, the Jr. NBA program has reached more than five million youth ages 5-14 in the U.S. and Canada since launching its expanded efforts in October 2015. For more information and to register for the Jr. NBA, visit www.JrNBA.ca.

The NBA is a global sports and media business built around four professional sports leagues: the National Basketball Association, the Women’s National Basketball Association, the NBA G League and the NBA 2K League. The NBA has established a major international presence with games and programming in 215 countries and territories in 50 languages, and merchandise for sale in more than 100,000 stores in 100 countries on six continents. NBA rosters at the start of the 2018-19 season featured 108 international players from 42 countries and territories. NBA Digital’s assets include NBA TV, NBA.com, the NBA App and NBA League Pass. The NBA has created one of the largest social media communities in the world, with 1.5 billion likes and followers globally across all league, team, and player platforms. Through NBA Cares, the league addresses important social issues by working with internationally recognized youth-serving organizations that support education, youth and family development, and health-related causes.