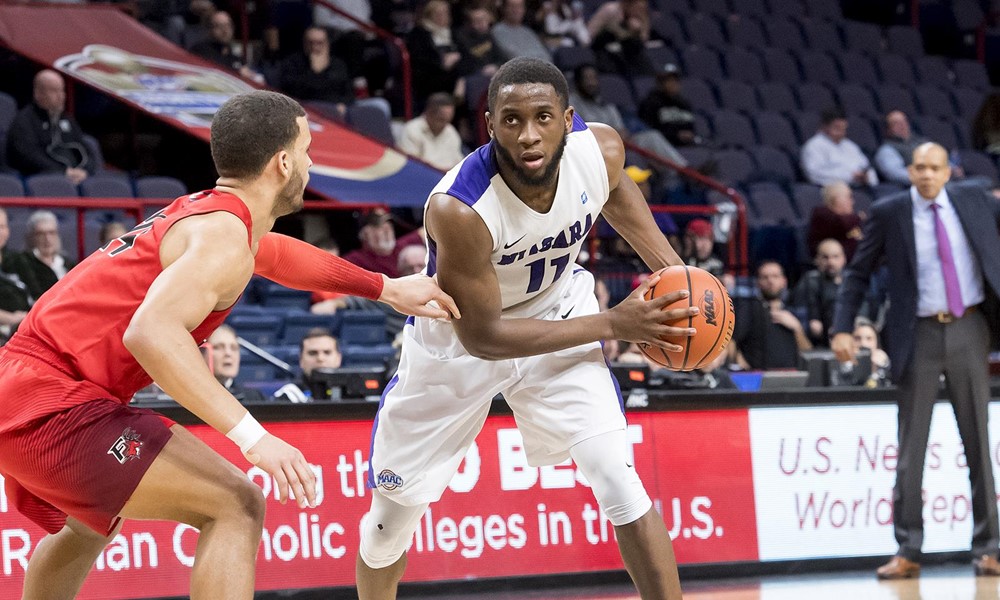 By Chris MckeeOctober 29, 2018No Comments

You can’t stay in your corner of the forest waiting for others to come to you. You have to go to them sometimes – A.A Milne

The Niagara Purple Eagles seem to have to been sitting in their part of the forest for the better part of the past decade. Niagara University has only had two winning seasons over the past 10 years and they haven’t made an appearance in the NCAA tournament since 2007.

Although last years 19-14 record under sixth year head coach Chris Casey wasn’t the stuff of national headlines like a man travelling in a barrel over the Niagara Falls, it certainly was reason for optimism for Purple Eagles fans throughout the Niagara region.

Casey began his coaching career as an assistant at Central Connecticut back in 1986 and has coached at every level of college basketball throughout his 32-year career.

After five seasons of building, Casey looks to have turned the corner with his program and has his Purple Eagles squad in a position to be in the middle of the fight for the MAAC title come March.

Casey said, “You always have to go through things to get good at them.”

Many teams in college basketball end up taking on the personality of their head coach. Casey is likeable, charismatic and as hard working as they come which he says was instilled in him by his late father and is evident by his grind throughout the coaching ranks before landing the job at Niagara.

My interview with @NiagaraMBB head coach @NUCoachCasey who tells a great story about sending his resume to legendary @UNC_Basketball coach Dean Smith back in the 80’s. Look out for my article tomorrow on @T101Sports pic.twitter.com/Kxs4oitbL7

After a solid 2017-18 season, Niagara looks poised for a breakout year and will be led on the floor by a trio of upperclassmen.

6-foot-7 senior forward Marvin Prochet led the conference in total rebounds and defensive rebounds as well as double-doubles and he should be in contention for all-conference accolades by the end of the season along with 6-foot-8 senior forward Dominic Robb who played in 33 games last year and was second in the MAAC in blocks with 48.

5-foot-10 junior guard James Towns will also be counted on heavily this season to be an impact player. Casey said, “He’s getting the keys to the car and I expect him to step into a prominent role.”

Casey also pointed to several youngsters on his roster to be key contributors including freshmen guards Dominik Fragala and Raheem Solomon. Fragala was the leading scorer in the state of Virginia during his senior year of high school while Solomon led his high school to three state titles.

Niagara will also feature incoming Canadian freshman Steve Levniac who was part of the 2018 OSBA champions TRC Academy in Brantford, ON.

“Our goal is the same every year and that is to win the conference and get to the NCAA tournament,” said Casey.

For the first time in many years there seems to hope and optimism surrounding the Niagara program and that conviction and belief starts at the top with Casey and has trickled down to the players and students at Niagara University.

Watch out for the Purple Eagles to be legitimate contenders to win the MAAC and make a push towards the NCAA tournament come March.

The Future of Canadian Basketball in the Paint, Part 3: Zach Edey