The Canadian men’s head coach made his affection for shooters be known throughout the Pan American Games last month – first by voicing it, then by showing it through his rotations.

The undersized – at least by professional standards – Brady Heslip provided the starkest example, regularly splashing on opponents while eating up the majority of the minutes at shooting guard despite modest playmaking and defensive abilities.

It should perhaps come as no surprise then that Nik Stauskas – a player who mirrors Heslip yet is bigger, stronger and taller – is projected by many Canadian media outlets to start at the two when Canada attempts to qualify for the 2016 Olympics through the FIBA Americas in Mexico City beginning August 31.

Coming off a trying rookie season, and with Heslip’s success under Triano fresh in mind, Stauskas noted the opportunity on hand.

“Brady really thrives in this style of play especially with his shooting and ability to space the floor,” said Stauskas on August 14 when the team’s training camp opened at the Air Canada Centre.

“I feel like it would even be cool to see both of us on the floor at the same time and have both wings really just spread the floor out.”

Team Canada: ALL IN!

Following a solid two-year career with the Michigan Wolverines, the Mississauga, Ont. product averaged just 4.4 points per game in 15.4 minutes of action in his rookie season playing for the perplexing Sacramento Kings – a team in constant flux.

The Kings had three different head coaches last year and still have yet to put together the final members of its front office despite in-season changes.

So while Stauskas was dealt to the lowly Philadelphia 76ers at the conclusion of a disappointing first year in the league that saw little stability, structure, or on-court production, the six-foot-six guard doesn’t intend to make the Olympic-qualifiers a personal statement.

“My only goal is to win and to qualify for the Olympics. I think that’s everyone’s main goal here,” said the 21-year-old.  “Coach Triano talked about how there’s got to be sacrifice – not everyone’s going to have the role they want.

“Not everyone is going to play the minutes they want but the main thing is just getting to the Olympics next year.”

Canada is aiming for a top two tournament placement to qualify for Rio and while it remains to be seen how exactly this young core group of players will mesh together against older and more seasoned opponents, it seems almost inevitable that Stauskas will find himself in an increased role and better position to succeed come his sophomore season in the NBA.

Brett Brown, the head coach of the 76ers, repeatedly voiced his intention to target Stauskas with the tenth pick back in the 2014 draft. And with the coach getting his wish a year later – for a team that has a glaring need for a go-to wing scorer and shooter – the sniper seems as optimistic as ever he will finally get his chance to make his mark.

“It’s great that he likes my game and that he has confidence in me,” said Stauskas at the Las Vegas Summer League to Bob Cooney of the Philadelphia Daily News. “I can prove him right and come in this year and produce the way he wants me to.”

Canada has the first day off in the tournament then begin play September 1 against Argentina. 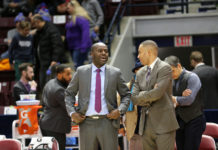 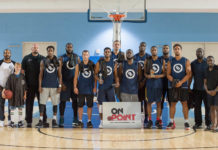 Team On Point clinches inaugural On Point Summer Pro Am 80-73...