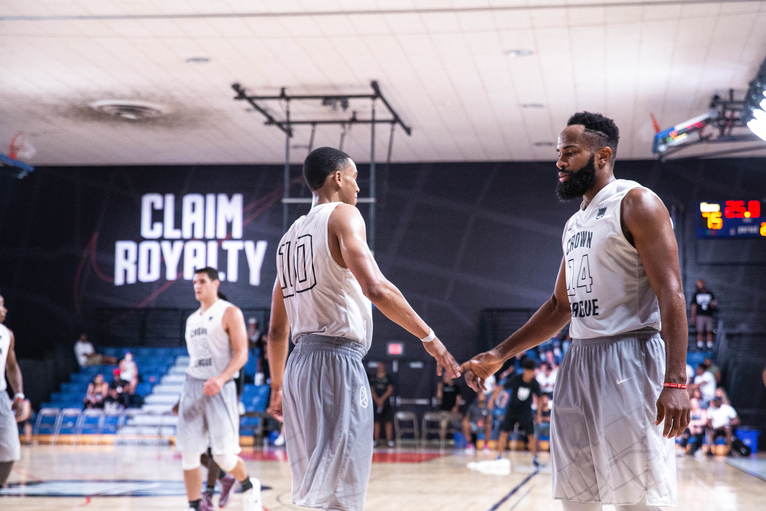 Week two of Nike Crown League in Kerr Hall at Ryerson University saw a pair of comfortable victories and one game that went right down to the very last tenth of a second.

Behind a sparkling performance from behind the arc, 6man (1-1) got their first win in Crown League, hitting 14 threes in a 76-57 win over 1 Love T.O. Danilo Djuricic led the way with 17 points on five made threes while Jean-Victor Mukuma had 15.

6man led in double digits for the majority of the first half and to begin the second half before 1 Love T.O. went on a 13-1 run to tie the game at 43, on a pair of free throws from Jalen Poyser. Mukuma, however, answered with a triple to retake a lead in which 6 Man would not relinquish for the game. That triple sparked a game changing 25-6 run.

Josh Collins led 1 Love with 14 points as they look to put this loss behind them in what will be a crucial matchup on Friday against CIA Bounce.

Duane Notice could not be stopped, scoring a game 25 points for Northern Kings (2-0) as they held off ACE (0-2), 72-64. Notice was aggressive from the start in looking for his offense as his relentlessness and tenacity on the glass proved too much for Team ACE to overwhelm.

Negus Webster-Chan, from Raptors 905, chipped in with 12 points on three made triples while Nick Lewis provided a huge boost in the second half with timely triples to stop any sort of momentum that ACE had.

Myck Kabongo scored 14 of his team high 21 points for ACE in the second half as they trailed from almost the very beginning despite keeping it within single digits for much of the game.

With three minutes to go in the game, Northern Kings were just up by three (56-53) as Adika Peter-McNeilly went to the line for two. He made the first before missing the second; however, he rebounded his own miss and ran to the corner where he promptly drained a massive triple.

That four point play effectively proved to be a major dent in ACE’s comeback attempt as Northern Kings held on the rest of the way.

ACE looks to keep their playoff hopes alive against unbeaten M.A.D.E. on Friday while Northern Kings look to remain perfect on Friday against 6 Man.

And now…the game of the night. It was a back-and-forth affair as CIA Bounce looked to get its first win against defending champion M.A.D.E. With CIA Bounce down two, Dylan Ennis missed the second free throw but grabbed the offensive rebound and looked to tie the game with three seconds left.

Enter Mike Fraser. The M.A.D.E. big man swatted it back to Ennis, who deflected it out of bounds, effectively ending any hopes of the game going into overtime, as M.A.D.E (2-0) won a nail biter, 73-71.

“It was huge because we did a terrible job rebounding like we did all game,” M.A.D.E guard Jermaine Anderson said. “Dylan made a perfect miss but Mike made an incredible play. And we took care of business.”

Jehvon Shepherd led M.A.D.E. with 26 points as his finishing around the rim was nothing short of spectacular.

“Jehvon is my brother,” Anderson said, referring to the both of them playing together for seven years. “I’m actually working him out now rather than working with him.

The effort spoiled an otherworldly performance from Ennis, who had a game high 28 points on four made triples for CIA Bounce (0-2) as he kept the defense off-balance with jumpers off the dribble, to the point where he was double teamed in the second half.

But it was the work of Anderson in that pivotal second half that swung the tide in favour of M.A.D.E., Anderson, AKA Rock, scored all 16 of his points in the second half, hitting four triples.

“I couldn’t make any shots (in the first half). When I hit the first one, I was like, ‘Finally,’” Anderson said. “Once the ball goes in, it gets your confidence going.”

Kassius Robertson, who was Player of the Week in Week 1, scored 11 first half points and hit three triples, while Raptors 905 player and Ryerson alum Aaron Best had 10.

CIA Bounce held a slim 39-36 lead at the half behind Ennis’ 14 first half points while Shepherd paced M.A.D.E with 13.

In a sign of things to come, Anderson hit his first shot and M.A.D.E slowly chipped away at the deficit, eventually taking the lead for good at 62-60 after Anderson made a pair of free throws.

Shepherd split a pair of free throws with 15 seconds left, putting M.A.D.E up 73-70 and Ennis got fouled on a three-point attempt. But after reviewing the play, the referees called it a foul on the floor, sending Ennis to the line for two instead of three shots.

Neither team led by more than six points. The biggest difference that stood out, however, was three point shooting, as M.A.D.E hit 10 threes compared to CIA Bounce’s seven.

The close win, however, made Anderson realize that consistency throughout the game has to be key for the rest of Crown League if they want to repeat as champions.

“We have a veteran group and we sometimes get complacent at times given that we’re older,” Anderson said. “If we focus and start the game with the right mentality, we’ll be alright.”

Anderson had high praise of Ennis’ game as well, as well as the talent that he has seen at Crown League this year.

“Even though we blitzed and trapped him, he still made the right plays,” Anderson said of Ennis. “He’s another good young talent and seeing the progression of these young guys has been amazing.”

CIA Bounce look to bounce back on Friday and keep their slim playoff hopes alive against 1 Love T.O. while M.A.D.E look to clean up on the glass and remain perfect against ACE.