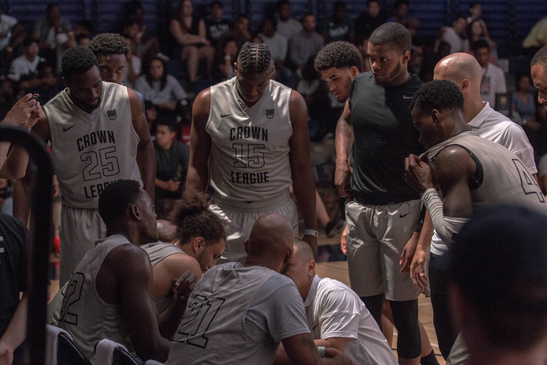 Week two of the Nike Crown League took off last Friday July 7th, 2017 at Ryerson University’s Kerr Hall, and a throng of local hoops supporters were on site to witness the city’s basketball unity. With more and more hoop heads catching wind of the tournament across the GTA, it was no surprise that week two had an even bigger turnout.

Behind a spectacular scoring display put on by former Ottawa Gee Gees’ star Johnny Berhanemeskel, ACE were able to outlast 6 Man 72-59. Berhanemeskel, who recently played for Saenz Horeca Araberri in the Spanish LEB League, recorded a game-high 25 points while connecting on six trifectas in the win. James Siakam did much of the brute work for ACE, finishing the night with a double-double of 12 points and 10 rebounds.

“It’s been my game since I’ve been in University,” said Berhanemeskel of the three-point shooting spectacle he displayed on Friday. “I’ve just been moving off the ball and playing off of others guys. I know if I need to have the ball in my hands or play off the ball, so I’m used to it. We’ve got a bunch of good guys on the team so if I just run out and they get me going then I’ll take it,” he said. “That’s just how I’ve been playing basketball for as long as I could remember.”

For 6 Man it was Ammanuel (Manny) Diressa’s 18-point performance that kept his team afloat during seemingly dry stretches. He and Berhanemeskel presented themselves as the central scoring options for their respective teams and proceeded to keep the crowd entertained with an impromptu one-on-one battle.

But despite it only being a one-point game at the half, 6man was unable to find additional scoring help in the latter stretches of the game, as they were outscored 43-29 in the final 16 minutes.

Manny Diressa poured in 18pts for 6 Man in the loss

The Northern Kings were able to squeeze past M.A.D.E. 74-71 in perhaps the most competitive and entertaining matchup of the three that took place on Friday. Though there were instances where it seemed each team had opportunities to pull away, neither club was able to grasp control of the game, ultimately changing leads 45 times throughout the contest.

Fresh off his first season in the NBA G-League (formerly the D-League), Negus Webster-Chan put on an all-around performance in front of a packed house, scoring 21 points to go along with eight boards and five assists. Though 18 of his 21 came in the first half, the Scarborough native swiftly adjusted to the second-half defence M.A.D.E. employed, finding teammates for easy looks both inside and on the perimeter and willing his team to the three-point victory.

Nick Lewis, one of the many recipients of Webster-Chan’s second half wizardry, added 20 points to the scoring column with 13 of those coming in the second half.

For Webster-Chan, the game was more than just a victory, it was also an opportunity to lead the younger players on his club and help cultivate a team-first atmosphere.

“I was telling the coaches that I’m trying to step up and be a leader for this team because we’ve got a lot of young guys,” he said following the win. “There’s guys coming out of college and some guys overseas so I was just trying to be a leader out there and control the tempo.”

Just hats off to my teammates, they put in the work today and we got a [win].”

Despite a valiant effort by 1 Love T.O to make things more competitive in the final 16 minutes, CIA Bounce had too much star power and held on for the 67-57 win to improve to 1-1 in league play. Xavier Rathan-Mayes, who just recently suited up for the New York Knicks Summer League team, showed his NBA-level abilities with a smooth triple-double of 10 points, 11 rebounds and 10 dimes. The Florida-State alum was the clear floor general for his club and made a concerted effort to utilize Syracuse commit Oshae Brissett’s raw talent. Brissett would go on to lead the scoring charge for CIA Bounce, erupting for 25 points and seven boards

Murphy Burnatowski was responsible for the bulk of the scoring load for 1 Love T.O on the night, recording 23 points while Dwayne Smith added 14 of his own to go along with nine rebounds. 1 Love T.O. were definitely missing the services of last week’s player of the week Brady Heslip (28pts), who was balling with the NBA’s Chicago Bulls Summer League squad in Las Vegas.

Xavier Rathan-Mayes notched a Triple Double in the Bounce victory