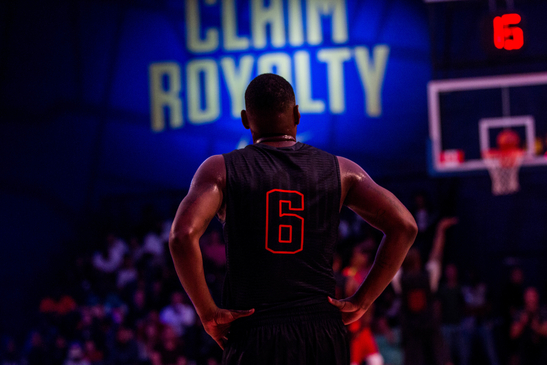 By Jaspreet GrewalJuly 17, 2017No Comments

Kyle Johnson got the wheels rolling early on for M.A.D.E., scoring the club’s first 11 points and leading them to the thirteen point advantage at the break. The second half showed to be a bit more of a dog fight, as a one-on-one battle between former Marquette star Junior Cadougan and feisty guard Freddy Appiah ensued and sent roars through the packed gym at Ryerson’s Kerr Hall. Though Cadougan took advantage of Appiah’s lack of size on multiple possessions, particularly in the final stretches of the game, CIA Bounce trimmed the deficit to 12 points due to a flurry of transition baskets courtesy of Oshae Brissett and Olu Ashaolu – the tandem chipped in with 27 and 21, respectively. But the combination of Johnson, Cadougan and former Ryerson Ram Aaron Best overwhelmed CIA Bounce, as the trio combined for 67 of their team’s total points, ultimately soaring to the 102-85 victory.

Johnson spoke about getting back to the basics after his club let one slip away last week against the Negus Webster-Chan led Northern Kings.

“We took a loss last week so we just wanted to come out aggressive both defensively and offensively, as well, just not hold the ball, [but] just run and gun,” he said following the win. “We were able to make shots early and just kept it going, it was good to come out with the win.”

“You know, if you win you go through, so after we lost last week and we saw the other teams lose and everybody was 1-1, we knew that this week coming in [if] you win, you’re through,” said Johnson. “You’re in control of your own destiny.”

In order to truly capture the essence of this matchup it’s only right we skip right to the final stretches of the game and recap the greatness that is Kelly Olynyk. The 7-footer, who recently inked a $50 million dollar deal to play alongside Hassan Whiteside in beautiful South Beach, Miami, didn’t play his best basketball early on, scoring only eight points on 2-10 shooting from the floor and laying an egg at the three-point line (0-5) in the first 16 minutes of action. But that didn’t prevent the Toronto native from grabbing the game by the horns when it counted.

1 Love TO found themselves down 63-56 with 10 minutes left in regulation before Olynyk began asserting his dominance. The big man punished ACE in the painted area on countless occasions, attracting a series of strong double teams seemingly every time he touched the ball. But despite the incessant defensive pressure by ACE, the Gonzaga alum willed his way to the basket possession after possession, scoring fade-away jumpers over his right shoulder and knocking down three-pointers at will. With just under a minute on the clock, Olynyk, who had already been to the stripe 22 times, would draw yet another foul on the way to the basket. Down 90-88, the former Celtic remarkably missed on both attempts before somehow grabbing the offensive rebound and gliding to the rim for an easy deuce, evening things up at 90.

ACE would have an opportunity to gain redemption after a string of sloppy possessions on the other end, but they would come up empty and regrettably leave a sliver of time on the game clock.

With 1.7 seconds left, Olynyk would use a screen at the top of the arc to eventually break free from the defence and bank in a game-winning trifecta to put away Ace 93-90 and send ripples across the Kerr Hall gymnasium.

The big man fittingly took the time to celebrate the win with the U19 Canadian team on the sidelines and even did his best James Harden ‘cook and stir the pot’ impression in front of the raucous crowd at Ryerson. The FIBA U19 Gold winning team players and coaches were special guests of the Crown League and were honoured at half time of Game 1 between M.A.D.E. & CIA Bounce.

After the game, Olynyk didn’t spend too much time talking about his late-game heroics, but rather used the opportunity to compliment his successors who recently won gold in Cairo, Egypt.

“It’s on the rise, it’s on the come up,” he said when asked about the growth of Canada Basketball, particularly on the heels of perhaps the program’s greatest accomplishment. “We’re going in the right direction and that’s all you can ask for. Those young guys are good; they’re really good. I wish we were that good at that age…the next few years is going to be fun.”

Kelly Olynyk of 1 Love TO

Behind another strong scoring display by the always-passionate Richard Amardi, 6 Man were able to defeat the Northern Kings 91-76. Amardi, who is not one to shy away from the limelight, scored 28 points (11/15 fg) to go along with nine rebounds as his club improved to 2-1 in league play. The NBL Canada standout earned the Nike Crown League Player of the Week award for his performance and will be a key determinant of how far his club goes during the playoffs.

For the Northern Kings, Negus Webster-Chan carried the load with 21 points and four rebounds, in another outstanding performance by the Scarborough native. Duane Notice scored 16 points, while Pittsburgh commit and Notice’s younger brother Marcus Carr had 10.

Crown League Player of the Week Richard Amardi of 6 Man