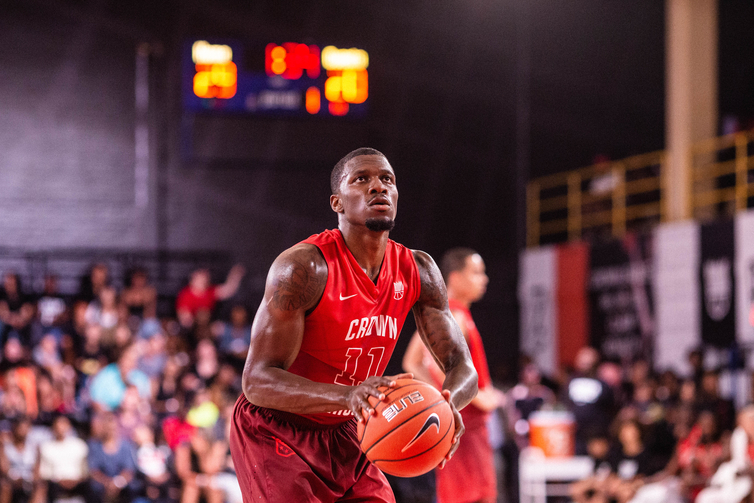 Week three saw four teams finish with the exact same record at 2-1 as the regular season of Year 4 of Crown League wrapped up on July 13 at Kerr Hall. Here’s what happened.

Walking into Crown League to cover the first game, I couldn’t help but notice something different about Dylan Ennis.

The man had a fresh cut. And that trademark blonde patch that he sports… was gone. Naturally, I had to ask him that.

“So when I go overseas, I don’t know what type of barber is over there. I don’t know if I’d get my hair cut the way I want it,” Ennis said, laughing. “Every time I come here in the summertime, I cut my hair and get a fresh start. I always put the blonde patch back in before my first game.”

The idea of a blonde patch came while Ennis was recovering from a broken foot during the 2016 offseason while with the University of Oregon. The inspiration? His then-girlfriend and now wife, Megan Ennis (nee Trinder).

“We sat down and I said I needed to do something different with my hair and she knew how to do blonde,” Ennis said.  “She throws it every time I need it to be done.”

“Some people are better in the college system and some people are better pro style,” Ennis said referring to Week 2 and 3. “The lane’s a lot bigger, quicker shots, more ball screens, and a lot more isolations. That’s my type of game and in both of those performances, I think people can see that now.”

1 Love T.O., with the win, advances to the semifinals after a thoroughly dominant second half led by Jalen Poyser’s 24 points.

“Well, it was one of those games where if we lose, we don’t get to play next week so it was do-or-die,” Poyser said. “We had to lock in in order to get this win; you don’t want to get knocked out and get sent home early.”

Poyser got the crowd up in the second half, including play-by-play commentator Akil Augustine going bonkers, with numerous difficult shots and a dunk that sparked the blowout.

“I just went up for a dunk and the momentum kind of changed after that,” Poyser said of the atmosphere. “The environment was crazy and everyone was excited, which is good for Toronto and Crown League.”

Poyser says he has gotten a lot of positive advice from the pros at Crown League and that has helped expedite his game.

“They just tell me to keep being aggressive and not take your foot off the acceleration,” Poyser said. “They tell me to play my regular game at all times.”

Poyser redshirted his junior season after transferring from UNLV to St. Bonaventure, practicing against one of the top backcourts last season in Jaylen Adams (Atlanta Hawks) and Matt Mobley (Utah Jazz). He is expected to step in and fill the void that the both of them left this upcoming season.

Meanwhile, after spending stints with three teams (two in Serbia, one in Spain) during his first professional season, Ennis signed a one-year deal with Spanish club MoraBanc Andorra, where he heads to on August 12.

“It was great. I got to play on a lot of teams and I learned a lot,” Ennis said. “I learned the European game and going to Andorra and playing in the Euro Cup and the ACB, I’ve got a different experience than most first-year guys because I was in three different situations.

Ennis also talked about his younger brother Tyler Ennis, who was recently waived by the Los Angeles Lakers and has now signed with Fenerbahce of the Turkish Basketball Super League.

“He’s been put in a lot of tough situations but he’s matured and kept his head up,” Ennis said about his younger brother. “He’s going to find his niche and be more successful than he is now.”

The elder Ennis says if there’s one thing he needs to work on this upcoming season at Andorra, it’s his facilitating.

“I have a real knack for scoring but I definitely want to make sure that I work on setting the table and keeping everybody happy,” Ennis said. “When you score the ball like I can, you get a little shot-happy but I want to keep my turnover to assist ratio right and get everyone involved.”

Defending champion M.A.D.E. headed into this game as one of the two remaining unbeaten teams in Crown League. It looked like, based on standings, that this would be another win against winless ACE.

ACE (1-2) ended the regular season on a high note despite being eliminated from playoff contention with an emphatic 87-59 win over M.A.D.E. (2-1), led by Keane’s 32 points. The Raptors 905 guard and Carleton University alum, became the first player in this season’s Crown League to score over 30 points.

Junior Cadougan led M.A.D.E. with 20 points while Daniel Mullings had 19 in the loss. Former NBA player Joel Anthony made an appearance for M.A.D.E. and protected the paint with force, swatting away numerous shots.

ACE held a double-digit lead for most of the game and extended that lead in the second half on the strength of three triples from Kenny Ejim and 16 second half points from Keane. The closest that M.A.D.E. cut it to in the half was 10.

6Man (86) vs. Northern Kings (79): Adika Peter-McNeilly Chimes In Plus Jalyn Pennie Introduces himself in Thunderous Fashion

A familiar face made an appearance at Crown League for 6Man and his name was Bruno Caboclo.

The former Raptors forward led all scorers with 21 points as 6Man ended Northern Kings’ unbeaten run with a 86-79 victory in the final game of the night. Richard Amardi led the attack for 6Man to start it off with 14 first half points.

However, the highlight of the night belonged to someone who, for sure, made everyone at Crown League knew who he was after what he pulled off. Remember the name Jalyn Pennie.

On a busted possession for 6Man midway through the second half, the former New Mexico State and Cal State LA product scooped up the ball and rose up for a thunderous poster over Peter-McNeilly, sending the crowd and the 6Man bench into a frenzy.

“I was trying to get the bucket,” Pennie said about the dunk as he dropped seven points in the win. “And I saw he (Peter-McNeilly) was trying to come over and block it so I had to go up strong.”

Although Pennie kind of held back after the highlight reel play, he did admit it was exciting to see the reaction around him.

“It felt good,” Pennie said, smiling. “It got the gym excited and got our team going.”

Pennie, who also plays in the On Point Summer League Pro-Am, noticed that when he hit a triple on the next possession, Augustine told the crowd, ‘And he can shoot too.’

“A little bit,” Pennie admitted when asked if he took that as a slight. “A lot of people think that because you’re athletic, you can’t shoot. So I try to do a bit of both.”

Pennie says that the presence of guys like Amardi and Caboclo allow the pressure to be taken off of him and showcase his game.

“I felt real loose. Not a lot of people know my name so I just come in here and play,” Pennie said. “Show out and hopefully people like my game.”

Duane Notice and Peter-McNeilly led Northern Kings with 20 points apiece in the loss but the close loss will play a major factor in seeding for the playoffs on July 20.

“Whenever we play in Crown League, we want to show up for the fans and represent what city we’re from,” Peter-McNeilly said about Northern Kings. “We just played hard to the end because we know point differential matters so hopefully that helps out in the seeding for the playoffs.”

Keane may have been the most recent player to experience being part of the pros after transferring from an American to a Canadian college. But Peter-McNeilly also made that transition, going to Ryerson University after playing the 2012-13 season at Clarendon College in Texas.

“I grew up a lot; it was the first time I was away from home,” Peter-McNeilly said of the one season he spent at Clarendon. “I learned to play the game at a more higher pace, and be more physical.”

Peter-McNeilly says that his shooting was the skill that improved the most during his career at Ryerson University, as he finished his Canadian University career, shooting 40.8 per cent (150-368) from behind the arc. He was a three-time U Sports All-Star, named twice to the All-OUA First Team (2016, 2017), and was named to the All-Canada First Team in 2017.

Peter-McNeilly credits Ryerson head coach Roy Rana for the strides he made on and off the court.

“Playing under Coach Rana for four years helped me see the game differently and become a better basketball player,” Peter-McNeilly said. “He also taught me a lot of things on defense and coming in every day working hard. And working hard is a skill in itself.”

The 25-year-old Scarborough, Ont., native played his first professional season (2017-18) with the MHP Riesen Ludwigsburg in the German Bundesliga and averaged 8.5 ppg in 62 games with them. He says it was a crazy year, not knowing what to expect given that it was his first time overseas.

“I came in there with an open mind and wanting to learn,” Peter-McNeilly said of his time there. “As a rookie, I had my ups and downs but my teammates and my family back home were really good supporting me. I was learning what it means to be a professional athlete.”

Peter-McNeilly says that bringing the consistency and having no let downs was key in playing at the pro level and having to fight for everything. That, combined with the underdog mentality, led the Ryerson alumn to sign his next deal with fellow Bundesliga side Mitteldeutscher BC.

“People always looked over me and I felt like MBC was the best place to settle myself and prove what I can do,” Peter-McNeilly said. “I was talking to the coach and when I head there next month, I’m going to be all ears and learn.”

He says there’s a lot to work on for his next professional season but intends to work on everything one day at a time instead of tackling everything at once.

Despite guys like himself, Keane, and fellow Ryerson alumni Aaron Best making it to the pros through Canadian universities, Peter-McNeilly admits that the stigma of college/university basketball in Canada not being good enough will always be there.

Although a lot of people were surprised at him coming back, he says it was the best situation for him to go to Ryerson.

“I was able to play professional basketball after playing under Coach Rana for four years, staying home, and getting a good degree,” Peter-McNeilly said. “It just depends on the person really. I feel like that was a good decision that I made (coming back) and from there, the ball kept rolling.”