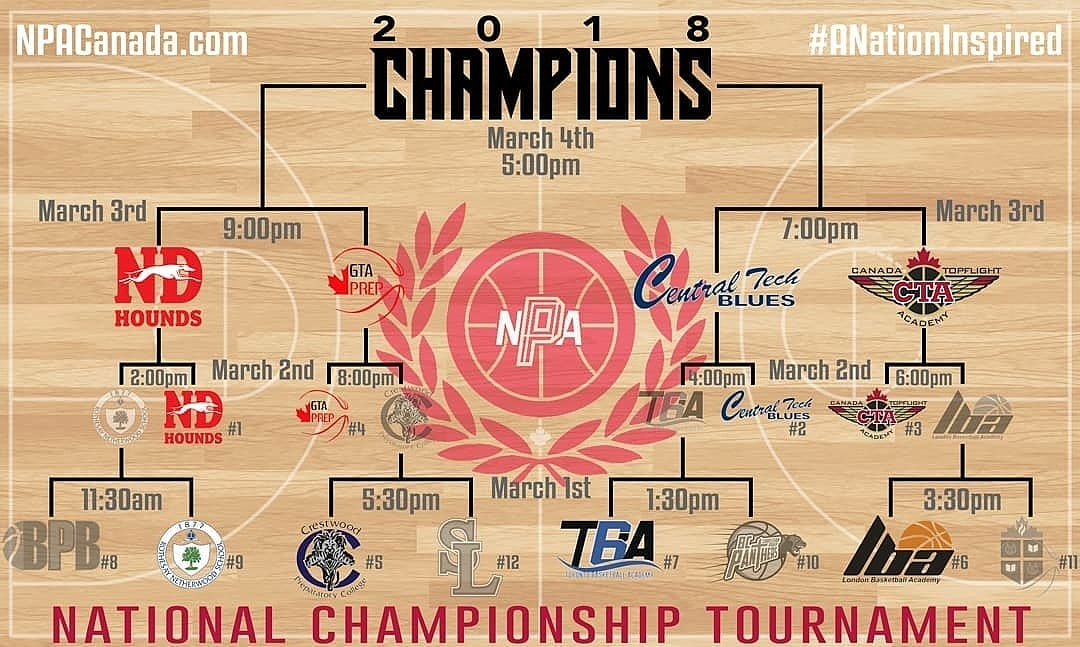 By Teru IkedaMarch 3, 2018No Comments

(Brampton, On) In the first semi-final game at 7 pm, the Notre Dame Hounds (Saskatchewan) will be battling GTA Prep, followed by Central Tech Prep playing against the defending champions, Canada Topflight Academy (Ottawa) at 9 pm.

Though Ontario is the hub of Canadian basketball, the Hounds will be doggedly determined to bring the NPA hardware to the Prairies. Star player, Jashon Henry, has received only one mid-major offer from St. Bonaventure, and teammate, Fofo Adetogun, has received no D1 offers yet. Despite the Hounds being undefeated in the regular season, they will play against GTA Prep with an underdog’s mentality.

In the quarterfinals, GTA Prep emerged victorious after a back-and-forth affair against a tough Crestwood Prep squad. Key plays in the 4th quarter were both made by Brampton natives, A.J. Lawson and Kaosi Ezeagu. With 52.1 seconds left in the 4th quarter, A.J. Lawson pulled up for a quick three off an inbound pass and buried it with the foul. He made the free throw, giving GTA Prep a six point lead.

With less than 35 seconds left, Ezeagu made a statement defensive play; Crestwood’s Jahcobi Neath stole the ball and attempted a lay-up, only to have Ezeagu pin the ball against the glass. This was the biggest block out of the 6 he had in the night. Standing 6’10’’ and weighing 230 lbs., he has a pro’s build. His athleticism will shine at both ends of the floor — the ability to slam back his monster offensive rebounds and his defensive presence in the paint will change the flow of any game he’s involved in.

A.J. Lawson’s stock continues to rise, having recently showcased his talents at the FIBA Basketball Without Borders Global Camp in Los Angeles during NBA All-Star Weekend where he was named a tournament All-Star. In the quarterfinal game, he ran coast-to-coast like a track star and effortlessly got to the hoop. He was a dangerous scoring threat from beyond the arc, but most impressively, he resorted to his playmaking ability when he struggled. In the 1st quarter, he had only 1 point, but his ability to push the offensive tempo created many easy baskets for his teammates.

In the second semifinal, Central Tech will play Canada Topflight Academy. Central Tech does not have a star player at the calibre of Henry or Lawson, however, Central Tech is greater than the sum of its parts. Each player has an indispensable asset, summed up in one word that they contribute to the team.

Reid and Sullivan will relentlessly attack the hoop. Daves is a strong inside presence and also executes the pick and roll perfectly. The Blues may rely on its undersized guard, Adeboboye, for late-game heroics and other scoring options exist in Khalid Ismail and Nas Roberts.

Despite Canada Topflight Academy (CTA) winning the inaugural NPA championship last year, Toronto’s basketball success overshadows Ottawa’s. They will rely on David Muila inside and will play with a chip on their shoulders, looking to etch Ottawa basketball into the national prep basketball consciousness once again. Stellar player and NPA Canada Academic Player of the Year Aiden Warnholtz will also look to exert his will from the point guard position for CTA.

The battle for the national crown will continue in the semi-finals Saturday March 3rd.