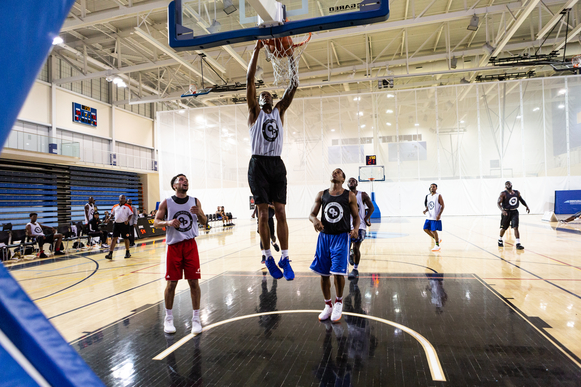 By Kajan ThiruthanikasalamJuly 8, 2018No Comments

Season 2 of the On Point Summer Pro-Am continued Wednesday night at the Toronto Pan Am Centre as Toben and On Point each went 2-0 while United picked up their first win of the season in a week where every game was decided by nine points each.

TEAM ON POINT AND TEAM TOBEN CONTINUE THEIR WINNING WAYS

Team Toben and Team On Point continued to separate themselves as the cream of the crop after each winning their second consecutive game in wire-to-wire fashion.

Toben (2-0) went on a 21-9 run midway through the first half to hold a comfortable lead throughout much of the game against Team X-Men (1-1). They eventually won, 77-68, in a game that was more lopsided than the final score indicated, with X-Men making the outcome more respectable by closing out the game with nine straight points.

X-Men were limited to just 36 per cent shooting from the field, with Jayden Frederick and Funsho Dimeji the only players on the team to shoot over 50 per cent overall. Toben had a 9-1 edge at the charity stripe and a massive edge on the boards (43-32) in the win.

James Siakam led Toben with 17 points and two steals while also showcasing his range, hitting two out of three attempts from behind the arc. Dinjyl Walker hit four threes and had 16 points while Anthony Ottley Jr. finished with a game high 13 rebounds.

The balanced effort from Toben spoiled a spectacular performance from Frederick as he led all scorers with 24 points on six made triples in the loss.

M.A.D.E went nearly five minutes before hitting their first field goal but had fought back to tie the game at 43 early in the second half. However, they could never pull ahead.

Both teams shot over 50 per cent from the field and didn’t shoot well from behind the arc but the difference in the game came on the glass (31-23) and the free throw line (23-13), with Team On Point having the edge decisively in those categories.

Jalyn Pennie was instrumental in Team On Point’s victory, scoring 16 of his team high 20 points in the second half. He was one of four players from On Point to score in double figures as Alastair Cole had 15, Jamal Reynolds scored 14, and Jabs Newby chipped in with 12.

Another person to stuff the stat sheet in this game was Jaylen Babb-Harrison as he led five scorers in double figures with 20 points for M.A.D.E, with six rebounds, seven assists and a game high four steals.

Ryan Wright was perfect from the field (18 points; 8/8 FG) while Joel Ndondo had 12 points. Jahcobi Neath and Dyshawn Pierre each had 10 points in the loss.

July 18th cannot come soon enough as it’ll be the first time both Team Toben and Team On Point will face off against each other since last season’s championship game. As of now, both of those teams have not disappointed thus far.

Make no mistake here. If you’re a fan of tight defensive games, this was the game to watch with neither Team United or Starting 5 hitting 60 points, as both teams were seeking their first victory of the season.

However, like Toben and On Point did in their victories, United separated themselves from Starting 5 on the rebounding end, with a 36-25 advantage. United also hit four more field goals (25-21) and had four more assists (11-7).

Khalid Adam finished with a double-double for Team United, with 14 points and 10 rebounds as his presence on the interior was massive on a night where offence was a struggle for both teams.

Yusuf Ali had an efficient 13 points and a game high five assists as he was the steadying presence at the point for Team United. Liban Mohamed heated up late, scoring eight of his 10 points in the final three minutes of the game, hitting two clutch triples to seal the win.

Kordell Charles was the only Starting 5 player to score in double figures, finishing with a game high 16 points. Dane Quest led the team with seven rebounds while Ritchie Kanza had a team high four assists in defeat.

M.A.D.E and Starting 5 face off, with both teams still looking for their first victory of the season while Toben and On Point look to continue their perfect seasons against United and X-Men, respectively, who look to pull off upsets.