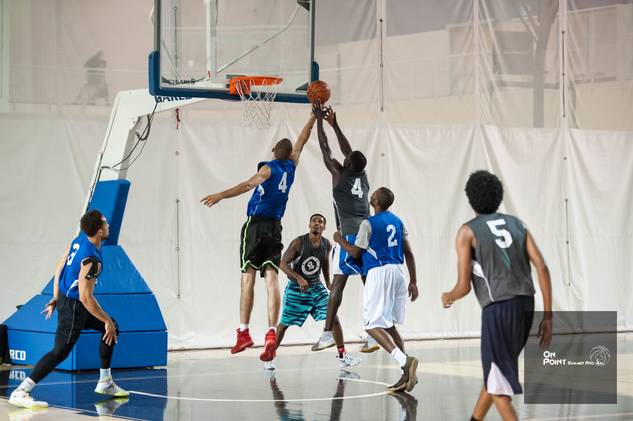 Week 2 (July 5th, 2017) of the inaugural On-Point Summer League Pro-Am, hosted by the Toronto Pan Am Sports Centre, saw one team remain unbeaten in a close game and two blowout victories, with one in shocking fashion.

In the first game. Toben (1-1) had a near wire-to-wire victory in their 83-54 thumping of United (0-2). Forwards Denny McDonald (17 points, 11 rebounds) and Richard Armadi (15 points, 14 rebounds) paced Toben with double-doubles. Guards Gilbert Gyamfi and Joshua Collins scored 14 apiece while guard Dinjyl Walker rounded out the five players scoring in double digits with 11. Collins also had a game high four assists and four steals while centre Taylor Dowhanuik had a game high three blocks.

After being down 2-0, Toben rattled off 18 of the next 20 points to pull away. They were up by double digits the rest of the game. United did cut it to 13 late before Toben closed out the game on a 22-7 run.

The second game saw a tight affair between On Point and X-Men. Despite X-Men being up by 13 late in the second half, a scoring drought cost them as On-Point rallied for a 76-68 victory to stay unbeaten.

With the win, On-Point (2-0) became the first team to clinch a berth in the postseason.

On Point guards Sefton Barrett and Jas Newby hit back to back clutch triples to break a 66-66 tie. Guard Jamal Reynolds led all scorers with 19 points while forward Marko Curic had 15 points along with a team high in rebounds (eight) and blocks (three). Newby had 10 points and a game high five assists and five steals.

For X-Men (1-1), four players scored in double figures. Khalil Miller led the team with 17 points and also had 11 rebounds along with a game high four blocks while guard Julius Antoine had 12 points and tied with a team-high four assists (with guard Nick Lewis) but also had eight turnovers. Forwards Joseph Wani and Jayden Frederick had 11 apiece; Wani also had a game-high 12 rebounds in the loss.

Team X-Men continued its momentum, going up by 10 (49-39) early in the second half, with Antoine reeling off eight straight points at one point. X-Men took their biggest lead at 13 (64-51) before going scoreless for almost seven minutes as On Point roared back to tie and eventually steal the game.

ON POINT PERFORMER: Jamal Reynolds of On Point 19pts 7rebs

In what was easily the most shocking game of the night, Starting 5 (1-1) pulled off a rather comfortable 82-64 win over powerhouse M.A.D.E (1-1). Starting 5 shot almost 57 per cent from the field despite committing 19 turnovers.

Forwards Jahmal McQueen and James Siakam led the way for Starting 5 with 16 points each while guard Ajahmo Clarke had 14 points off the bench. Siakam had a game-high two blocked shots while forward Kareem Milson had a game high 11 rebounds and guard Tamoy Lewis had a game-high eight assists. Lewis had more assists than M.A.D.E combined (six).

Poor shooting haunted M.A.D.E throughout the game as they shot 33 per cent from the field and 18.5 per cent from behind the arc. Forward Dyshawn Pierre had a game-high 18 points and a team-high eight boards along with a game-high four steals in the loss. Guard Kyle Johnson had 12 points (but on 17 shots) while Christian Casimier had 10 points.

Starting 5 led wire-to-wire in this game and were up by as many as 27 points in the second half. Despite M.A.D.E making it interesting by cutting the lead to 14, Starting 5 managed to hang on for the double digit victory.